Mallah hurt <em>Q and A</em>, but this tweet wrecked ’em

So just how does the ABC screen viewer-submitted tweets for Q&A? Myriam Robin and Josh Taylor report. 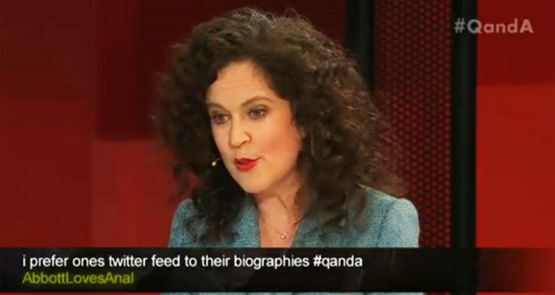 Should the public broadcaster be speculating about the Prime Minister’s sexual preferences on its flagship panel show? Communications Minister Malcolm Turnull certainly thinks not, slamming Q&A‘s “very poor supervision” after a tweet from a very saucy handle appeared on the bottom (ha!) of the screen last night.

Just weeks after making peace with the government for allowing convicted criminal and “terrorist sympathiser” Zaky Mallah to ask a question on Q&A, ABC managing director Mark Scott awoke to a call early this morning from Turnbull about another incident on the show last night, this time about a tweet from the Twitter handle “Abbottlovesanal”, which was displayed on screen.

It’s been reported Scott quickly texted the Prime Minister to apologise, although the ABC has yet to make an official statement. Tony Abbott told a news conference today that he hadn’t responded to Scott’s text, but echoed Turnbull’s calls for “tighter control” of the program.

Although the tweet itself was not offensive, the username did draw criticism from some Liberal MPs and conservative commentators. This morning, Turnbull told Crikey he had spoken to Scott “very early this morning” about the incident. “There is a certain Groundhog Day feeling about all this,” he said.

As part of its olive branch to the government for the Mallah saga, ABC agreed to move Q&A into the news and current affairs division of the ABC by the end of the year. Speaking this morning, Turnbull declined to be drawn on whether the show should keep its live tweets. “I will leave that to the ABC. It’s just very poor supervision. If you’re going to be having live tweets going up on the bottom of the screen, they’ve got to be screened very well,” he said.

Q&A‘s Twitter hashtag developed organically, but ballooned in usage after the program began showing tweets live on screen in May 2010. In 2011, then-RMIT academics Jock Given and Natalia Radywyl wrote a research paper that used interviews with the program’s senior staff to explain their thinking around live tweets, and went into a lot of detail about how the custom-built system they use, TweeVee TV, actually works.

To have the greatest relevance to the on-going discussion, it was decided tweets should be on-air within one minute of their being posted. Crikey understands tweets are often on air much faster than that — sometimes they’re live in as little as five seconds after being posted.

While there is pressure to get the tweets out quickly, there are at least two steps of human moderation before something gets featured. There are between 30,000 to 60,000 tweets sent with the Q&A hashtag (#qanda) every week. To help make these intelligible, TweeVee TV first filters out all tweets with links, replies and that are longer than 115 characters. Then, obscenity filters are applied to the body of the tweet itself, though not the Twitter handle. Lastly, the system weeds out everyone on a blacklist, which includes those with well-known parody accounts of Australian politicians and the like.

After this, a stream of interesting tweets is shown to a moderators who choose tweets that might be interesting to viewers. These are then sent to a more senior producer, who decides what goes to air. The whole process takes place very quickly, as there is the aforementioned pressure to get tweets on air before the discussion moves on.

In the paper, producer Amanda Collinge explained how this works:

“The two initial moderators are digging in big buckets … They pull out handfuls, read them as quickly as they can, they can’t fully check them all … They send some on to me, and I choose 40 to 50 [the numbers have increased since then to 80 to 100] for the whole show … those that are not obscene, those that value add, are smart, irreverent but not offensive … you just can’t read 35,000 in an hour … I have to concentrate on the discussion as well, marry the tweets to the discussion.”

Of course, given the pressure, mistakes happen. There have been a number of incidents in recent months where rather unfortunate things were put up on screen. For example, in October last year, the ABC ran and then apologised for a tweet referring to military group captain Cate McGregor as “he/she” (McGregor is transgender). The program has also previously aired tweets from accounts named TJonesPussyKing and Penisbandit69.

The decision to include tweets on the program has its critics. For example, in an email to the RMIT researchers, former Media Watch host Jonathan Holmes said:

“My initial reaction to the tweets on Q&A was very hostile. I thought it broke all the traditional rules of television: you don’t ask the audience to read one thing and listen to another … It’s about how people focus their attention. I was told I was very old-fashioned … But it has been very successful. Ratings are up and they have a big Twitter following. Lots of people are trying to get their tweets up on-air. I now feel quite conflicted about it. I just don’t read them.”

While many find the tweets distracting, it’s clear Q&A‘s ratings rose markedly after they were introduced, even though, in 2011, only 1% of viewers participated in the Twitter discussion. As news outlets have started to report on the Twitter reaction to the program, it’s become a handy marketing tool for the program.

Whether or not the live tweets will remain once the program is moved to the news and current affairs division remains an open question. Some, like former Media Watch executive producer and media critic David Salter, say leaving them up would set a strange precedent for the division, but Crikey understands from ABC insiders that no firm decision has been made yet.

Update: After Crikey’s deadline, an ABC spokesman confirmed Scott had sent Abbott an apology via text message, with a formal letter of apology to be mailed shortly. The ABC has also promised to remove the offensive tweet from rebroadcasts of Q&A on television and iView.

There was a companion tweet I saw repeating that he would do to get the job as PM. Anything except sell my ….

Perhaps they could’ve done a better job of supervision if their budget hadn’t been cut.

@ pinkocommierat, ain’t that the truth.

I find the tweets distracting so would be happy for them to disappear.

I hope the right don’t attempt to talk about political correctness ever again after this long tantrum over Q&A. The right have had their fee fees hurt, they’re butt-devastated. To top it off, they want to use the state to create a state broadcaster. So much for small government.

Not since dog-fucker sued chaser in the name of Free Speech has there been a funnier mess of contradictions.