Last year Joe Hockey claimed returning to surplus was a "moral imperative". Now it's all about tax cuts, despite the budget deficit worsening. 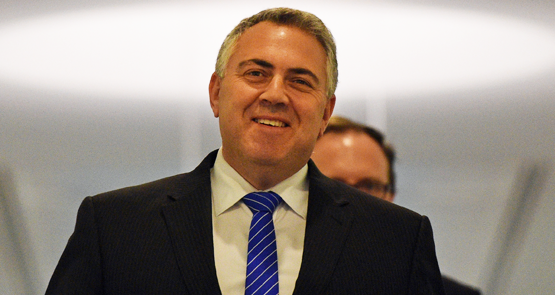 This is why the Abbott government has difficulty achieving anything, why it has had to abandon the field on tax reform, on reform of any kind, why it has spent most of its short life untrusted and unliked by voters.

Ahead of last year’s budget, Treasurer Joe Hockey got moralistic. As the fiscal disciplinarian of the government, he wanted to prepare voters for a tough budget, and he decided to do so in moral terms. “There is a strong economic and moral imperative to change course and to put the budget back onto a secure and sustainable footing,” he said at a conservative media event in April. Returning the budget to surplus was a matter of intergenerational equity — and morality. “This intergenerational aspect to the budget repair challenge has an inescapable moral dimension.”

Well, not so inescapable, apparently. Turns out you escape from it just by walking away from it. According to the Treasurer, talking to Steve Austin on ABC Brisbane yesterday, returning to surplus isn’t his highest priority anymore.

Austin: What’s the higher priority, delivering personal income tax cuts or returning the budget to surplus?
TREASURER:  Well, it’s both Steve.
Austin: But which is the priority, though?
TREASURER: We’ve got to try and do both. They’re not mutually exclusive.

So too has the “budget emergency”. Tony Abbott declared there was a “budget emergency” in 2013 when the forecast deficit was $18 billion and net debt was going to peak at 11.4% of GDP. Now we’re talking tax cuts.

As an Australian politician, you talk in terms of morality at your peril. Kevin Rudd’s abandonment of climate change as the “great moral and economic challenge of our time” because he couldn’t pass a carbon pollution reduction scheme and lacked the guts to go to an election on it seriously damaged him in the eyes of voters in 2010. In Hockey and Abbott’s case, the damage has already been long since self-inflicted. Rudd revealed himself to voters as just another politician rather than the leader they’d kidded themselves he actually was (and that he occasionally indicated he could be with the apology to stolen generations and his handling of the financial crisis), but voters already dislike Hockey and Abbott — indeed have always disliked Abbott.

But what it also does is corrode any potential trust among voters that politicians might actually be acting in the national interest rather than self-interest — and that fatally undermines a leader’s capacity to secure voter support for difficult reforms. Voters will accept pain if they believe it is being inflicted in the national interest — that’s why a politically wounded Julia Gillard got away with not one but two tax rises — a flood levy after the 2011 Queensland floods and Medicare levy rise to fund the National Disability Insurance Scheme. But it’s hard to achieve that if voters think you’re just acting in self-interest.

Not that Joe Hockey’s umpteenth re-announcement of his vague tax cut plans yesterday was a political success, either. He delivered his speech to the Tax Institute and Chartered Accountants Australia and New Zealand; afterward, the chief executive of Certified Practicing Accountants Australia ripped into him, mocking the Treasurer for “call[ing] busy people into a hotel room to tell them something they already knew … if it wasn’t so tragic, it would be funny”. He accused Hockey of “deferring and distracting” on tax reform, that Hockey “appears to be caught in a cycle of restating the problems rather than rethinking the solutions, while key issues are deferred and deferred and deferred”.

The best response was from Business Spectator’s Alan Kohler, who noted that bracket creep, notionally a scourge from which Hockey wants to save us, is actually straightforward and easy to fix — you just index tax thresholds, and it will never be a problem again. As Kohler correctly noted, however, that would deprive politicians of the opportunity to promise tax cuts to voters as election stunts.

Such cynicism and amorality, of course, are a long way from the “moral imperative” Hockey felt entitled to lecture the rest of us about last year.

“Bracket creep… is actually straightforward and easy to fix — you just index tax thresholds, and it will never be a problem again.”
Quite so. Perhaps someone can enlighten me as to why there isn’t constant and strong pressure (from non-politicians of course)to do it.

The ‘Lifters and Leaners’ seem to have vanished into the updraft of a Chopper as well!

The so-called “budget crises” was a very big thing for the Coalition. They had a lot of people across Australia convinced that the National Debt was something to worry about, otherwise their “grandchildren would forever be saddled with the debt”. Now if they cut taxes before they fix the problem (that they talked up), any ounce of credibility they may be hanging on to will be shredded. Hyberbole or not, we cannot allow them to walk away from their own narrative as if it never meant anything.

Remember when Joe still had the baton in his knapsack pre-peta and the bariatric band the only discernable loss is the baton..