Abbott, like Menzies, is a trigger-happy hound dog, baying for blood

Liberal Party leaders have a history of agitating for war. Why is that? 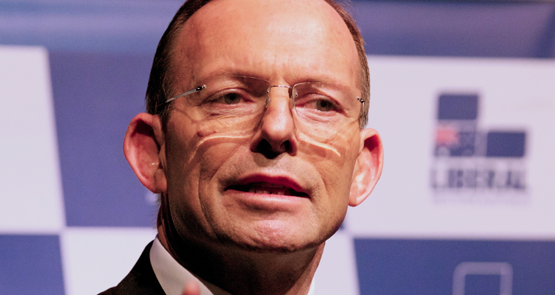 “I believe that the Abbott government has orchestrated the request from the United States to Australia on this issue [that is, the attack on Islamic State in Syria] … What happened was the Abbott government wanted this request. It’s spoken to the Americans and it’s got the request it needed. [I]t would be naive to think there’s not a domestic political side to this activity  … Have no doubt — Tony Abbott wants to use this issue to try to wedge the Labor Party in terms of domestic politics.”

In The Australian’s online video, editor-at-large Paul Kelly presents his monologue straight to camera in his customary Moses-descending-from-the-mountain manner, and so we’re left uncertain as to whether Mr Gravitas sees anything at all untoward in a prime minister whistling up some military strikes so as to discomfort his parliamentary opponents.

But the suggestion that Australian involvement was requested by the PM rather than the White House reinforces a claim AFR political editor Laura Tingle made nearly a fortnight ago. “‘[V]ery senior sources say that Defence has been telling the Prime Minister’s office to stop saying the Americans have been asking for help on this because it is not true,” she wrote.

There is, of course, a long history of Australian politicians begging (sometimes unwilling) major powers for invitations to wars. You can trace the tradition all the way back to 1885, in which, in response to the crisis in Sudan (“Khartoum fallen — into the hands of the people it belongs to,” exclaimed English socialist William Morris), the acting premier of NSW W.B. Dalley unilaterally cobbled together an infantry force and offered it, free of charge, to Britain (who seemed rather stunned by the gesture).

Vietnam provides a more recent illustration. It’s now clear that, rather than being dragged into that war, the Australian government feared being left out. In 1965, the Americans dithered about sending ground troops to Vietnam, and a negotiated settlement (which, of course, would have saved innumerable lives) seemed a real possibility. But Robert Menzies and his foreign minister Paul Hasluck were adamant the conflict should be escalated, with Hasluck explaining how he feared “above all the likelihood of slipping into negotiation by default”.  In February that year, the State Department spoke of being under “some pressure” from Menzies to formally request Australian involvement, while McGeorge Bundy, President Lyndon B. Johnson’s national security adviser, referred to Australia as “trigger happy”.

For his part, Menzies explained: “We would be prepared to put in a battalion and were looking for a way in and not a way out. With this approach, the psychological effect on the United States would be phenomenally valuable, including in Australia’s interests.”

Academics Lloyd Cox and Brendon O’Connor describe Australia as less lapdog than hound dog, with the government baying for war on the basis that the Vietnam conflict would bolster the alliance with the US, foster closer engagement in the Asia-Pacific region and “offer political advantage over the parliamentary opposition”.

The same considerations predominated during the US-led invasion of Iraq. For his “coalition of the willing”, George W. Bush corralled together a remarkably motley collection of nations (the Marshall Islands, Micronesia, Rwanda, Slovakia, etc) using the usual combination of carrots and sticks. Australia, however, needed no such inducements. John Howard spelled out the rationale for involvement:

He didn’t mention wedging the ALP. But then again, there was no need: the Iraq War was obviously framed by the War on Terror rhetoric, for which a succession of Labor leaders had found no answer.

Today, the fight against terrorism seems to be all Abbott has left.

In her piece, Tingle revealed that cabinet’s National Security Committee had been asking “for a list of national-security-related things that could be announced weekly between now and the election”. Well, why not? We now learn that the misdeeds of one teenager, held for months in an isolation cell over the so-called “Anzac Day plot”, include “conducting surveillance” on two police in a McDonald’s store and spitting at a divvy van. The seeming collapse of the original front-page story into something far more prosaic reminds us that “national-security-related-things” often evaporate under the slightest scrutiny, which is presumably why new ones must be released weekly.

Still, in these uncertain economic times, the flag manufacturers, at least, can be confident about business.

Crikey clarifier: should IS sympathisers be charged with treason?

The love khaki hate green diversion appears to have run its course with no shift in sentiment other than among those already converted.. not much point in over solidifying your base at the risk of alienating the middle ground..when you’ve had one hundred and sixty adverse polls and your chief spruiker is deeply unpopular maybe its time for a reboot..

The Vietnam aspect of this matter was exposed by Michael Sexton in 1981 in “War for the Asking”. Academics Cox and O’Connor don’t appear to acknowledge this.

Menzies also apparently lied to Parliament about a non-existent “request” from the South Vietnamese government for Australian troops – a request they were being leaned on to issue (and subsequently backdate if I remember the book correctly).

In light of this ‘analysis’ it might seem appropriate for believers to pray for students at Victoria University.

Is Abbott interested in governing the country or continuing his role as a sort of opposition leader??Because every decision and announcement seems to be all about having a go at Labour and/or the Greens and not about actual governing. Its pathetic and woeful.

Mr Abbott is only interested in two related things. Winning elections and power. The country and it people and wellbeing come a poor third