Who’s got your back? The Liberal candidate for Canning, Andrew Hastie, is a quick learner, and has already demonstrated a fine capacity to politicise national security. “In Afghanistan, I did not feel that the then-Labor government had our backs,” the former SAS soldier said on Saturday. On that basis, Hastie must be particularly uncomfortable around Tony Abbott. In October 2010, Abbott declined to accompany prime minister Julia Gillard to Afghanistan because he didn’t want to be “jetlagged” when he met Conservative Party officials in the United Kingdom. “I didn’t want to get here in an entirely jetlagged condition,” Abbott said from London when quizzed about why he hadn’t joined the prime minister in meeting our troops. Presumably Hastie feels Abbott had his back from Birmingham, where the Tories were holding a conference?

Andrew Nikolic puts up his dukes. And speaking of classy former soldiers in Liberal ranks, is there anyone, or anything, Tasmanian MP Andrew Nikolic doesn’t want to fight? Crikey has previously covered Nikolic’s obsession with attacking Iran, while his role on the Joint Committee on Intelligence and Security appears to be to badger anyone who doesn’t support ever-more draconian national security laws. But now Nikolic’s pugilism has reached new heights: on the weekend he was actually reported by the Hobart Mercury as offering to fight Bill Shorten, apparently because he’d been stung by Shorten’s suggestion he had a “glass jaw”. Funny thing is, Shorten is dead right, for once: Nikolic would have to be the most thin-skinned MP in government ranks and is known to contact the employers of people who have had the temerity to express views with which he disagrees. So sensitive is Nikolic that he lashed out at Crikey’s Bernard Keane on Twitter in the middle of a JCIS hearing into the citizenship laws. Punch on, Andy.

Just sayin’. Who got some face time with Rupert Murdoch while he was in Australia? According to Sharri Markson in Media Diary, Social Services Minister Scott Morrison got a romantic dinner with the media mogul, which sounds like a messed-up version of The Bachelor: 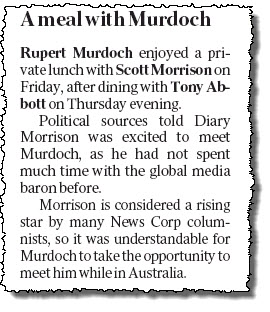 It reminds us of a quote attributed to former US President Lyndon B. Johnson, a piece of advice given to Henry Kissinger on his way out of the Oval Office:

“Read the columnists, and if they call a member of your staff thoughtful, dedicated, or any other friendly adjective, fire him immediately. He is your leaker.”

In recent Essential polling, just 6% of Liberal voters said they thought Morrison would make the best leader of the Liberal Party, compared to 21% who preferred Malcolm Turnbull — he doesn’t get any positive press in the Oz, though.

MWF fashion police. Spare a thought for the many speakers at the Melbourne Writers Festival on Saturday who weren’t Mark Latham. Without abusive Twitter accounts, defamation or swearing, they didn’t get half the attention the ex-Labor leader did. Knowing that this would be the case, Ms Tips headed along to see Gerard Henderson instead, as he sat in a much more civilised conversation with Geraldine Doogue (we’ve also been live-blogging a range of events here). It was, as the best events at such festivals should be, a very detailed discussion by two people who knew a lot about the topic at hand — B.A. Santamaria, and Hendo’s recently released biography of the man. We are disappointed to report that Hendo was not appropriately dressed for the occasion. There were no sandals, no Che Guevara T-shirt and no Che beret, as had previously been suggested in Media Watch Dog. Unfortunately alarms sounded and the theatre was evacuated (cause unknown, Ms Tips suspects an overload of B.A. Santamaria) before we got to audience questions, where the matter could be resolved.

A night with Mel. Actor Mel Gibson surprised movie-goers in Sydney last night, as they thought they saw him queuing up to see a film at the Israeli Film Festival in Sydney. It has since been reported that he pushed and abused a photographer from The Daily Telegraph outside the movie theatre, and the incident has been reported to the police. According to The Australian, Gibson was more likely to be attending another film on at the same time, but it was a shock for attendees to see him after his anti-Semitic rants made news all over the world. The film festival has made the most of the publicity, sending out this invite this morning: 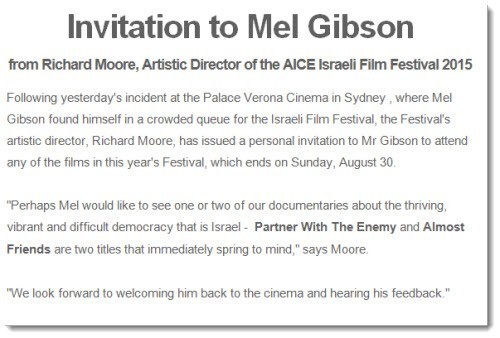 Lambie gets real with Microsoft Paint. Independent Senator Jacqui Lambie attempted to use a meme this morning to express her disapproval of the Shenhua Mine in the Liverpool Plains of New South Wales. We don’t know why it was necessary to use Comic Sans, or the little speech bubble, but it makes us wonder — if politicians can use their entitlements for expensive bookshelves and holidays, surely someone can help Lambie upgrade from Windows 98? 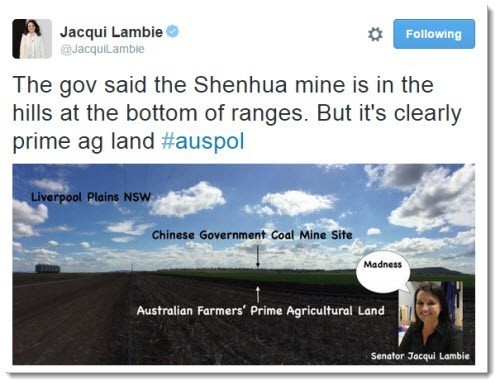 Tips and rumours: No debate on veterans’ entitlements

[“When you sup with the devil …..”?]
What did Rupert have when he was with Abbott and Morrison? “Toad in the Hole”?

Did mudorc tell the Abbottrocity to get his affairs in order now that he is yesteryear’s man?

This is piss weak Crikey.

Making a photo opportunity out to be that same as “having their backs” is pitiful. Just pitiful. Politicians turn up to be seen to be vote worthy. Kissing babies, visiting hospitals, attending funerals, visiting the troops.

Do you seriously think Gillard’s visit reinforced the notion that Labor “had their backs”?

Anyway, Abbott was actually in Afghanistan in October 2010. Not that anyone would know from this lame item.