Media briefs: it was the worst of lines … Latham, the journalist … women play footy, man gawps …

Pointless, pretentious throat-clearing. It is a truth universally acknowledged that the next columnist or critic who begins their piece with “It is a truth universally acknowledged …” is likely to be murdered. By me. The weapon will be a blunt instrument (The New Shorter Oxford English Dictionary) and my defence at the trial will rest on extreme provocation.

Appropriating the first line of Jane Austen’s Pride and Prejudice is the most irritating and over-used of the “Big Three” literary thefts so beloved of lazy hacks who can’t be bothered thinking up an original opening. The second is “It was the best of times, it was the worst of times” (Dickens, A Tale of Two Cities), and the third “The past is a foreign country: they do things differently there” (L.P. Hartley, The Go-Between).

The notion that stealing someone else’s great first line is somehow OK in a post-modern sort of way sticks in the craw of anyone who writes for a living (as distinct from salaried journalists or columnists on contract). If the next hit single by Beyonce began with the opening eight bars of Love Me Do she’d be sued into bankruptcy, and rightly so. Yet when the same level of larceny is in words, nobody seems to care.

Resort to this shop-worn lick has now descended to the lower backwaters of our journalistic swamp. The latest clever-clogs wordsmith to help himself to Jane Austen is Michael Idato, who writes preview pars about TV programs for Fairfax. “It is a truth universally acknowledged,” parrots Idato in Saturday’s Spectrum, “that any television viewer in want of entertainment will almost certainly be soothed by a cat.”

We are supposed to think this is witty. In fact it is little more than robbery in the service of such a hackneyed device that any reader who has graduated beyond the Dr Seuss books must surely groan.

Worse, it is meaningless padding. If we were to take Idato’s first sentence and delete all the words up to and including “that”, the sense would be unchanged.

Not even the legendary Phil Space, resident waffler at Private Eye, would peddle such vapid longueurs.

So, note to subeditors: cut the pretend-literary crap and let Austen, Dickens and Hartley rest in peace. — David Salter

Politicians as journalists … You wouldn’t know it, but Mark Latham was actually at the Melbourne Writers Festival to talk about whether politicians can make good journalistic commentators. He got to that, briefly, as the session drew to a close.

“The key thing when you recruit a politician to write is to get them to be independent,” Latham said.”The good thing about the Latham Diaries was that it burnt my ties. You got my real, independent opinion. I wasn’t waiting to be the next ambassador to Spain or whatever, they were my genuine views.

“The reason for ex-politicians to go into writing is that it can serve their constituency. They’re not someone in the press gallery, who wouldn’t know the public if it fell over them. They’ve actually been out there. There must be a role for people like that, who’ve left public life, to write.”

If you want the blow-by-blow, Crikey was live-blogging the session here. — Myriam Robin

Politicians as shock jocks? Mind you, if you’d rather skip the vitriol, we suggest you tune into Miranda Devine’s chat with Latham on 2GB from last night instead (he’s towards the end of the show). It was everything the writer’s festival would have wanted — polite, wide-ranging and coherent. It probably helped that Latham and Devine seemed to see eye-to-eye on so many things — the elites, the feminists and the inner-city journos who had a problem with crowds booing Adam Goodes.

Early on, Devine talked of the “frightbats” that had been trying for months to drive Latham out, using the term Tim Blair coined for a range of feminist commentators. Latham didn’t skip a beat. “I’m a shocking misogynist according to these frightbats”, he said, adding that it was a logical impossibility given he loves the women in his family. The rest of the chat, though, was civil — Latham put forward his point that identity politics wasn’t doing the cause of equality any good while not really smashing anyone in particular. The chat was pre-recorded before Latham’s MWF talk — suggesting perhaps that the 2GB producers were a bit cautious. Still, it’s probably a better explanation of Latham’s substantive point than you would have got sitting in at the writer’s festival. — Myriam Robin

Footy shorts on “girls” too much for some. South Australian footy legend and current Advertiser columnist Graham Cornes’ comments in a recent column about last Sunday’s AFL women’s match between Melbourne and the Western Bulldogs have drawn the ire of … well, most people with even a passing interest in gender equality.

Though the women’s game was a commercial and popular success — with a viewing audience larger than the previous day’s men’s AFL Essendon v Adelaide clash — Cornes chose to focus primarily on the appearance of the players. He felt something about these serious and talented athletes, competing at the upper most level of their sport, “just didn’t look right”.

“Perhaps it was the outfits. They wore boys’ footy jumpers and shorts. Not particularly flattering.”

“You could never say that about the Diamonds, our netballers who had just claimed the world championship,” he concluded.

In addition to his comments on the women’s uniforms, Cornes constantly referred to the players in question as “girls”, even though they were all at least 18 years old. He also seemed unusually fixated on the players’ breasts. Cornes worried about their comfort, stating that “chest marks do hurt”. Yes, good question: just how do these women manage to have breasts and do other things at the same time? Must be those legendary multi-tasking skills.

These comments — especially coming from a personality with such standing and respect both in the game and the media — have elicited a, shall we say, less than positive response by the wider community. Current professional sportswoman Hockeyroo Georgie Parker took to Twitter to voice her frustrations. “As a female who wants to works within the AFL, it is men like @Cornesy12 [Graham Cornes] that make me worry that my opinion won’t be valid due to my gender,” she said.

Parker was just one of many to voice her disapproval. Paul Bidmeade, a local South Australian football writer, went so far as to write an open letter in response to the article, suggesting the comments made were detrimental to Women’s AFL. Bidmeade suggested that it “not only insults the 195,000 females who play Aussie Rules, it could deter other girls from playing altogether.”

Women’s football site “Girls Play Footy” responded with an article, whilst refusing to link to Cornes’. “If you haven’t had the misfortune of reading it by now, you’re not missing out on anything,” they said. It appears women’s AFL has plenty of backers, with or without Cornes. — Crikey intern Marc Sudholz

Front page of the day. You can’t beat the zombie apocalypse … 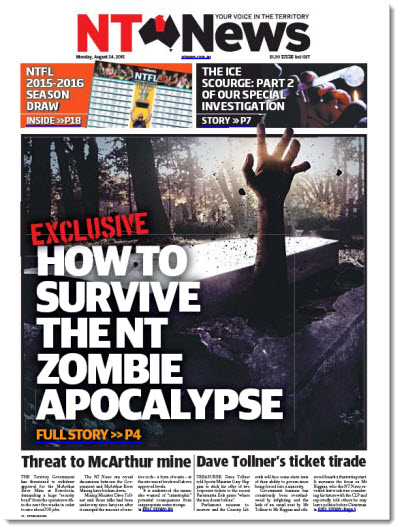 Another shocker Salter: ‘A (anything) for all seasons.

Also seen repeatedly: “Happy [families | political parties | … ] are all alike; every unhappy [] is unhappy in its own way.” First line of Anna Karenina.

Other favourites: rumours of X have been greatly exaggerated; the unbearable Xness of Y.