The Murdochs did a lot of damage to rugby league and the game will be better off by reducing their influence, going forward. 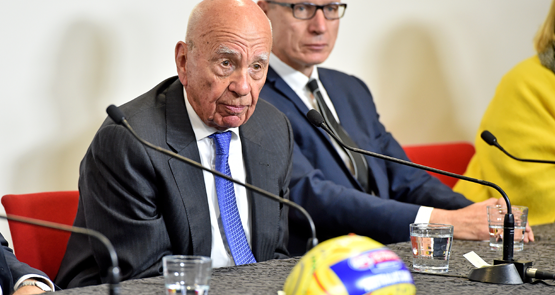 If Rupert Murdoch really does keep The Australian alive for its political and corporate power, in spite of the huge losses, then one of its KPIs should have been a decent Foxtel rights deal with the NRL.

Instead, as The Australian has been telling us almost every day for the past week, the NRL struck a new expanded free-to-air deal with the Nine Network and is happy to sort out the dregs with Fox Sports and Telstra at some future point.

James Packer privately tells people that his is the only family in the world that has taken on the Murdochs and won. That was over the Super League wars of the 1990s followed ultimately by the hugely profitable sale of James Packer’s interests in Foxtel and Fox Sports to News Corp in 2013.

Phone-hacking aside, Super League remains arguably the most audacious power-grab Rupert Murdoch ever launched, but it was costly, poorly executed and created some long-lasting wounds.

Long-term exclusive access to NRL games on Foxtel might have ultimately delivered payback on Super League, which is why the decision to sign an expanded long-term deal with Nine has triggered such anger in the Murdoch camp.

From a public perspective, most of that anger has been articulated through Lachlan Murdoch’s favourite mouthpiece, The Australian media writer Darren Davidson.

Here is a sample of what the English-born former advertising journalist has served up:

Extensive interview with incoming News Corp Australia CEO Peter Tonagh, who complains about losing two exclusive NRL games and foreshadows a change to the relative coverage of the AFL and NRL in print by claiming “we will be putting the weight of our newspapers behind the investment we have made [in AFL]”.

As usual, the Murdochs assume they can push their Foxtel partner around, although it is puzzling why Telstra would let a controversial company like News Corp speak on its behalf. There was also this line about the NRL clubs: “12 of them are seriously considering not signing their participation agreements, according to sources.”

And one of those, of course, would be the News Corp-controlled Brisbane Broncos — just another example of the conflict of interest in having media oligarchs as owners and operators of either individual clubs or entire sporting codes.

A fly-on-the-wall account of how the AFL deal was done, including tales of how Rupert Murdoch’s airport-bound car and Kerry Stokes’ plane were turned around due to a “deal breaker” on Friday, August 14. NRL boss David Smith’s triumphant press conference on his $925 million Nine agreement  was now described thus: “The Welsh-born former banker cut a lone figure as he trumpeted a deal that is now looking like a bust.”

Some very unsubtle threats from Davidson in these paragraphs under quote-free claims that Nine CEO David Gyngell tried to promote a multi-company group deal that did not exclude Telstra and News Corp:

“Fox Sports and Telstra have poured billions of dollars into the sport, standing firm with continued financial support even after the publication of a report two years ago into doping and links between sporting codes and organised crime. There are also suggestions the code is in breach of its own governance standards for failing to enter into due diligence by sending an official tender ­document.”

This final piece in today’s paper wraps up much of the earlier dummy spitting by News Corp but adds the new dimension of trying to bully Nine into surrendering its major win with the Saturday night game.

The bottom line is this: the Murdochs did a lot of damage to rugby league and the game will be better off by reducing their influence, going forward.

An expanded free-to-air deal is vital in a multi-channel environment where cord-cutting with pay TV is a growing global phenomenon.

And so what if Telstra is collateral damage? The company owns 50% of Foxtel and is almost as conflicted as the Murdochs, courtesy of being a broadcast partner and naming rights sponsor.

If Murdoch journalists want to put the commercial interests of a foreign billionaire ahead of NRL fans who have long been starved of quality games on free to air, well, good luck with that.

There is no way the Murdochs would have agreed to surrender two live games a week, so the only way forward for the high-powered NRL board was to do a secret deal with Nine, let the dummy spit unfold for a few weeks, and then extract the highest price available for the balance of the rights.

If that means going with ESPN, Stan, Google or Netflix, then more fool Rupert for not acting in a calm and commercial way.

Battering Labor governments into submission is a lot easier than beating up on NRL heroes, and if Rupert keeps up the threats through the likes of Darren Davidson, he can expect more than a few shoulder charges in return, bringing in phone-hacking, tax-dodging, undemocratic gerrymanders, bullying and all the other lamentable features he brings to the Australian media landscape.

And annual losses at The Australian will remain in the tens of millions of dollars, as its influence continues to wane.

“the Murdochs did a lot of damage to rugby league and the game will be better off by reducing their influence, going forward.” – The same could be said for Australia

Murdoch has the hide to accuse the ABC of being a taxpayer funded organ of the left whilst tax loss funding his own opinion via his Newscorpse operation and sundry offshoots like the IPA..the sooner his jawbone flatlines the better..

It’s quite funny reading the distorted reporting from the news ltd rags. League apparently about to fall over due to lack of interest from Murdochs!

Foxtels subscriptions in NSW and Qld would plummet if they don’t sign up to nrl. NRL are holding all the cards, and seem to have negotiated with Nine knowing that.

Foxtel will deal with the NRL, and ultimately to the NRL’s satisfaction, I would guess, or goodbye Foxtel.

For a Melb man Stephen you are spot on. As a South Sydney tragic I well remember the damage ‘Super League’ did to my club once the warring parties reconciled, thanks to Rupert trying to buy the code. Am not surprised with the daily dummy spits from News Corpse since the latest NRL TV deal was announced