Joe Hockey and the media are stuck in an endless, Groundhog Day-like repetition of the same story about tax cuts. And both seem to have forgotten we're deep in deficit, Bernard Keane and Glenn Dyer write. 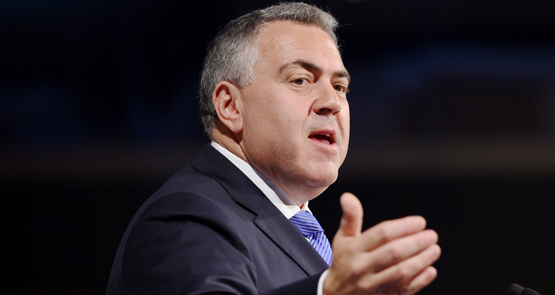 So in a major revelation today, we learnt that Treasurer Joe Hockey is keen for income tax cuts, intended to curb bracket creep, and that this would be a key part of the government’s re-election campaign.

Sound familiar? It’s just a fortnight since we noted that Hockey had announced that he was keen on income tax cuts to end the scourge of bracket creep and that they would form the basis of a tax reform package to take the next election — that he had said this repeatedly throughout the year, each time failing to provide any detail about how much, when and how they would be funded, each time being treated by the media as if he had made a major new announcement.

Well, it’s happened again. Hockey has said exactly the same thing over again, and both The Sydney Morning Herald and The Age and The Australian and The Australian Financial Review treated it as a major announcement worthy of front-page status. We’re in a lame fiscal version of Groundhog Day.

This is what passes for economic reform from the Abbott government — an apparently endless re-announcement that it wants tax cuts, but no detail about actually doing anything to achieve them. Perhaps Hockey should have saved it for the “national reform summit” on Wednesday, to give the talkfest the illusion of progress. Then again, maybe Joe can just turn up and re-announce the same thing yet again, confident it will be treated as new by the goldfish of the press, apparently unable to remember longer than five minutes ago. Won’t hurt with the Canning byelection either, right?

And more significantly, income tax cuts are a political tactic — not genuine reform. Genuine reform to improve the efficiency of the tax system so that it is the smallest handbrake on growth possible, in fact, has been ruled out. Reforms such as changing or ending negative gearing, the capital gains tax 50% discount for investment properties, higher taxes on superannuation, especially on high-income superannuants, and on trusts, and making a serious effort to curb multinational tax evasion rather than surrendering to it — they’re just some of the serious reform measures in the tax area that have been ruled out.

And then there’s the biggest problem for tax cuts of any time: how to pay for them. In case you’d forgotten, we’re running a budget deficit in excess of 2% of GDP this year and the forecast return to surplus in 2020 is based on a return to trend growth of 3% p.a. — which everyone, including the Reserve Bank, regards as more than a little fanciful.

So where does Hockey intend to get the money? He can slash spending to offset the cuts, which will mean a neutral fiscal impact, but he’ll have to hope consumers go out and spend their tax cuts, rather than save them, to avoid undermining economic growth. And as we’ve endlessly pointed out, Australian workers are in the middle of a wages pause that has seen real wages stagnating or even, in some quarters, shrinking. That means the bracket creep everyone is frothing about will take longer to become a problem, and the longer that takes to become a problem, the greater the downward pressure on budget revenues. Not even the higher employment growth of the past year or so will make up for the damage low wage growth (falling real wages) and low inflation will have on the revenue side of the budget. And don’t forget, Hockey wants to cut company taxes as well, and doesn’t want any revenue from a higher GST to go toward more state and territory government goods and services — it’s all got to be used to fund other tax cuts (another example of how this is a political tactic, not serious reform).

More likely, it seems, if the government ever actually delivers any income tax, they’ll be paid for by a higher deficit. Hockey as good as admitted that talking to ABC Brisbane this morning. Asked which was his higher priority, tax cuts or dealing with the deficit, he replied “both”. It was a staggering statement the significance of which doesn’t appear to have been appreciated yet. The Treasurer’s formal position is now that a return to surplus is no longer his highest fiscal priority.

Coming from the outfit that proclaimed a “budget emergency” and boasted it would have a surplus in its first year and then every year after that, it’s a remarkable reversal of one of the most fundamental elements of the Coalition’s economic reputation.

The budget emergency was the cudgel to beat the Labour party with to justify the LNP cuts to welfare, pensions and whatever they could get away with in the first Budget (thankfully the suffering public saw through that lie).
Now, we have the Canning bi-election and the usual old chestnuts are being thrown about, the Cap’n is away in the north (away from WA, but looking out to sea for another Tampa), and sadly they will probebly win the seat as the LNP are playing the patriotism card.

“Detail”? Isn’t that what you do to lambs at marking?

Instead of screwing us goldfish – why doesn’t he go after the barracudas?

The Coalition believe that they are so wedded to the “better economic manager” tag that they don’t even need to try anymore (similar to the situation under Howard). They may be right, given the current level of political discourse and media analysis.