Extending Australia's military involvement against Islamic State will reinforce the narrative of Islamist aggression and make us less safe. But the Abbott government can't help itself. 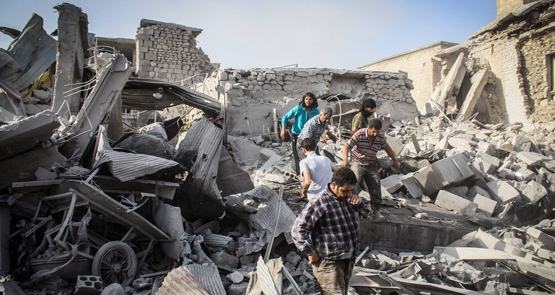 “There is a little difference between the legalities of air strikes on either side of the border,” Tony Abbott said on Friday about bombing Islamic State in Syria instead of in Iraq. “When they don’t respect the border, the question is: why should we?” In fact, there is a huge difference: bombing in Syria is illegal under international law, while it is entirely legal in Iraq. Australia simply has no basis in international law for bombing Islamic State in Syria. The two bases for such action — a UN mandate, or self-defence — don’t apply. There is no existing UN mandate for such action, and Australia is not engaged in self-defence against IS in Syria — except by the longest of bows, that IS urges militants in other countries to pick up knives and launch individual, low-scale attacks on their own communities.

Curiously, in his pre-emptive justification for bombing in Syria, Abbott is actually affirming a key IS narrative: it has deliberately obliterated the Syria-Iraq border as a symbol of Western intervention in the region, seeing it (correctly) as a fictional division to suit the interests of the French and the British (and the Tsarist Russians) during WWI. Now it is being erased, first by IS and now by the Western powers attacking it.

What about the morality of airstrikes targeting IS? While the US government has admitted just a handful of civilian casualties resulting from its bombing of IS targets in Syria, Syrian groups insist there have been scores and perhaps hundreds of civilian victims of US (the US carries out 85%-90% of airstrikes in Syria). Any Australian airstrikes in Syria are almost certain to cause civilian casualties — as Julie Bishop admitted yesterday, Western military forces are unable to precisely target their ordnance. And in the absence of a legal basis for airstrikes, that places Australian forces at risk of legal repercussions when they have killed civilians.

More to the point, targeting IS forces means that the party responsible for far more slaughter and misery than IS, the Assad regime, not merely will not be targeted but will actually benefit. The little available evidence of detailed body counts from the war in Syria, which has cost over 200,000 lives, suggests that the Assad regime, which commands air power and heavy artillery, has killed at least 10 times and perhaps 25 times more civilians than IS. The crucial difference is that IS, as part of its recruitment strategy, actively promotes its slaughter in both Syria and Iraq, whereas the Assad regime tries to keep its slaughter quiet, but there can be no question that, however sickened we might be by the savagery of IS, they are amateurs compared to the regime they are fighting against. And every Australian airstrike against IS in Syria is one less airstrike Assad’s air force has to carry out, freeing them up to bomb marketplaces, as they recently did in Douma, where they killed over 100 civilians — indeed, there were further airstrikes by Assad’s forces yesterday, inflicting dozens more fatalities.

Bombing IS not merely helps the Assad regime kill more of its own population, it perfectly reinforces the violent Islamist narrative that Western countries prefer to kill Muslims rather than help them. The first wave of foreign fighters that entered Syria in 2012 was generated by the atrocities Assad was engaged in against his own Muslim population, just as Muslim terrorists in London and Madrid were radicalised by the Western invasion of Iraq that led to over a hundred thousand Iraqi casualties, and just as the targeting of IS as an “existential” threat to the West — indeed, somehow, a threat greater than the prospect on Cold War nuclear annihilation — sparked a huge rush of Westerners to join its ranks, slipping across the border of Turkey with the acquiescence of that government. That’s why despite the bombing campaign against IS, it has been able to maintain its manpower, replacing battlefield losses with recruits. And that’s without the effect of the deaths of civilians in Western airstrikes, which infuriate and radicalise civilian populations who endure them.

Julie Bishop’s attempt to smear Labor Deputy Leader Tanya Plibersek as someone willing to provide a “picnic” for terrorists when she proposed more humanitarian assistance for Syrians simply further reinforces this IS narrative: the West brings only death and destruction to Muslims, not aid or help — and readily violates international law if necessary to do it, thus justifying similar contempt on the part of militant groups. Abbott’s argument that legal niceties like borders can be ignored can easily be used by terrorists as well.

All of this is relatively straightforward — the illegality, the monstrosity of the Assad regime even compared to IS, the way Western military intervention simply generates more terrorists and encourages recruitment for militant groups, a fact acknowledged by the most senior Western intelligence officials and experts. But Western governments, and most particularly the US, the UK and Australia, can’t help themselves. They are in a grisly alliance of interests with Islamist terrorists: our governments use terrorism to give themselves more power, bolster their domestic political position and spend more money on defence while groups like IS benefit from a steady flow of recruits radicalised by Western actions.

The Abbott government, however, is peculiarly blatant about its relentless politicisation of national security. It has made no secret of its desire to ramp up military intervention in Iraq — the Prime Minister even contemplated unilateral military there — while handing itself more power and trying to demonise the opposition no matter how doggedly Labor clings to the government on the issue.

With the ever-expanding number of Australian flags at each national security announcement, the genuinely weird hype about how IS is the greatest threat in the history of the world, the criticism of Muslim leaders for a fictional failure to say that Islam is a religion of peace, government MPs attending Islamophobic rallies and the constant assurances that the government will protect Australians from a threat it is itself exacerbating, the Abbott government is the id of Western neoconservatism, unfettered and unfiltered by any restraining urge, self-awareness or internal inconsistency. 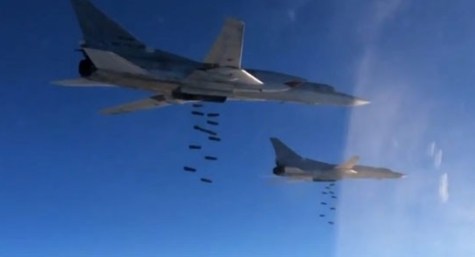 Rundle: same old murderous song and dance as we bomb IS again

All bombing is terrorism..

Assad the Savage Arab Dictator, eh Bernard? Straight out of the AIPAC playbook. BTW, Alawites are Muslim. You ought to read more than Greenwald.

“The Coalition of the Shilling – where foreign wars seem to be edited more for domestic politics.”?
[That “Terrorist Picnic” sound-bite (in reply to Plibersek’s query about more humanitarian aid than bombs) – that Lady Penelope – she’s a classless act isn’t she?]
Toady does need a couple of distractions from his domestic problems – “An ISIS over ice, thanks.”?

Both Bishop and Abbott made outrageous claims over the weekend. Abbott said that as terrorists don’t respect international borders neither are we obliged to do so. Bishop’s claim on Insiders was to the effect that as the borders are blurred because of the fighting there is no impediment to our bombing in Syria. This is literally mind blowing. We actually have two of the most senior Ministers advocating war crimes and breaches of international law. Australia is a party to a number of relevant international treaties. Are we now to assume that they have been repudiated just as we repudiated our obligations under the Refugee Convention?
The co-author of the legal opinion for the Howard government saying it was OK to invade Iraq is now the head of the A-G’s department. If this is an example of the quality of the legal advice the government is getting then we need to be very afraid.
IS, incidentally, is actually a creation of western intelligence agencies, as the DIA set out in documents released under FOI laws. But that is an issue worthy of examination in its own right.

I had been wondering where Canberra looked for a lead in Middle Eastern policy, but now I know: “When they don’t respect the border, the question is: why should we?”

IS is setting our foreign policy, so I guess that means they have already won. Thanks Tony, thanks Julie.