The ACTU, CFMEU and AWU have begun making their case for Dyson Heydon to be removed from presiding over what they say is a politically motivated commission. 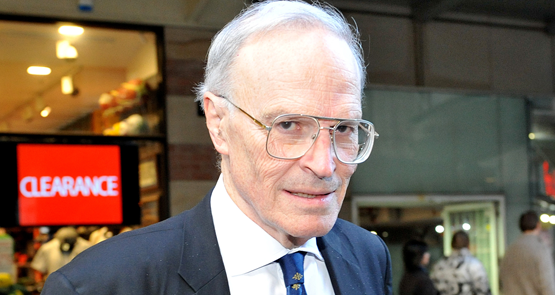 Three of Australia’s leading unions have argued their case that commissioner Dyson Heydon must remove himself from the Royal Commission into Trade Union Governance and Corruption over allegations of bias against the Australian Labor Party. And one union has made the startling accusation that some of the documents related to the case might have been doctored.

Heydon called a hearing of the commission this morning to hear applications from the ACTU, the CFMEU and the AWU for Heydon to recuse himself after Fairfax revealed he was due to speak at the Sir Garfield Barwick Liberal Party fundraiser in Sydney next week, while still heading up the commission.

Heydon pulled out shortly before Fairfax published news of the address, but emails released by the commission revealed the fundraiser had been planned for well over a year; Heydon only pulled out of the event this month. The former High Court judge has claimed he “overlooked” the fact that the event had an association to the Liberal Party, despite numerous references to the Liberal Party in several email exchanged between Heydon and the organiser of the event, Gregory Barton.

ACTU counsel Robert Newlinds this morning ran through the chronology of the emails, citing the email with a subject heading mentioning “Liberal Party of Australia” and with the attachment with a Liberal Party logo, and disclosures about donations, as “clear enough for a reasonable bystander” to have understood it to be a Liberal Party event, and a fundraiser.

“The hypothetical observer would naturally assume you would read the email … and you would pick up those facts, not necessarily going to the attachments but the email itself and the title,” Newlinds told Heydon.

On the claim that Heydon merely overlooked mentions of the Liberal Party for the event invite, Newlinds said the ordinary observer would assume that Heydon, having being appointed to the High Court, would be a brilliant lawyer with the ability to absorb and retain information.

In the ACTU’s written submission Newlinds argues that had the commission not been “politically charged” in targeting sitting and former Labor members, it might have been possible for Heydon to speak at a political event, but the commissioner cannot be divorced from the political nature of the commission itself. Newlinds pointed to Heydon’s statement pulling out of the address, in which Heydon told Barton he could not speak “at least while he is the royal commissioner”. Newlinds said that statement “seriously compounded” the matter because it made it clear it was a political event Heydon otherwise would be willing to attend.

“Mr Burton, subject to his problems with grammar, has gone out of his way to make it clear, over and over, it was a Liberal Party event,” Newlinds said today.

“The work of this commission has been embraced by the Liberal Party in government. It is said to be proud it has established this royal commission,” he said.

“There is no part of the inquiry that would not be affected by a finding of apprehended bias.”

Agius suggested that a missing state donations compliance document from the the invite email from August, initially released by the commission indicated that some of the documents could have been doctored.

The CFMEU discovered this after the commission forwarded digital versions of the emails to the CFMEU, and not just the redacted PDF printouts that had been released publicly.

Newlinds did not agree with Agius that the documents could have been doctored, but expressed his frustration that all documents were not initially provided on Monday.

“Boy, you’ve got to be confident when you tell someone they’ve got all the documents … and you were wrong on that,” Newlinds told Haydon.

Counsel assisting the commission, Jeremy Stoljar, told the committee that it was an oversight that the electronic version of the emails were not provided to the AWU or the ACTU at the same time as the CFMEU, but rejected the CFMEU’s assertions that the emails could be doctored.

The AWU said that justice would not be seen to be done if Heydon continues as commissioner.

Heydon adjourned the hearing on Friday to consider the “interesting and complex matter” and said he intended to make a decision by Tuesday, but indicated it could take longer than that.

Federal Labor politicians have put off a Senate motion calling on Governor General Sir Peter Cosgrove to dismiss Heydon until early September to give the commissioner time to make a decision about his position.

Did he or didn’t he? Heydon plays hard to get with unions, with hearing delayed again

Surely the primary job of anyone presiding over a sham
Royal Commission is to at least pretend to be non-partisan for the full duration of the relevant proceedings?
I mean, seriously, how hard can that be…??

How about Tim Carmody to replace Haydon?

Sorry Ian, he’s busy not being the Chief Justice of the Supreme Court of Queensland

The real question is what didn’t Heydon know, and when didn’t he know it?