Warren Entsch feels the love. A tipster tells us that LNProud, a group of LGBTI people who support the Liberal and National parties, are holding a fundraiser for Liberal MP Warren Entsch in Sydney next week, which will be attended by Entsch, Malcolm Turnbull and Christine Forster (Tony Abbott’s sister). According to the tipster, the fundraiser is necessary because Entsch is on the outs with party HQ:

“So why are a bunch of Sydney queens fundraising for a Queensland MP? Apparently head office are so pissed with Entsch for pushing the gay marriage barrow, they’ve told him he’s on his own when it comes to campaign funds come the general election. He won’t get a sniff from them. Once again the high homophobes in the coalition are prepared to lose a seat rather than be seen to be supporting the gays.”

What’s your job now? Speaking with 3AW’s Neil Mitchell this morning, Social Services Minister Scott Morrison said he wouldn’t take action against government employees who had been found to have accounts on infidelity website Ashley Madison. Asked if he would take action against anyone using a .gov.au email address on the site, he said it wasn’t his job to be a policeman on people’s private lives. Except when it comes to allowing same-sex couples to get married — then it’s definitely his job.

Sex Party pulls out. Following our report yesterday that Australian Sex Party federal director Douglas Leitch was due to attend a meet-up of the Melbourne Gamergate community next weekend, the Sex Party released a statement saying that Leitch would practise his withdrawal method:

“In early August Fiona Patten MLC was invited to attend a local meeting of gamers. When a scheduling conflict arose Douglas Leitch, Federal Director of the Australian Sex Party, agreed to attend in her stead.

“When alerted to the nature of the meeting through a reddit post Mr Leitch withdrew his acceptance of the invitation.

“The Australian Sex Party opposes harassment and bullying in any form.”

We find it hard to believe that political groups don’t do basic searches on the groups they agree to meet with, but maybe that is asking too much.

Talk wordy to me. The latte-sippers of Melbourne will be descending on the Melbourne Writers Festival over the next 10 days, and for all the gossip, you can follow Crikey‘s team as they live-blog their way through the festival. We are particularly looking forward to Gerard Henderson’s sandalista outfit, which has been promised for months in Media Watch Dog.

Campbell Newman. It was announced yesterday that Queensland Police Minister Jo-Ann Miller would be donating the former state government’s bright pink prison jumpsuits (which the Newman government wanted to make bikies wear in prison) to the state library and Queensland museum, as well as to two breast cancer charities. The minister said the government has been overhwelmed with enquiries for people who wanted to own a pink jumpsuit, probably as some kind of weird souvenir of the Campbell Newman government. One such person looking for a set of suits is Eric Gardiner, the writer of Bounty, a play to premiere at Melbourne’s Fringe Festival that focuses solely on the Newman government. According to Gardiner, the play will be a dark satire, in which the characters of Campbell Newman, Lisa Newman — and their daughters, who will be wearing the suits. Gardiner told Crikey this morning that he hadn’t given up on his quest for the original suits, but that the theatre company probably can’t afford them. Even without the suits, the play promises an absurd level of detail on Newman, after hours of research, right down to the specific way the former premier scoops ice cream out of the punnet.

Luck’s a fortune. Australian National University copped plenty from those intemperates at The Australian Financial Review and The Australian last October for daring to sell out of seven energy and resources stocks Iluka Resources, Independence Group, Newcrest Mining, Sandfire Resources, Oil Search, Santos and Sirius Resources, but with today’s results at Santos, maybe ANU is laughing now? The AFR was very upset at the ANU’s stance (and ignored the fact that it was part of a trend by a growing number of investment funds in Australia and around the world to quit resources shares, especially those focused on fossil fuels and nuclear power. In particular the AFR attacked the Santos sale decision, calling it a disgrace and a threat to jobs. Will the AFR be very quiet after Santos this morning revealed an 82% drop in profit, announced the resignation of CEO David Knox, and talked about more job and investment cuts?

Free to a loving home? There’s always someone who needs to be the funny guy, and this anonymous Gumtree poster has hit the nail on the head. This advertisement for a “Cabinet — functioning exceptionally well”, appeared on the classified website yesterday, from a seller known only as “tony”. 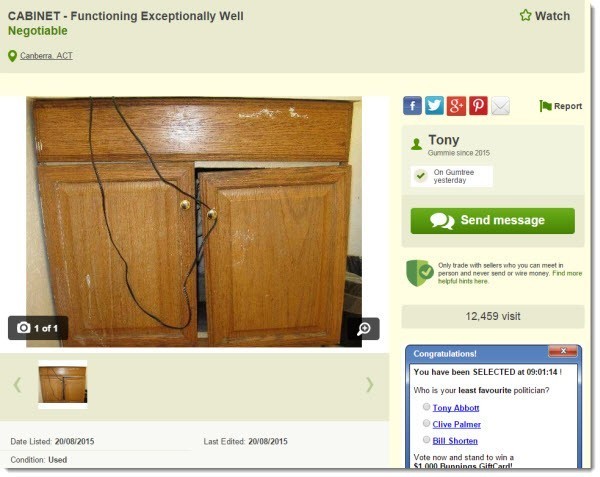 “As you can see from the picture, our cabinet is functioning exceptionally well. Pretty much ‘as-new’ condition. No damage whatsoever and no cracks beginning to show. Every part working exactly as it should be. No surprises. Keeps everything neat and tidy (the last cabinet we had was chaos!). Very modern looking. Also very sturdy — good at stopping things. Does leak from time to time. Comes with flag. Open to offers.”

Both Crikey and Junkee seem not to have worked out that that cabinet ad is the work of theshovel.com.au: http://www.theshovel.com.au/2015/08/20/cabinet-functioning-exceptionally-well/

Cabinet for Sale: Didn’t The Shovel do that? That’s where I first saw it

Can it be established whether MP allowances were directed to Ashley Madison?