‘Mitchell wants to shut down dissenting views’: Carlton defends Ford from the <em>Oz</em> 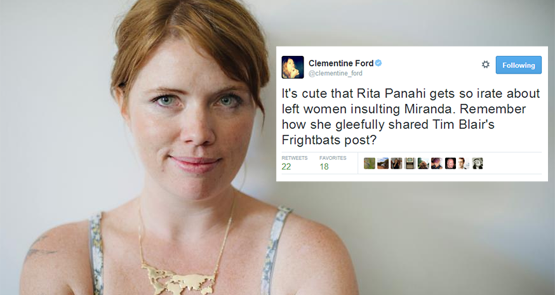 As a Twitter spat makes front-page news at The Australian, controversial commentator Mike Carlton has urged his former publisher to stand firm against a campaign to sack columnist Clementine Ford.

This time last year, Carlton quit his long-running column at Fairfax, after senior management urged him to take a break in the wake of sharp criticism. The Oz published emails showing that Carlton had been responding in personal emails abusing him with some abuse of his own, after he wrote about the contentious Israel-Palestine conflict.

Carlton, who has always had a rather robust Twitter presence, says The Australian editor Chris Mitchell has long sought to shut down dissenting views. Ford has been a frequent critic of News Corp in the past, named by Daily Telegraph columnist Tim Blair as one of the “frightbats” in his infamous frightbat poll of female and feminist authors. Today’s piece on her follows several days of criticism on the blogs of Tim Blair and Andrew Bolt about Ford’s tweets, which were, in turn, the subject of strong debate online, particularly between Ford and The Australian associate editor Chris Kenny. 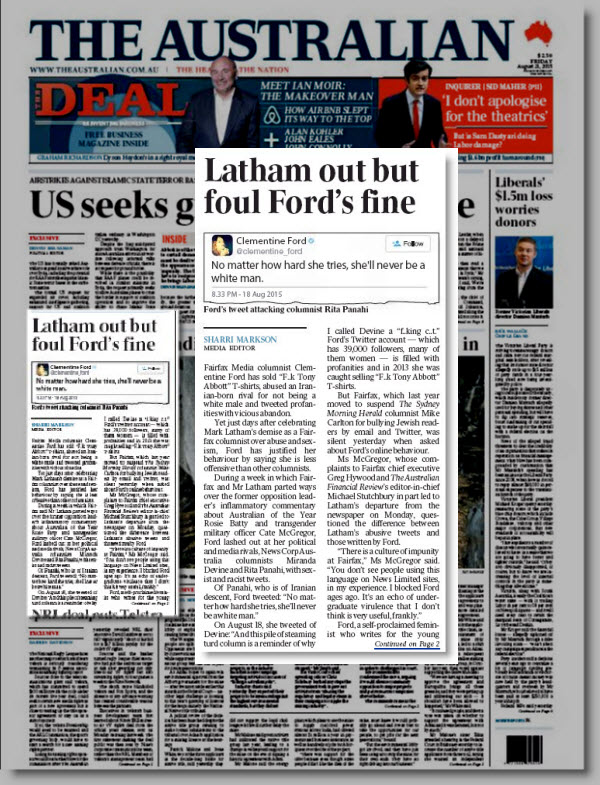 Ford, who was a columnist in Adelaide with News Corp’s Sunday Mail, tweeted in May 2014 that she remembered why she had called Miranda Devine a “fucking cunt” (which Bolt said revealed Ford’s “internalised misogyny”). The tweet, which appears to now be deleted, was in response to Devine penning a column on the rugby league entitled “NRL bosses are totally gay” (The post was not homophobic, as “gay” does not mean homosexual, Devine wrote, but “dumb or stupid”).

More recently, Ford tweeted about News Corp columnist Rita Panahi, saying: “No matter how hard she tries she’ll never be a white man”. Panahi was born in Iran. Ford’s tweet was a defence of Rachael Lonergan, whom Panahi has previously called a “frightbat”, referencing Blair’s poll (Lonergan deleted her original tweet, so the full context is no longer available — she has been defending Ford on Twitter this morning).

Earlier this week, Ford lauded the BuzzFeed investigation into abusive tweets from the Twitter account @RealMarkLatham, which led to Mark Latham resigning from his eight-year column with The Australian Financial Review. The Oz’s article argues Ford’s own tweets are also offensive to women.

Speaking to Crikey today, Carlton said it was unfortunate News Corp seems to be campaigning to shut down dissenting views.

“I find a vast number of Miranda Devine’s opinions barking mad — but I don’t want her to lose her job,” Carlton said. Asked if he thought journalists had a responsibility to act with a professional objectivity on social media, he said, “not particularly, no”.

“Mitchell clearly wants to shut down dissenting views, views he doesn’t like, on opposition news media — the ABC or Fairfax, or Crikey. But if we’re all going to curl up into a little ball because The Australian will say something nasty, the game is lost.”

Fairfax’s social media policy prevents employees from using social media in a way that would reflect badly on themselves and Fairfax. The policy is vague, giving managers a lot of leeway in enforcement, but it is enforced: Crikey has heard of several Fairfax employees who have been counselled against using social media to bait rival journalists, particularly where those competitors are employed by News Corp.

Curiously, Lieutenant Colonel Catherine McGregor, who helped reveal Latham’s Twitter abuse and is quoted in the Oz’s piece, appeared to distance herself from the story this morning, tweeting:

Fairfax turns on Carlton as we increasingly shoot the messenger

The evidence is mounting on how much dumber we appear since the advent of Twitter.

Why has Crikey written an article in defence of these foul abusive tweets?
I am not defending Latham but if you read them their is no significant difference in most of it. (of course some will argue that, but the abuse side is the same)
Why must poor little Clem be protected, there is no shortage of feminist commentators doing the rounds. Why shouldn’t she be judged by her own words and actions as others have been?

@zut alors – how right you are.

Clem Ford might be nothing more than anti-male click-bait for Fairfax but abusing someone from behind the safety of a keyboard is pretty weak. The best way to deal with intellectual lightweights like Clem or Miranda is to ignore them. Given that both of them only preach to the converted there is no loss on either side.