New Matilda says goodbye to all that. And other media tidbits of the day.

The revelation, made as part of a regular subscriber drive, marks a bit of clean air for the website, which has sparred with private colleges, former University of Sydney professor Barry Spurr and others. In recent months, New Matilda has broken a string of big stories, but these stories have often triggered legal action against the publication.

Editor Chris Graham thanked the websites’ lawyers for this recent good news, “in particular our pro-bono guru of all things legal, Geoff Holland. To give you an idea of just how good a lawyer Geoff is, we had bugger-all money to start with, then we got sued from what-not to breakfast time … and yet, we’re still here!” — Myriam Robin

Hun turns crafty. The Herald Sun today told readers that six-month subscribers will get a tonne of craft beer sent to them for free. Maybe VB should be worried … 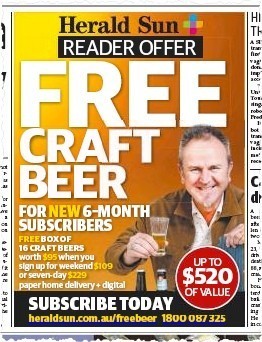 Dead trees dead. Despite the recent sales of the Financial Times and 50% of The Economist, it’s a bear market for newspaper sales — especially in the US. While The Washington Post was sold to Jeff Bezos of Amazon for $250 million two years ago this month, many smaller papers are being traded (with local monopolies, as buyers follow the likes of Warren Buffett’s Berkshire Hathaway into specific one-paper markets in the US hinterland). But big city papers are proving hard to sell. Several have been traded in Southern California this year, but that represented asset reshuffles after one sale of a newspaper group fell over.

Now comes the news that after months of trying, the New York Daily News has proven to be unsaleable since being put up for sale in February of this year. Owner Mort Zuckerman (a US property developer) told staff overnight, in a memo leaked to news agencies, that he had “decided to withdraw the Daily News from the market”. Reportedly he had wanted US$200 million for the paper, but the bid fell far short. Reuters reported at one stage that Cablevision, owned by the Dolan family (also the owners of Newsday, based on Long Island) had offered US$1 because of the high level of debt in the Daily News. Zuckerman, who also owns U.S. News & World Report, is executive chairman of Boston Properties, one of the largest office developers in the US, so he has deep pockets. The Daily News used to sell 2 million copies a day in the late 1940s. The latest figures show it had combined print and digital sales Monday to Friday of 307,000 in the first half of this year. — Glenn Dyer

Sun still not shining in the UK. Of all the 120 newspapers in the Murdoch clan empire, the one that has given the company the most trouble has been The Sun in the UK. While it might still be a bit of a news-breaker, and remains the best-selling UK paper, its’ something of a black hole as ad revenues disappear and the company’s digital offerings remain weak and unfocused (according to News Corp management). In fact, much of the US$82 million drop in UK ad revenues for News came at The Sun. In the recent post-results briefing, News CEO Robert Thomson said steps were being taken to stop the rot and improve the paper’s digital offering. Part of that was to water down the strict paywall around The Sun’s website from June (compared to the other UK and Australian papers). Overnight The Sun released its first website traffic data for two years — and the news was not encouraging for the Murdoch clan and its management.

The Sun was least visited of the major UK newspapers with the latest online figures from the Audit Bureau of Circulations showing The Sun attracted an average 792,994 unique browsers each day in July. That is well behind the Mail Online, which remains the most read news website, with more than 14 million unique browsers, up 4.7% on June. The Guardian had its average daily audience rise by just over 3% to more than 8 million. The Telegraph attracted more than 4.5 million browsers a day. The Sun’s figures show the damage a high paywall does to newspapers online attraction. In July 2013, just before the full strength paywall was erected, it reached an average of 1.9 million readers a day. Now it’s just over 792,000. By the way, the bureau’s figures are based on individual devices (rather than people) accessing websites on any given day. So one person could log on via a laptop and then, later in the day, via a smartphone or tablet. — Glenn Dyer 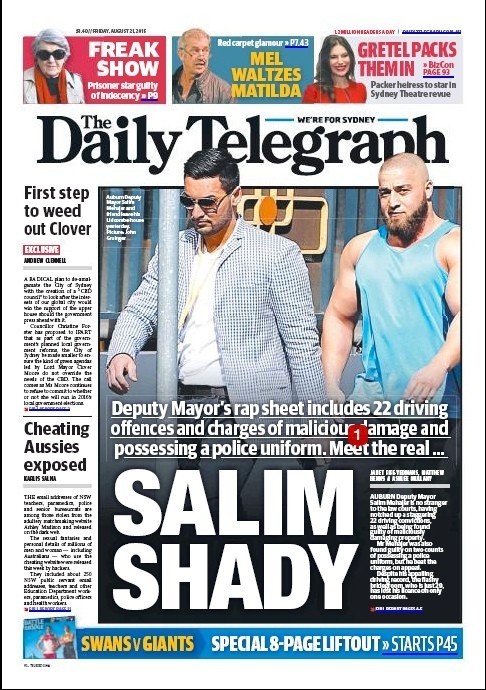 That story First step to weed out Clover is very interesting. The move to oust the most popular mayor in the state is being initiated by guess who? Toned Abs’ sister Christine Forster. And she wouldn’t have any interest in getting rid of the council would she?

Apparently it’s to cut off Clover Moore’s wicked green agenda. Wonder whether Rupert Murdoch fell of a bike when he was a kid? Nothing else could explain his rag’s hatred of them.

Reckon there’d be rioting on the streets of Sydney if this absurd plan went ahead.