The government's only economic agenda is around free-trade agreements and coal, which it supports with the zeal of a religious convert. 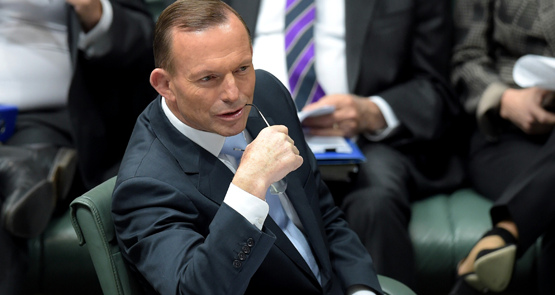 In normal circumstances, this week would have been considered a disaster for any government. There were four cabinet leaks, a Liberal branch lost a couple of million dollars, and the government received a formal rebuke from the Federal Court about the way it had represented a court decision.

Compared to last week, though, this actually made for an improvement.

The government furiously tried to reboot itself this week, albeit with a rather oxymoronical pitch: Labor was too enamoured of protecting the environment to provide jobs for Australians, while its opposition to the importation of Chinese workers at the expense of Australian jobs was racist — and racist in a way that, say, Barnaby Joyce’s opposition to Chinese investment in agriculture isn’t. Clear?

And that, in effect, is the entire “jobs and growth” agenda of the government — gutting the Environment Protection and Biodiversity Conservation Act and insisting that “free trade agreements” will be, contrary to the views of the Productivity Commission, a major driver of economic growth rather than a catalyst for a bit of market-shifting by exporters and no more. Joe Hockey keeps talking about tax reform, but the only tax “reform” on the horizon is a tax hike — the party of small government will extend GST to online purchases in an effort to deter consumers from buying their goods and services from local oligopolies.

All other reform processes are halted. We still haven’t seen the government’s response to the Murray Inquiry, or Harper competition review. Cabinet meetings are being cancelled because there’s nothing to consider, parliamentary debates are being strung out because there’s no non-controversial legislation to bring forward. The government’s agenda is as invisible as the precious “clean air” needed to promote it.

And gutting the EPBC isn’t entirely an economic agenda item, either; it’s part of Tony Abbott’s culture war. The Prime Minister is ideologically wedded to coal, and he has turned it into another front of the culture war, transforming a black lump of carbon into a totem of his version of how the world should work. To embrace coal is to reject climate change, to reject anti-growth environmentalism (because, in such a world view, jobs and the environment must be mutually exclusive), to celebrate the values of ordinary Australians who dig coal for a living (even if the government would prefer they were paid less) and the rest of us who get our electricity from God’s blessing to Australia of cheap, abundant coal. Even more, it’s a blessing Australia can share with the rest of the world, giving the poor and the hungry across the globe access to our resources so they, too, can enjoy coal-fired power.

Only this weird totemisation of coal can explain Abbott’s obsession with it. According to the Australian Bureau of Statistics, the coal industry employs just 39,000 Australians, around 17% of total mining employment, down from around 58,000 in November 2013, shortly after Abbott was elected. Coal companies have been trying to offload existing Australian coal mines for two years now; major coal companies are announcing losses or massive profit write-downs — Peabody Energy announced a billion-dollar loss in July and its share price is at historic lows; noted tax-avoider Glencore this week reported a loss. This is an industry in secular decline in Australia and around the world, where existing coal mines have been shuttered and lie idle, while Abbott insists he needs to make the world safe for new, high-cost coal mines.

It’s beyond economics and even beyond politics; it’s a kind of religious fervour that makes believers see not a lump of dark carbon but a glittering prize that will lead the world to prosperity.

John Howard always enjoyed a good culture war, and he was adept at initiating them while studiously remaining on the side of mainstream voters. Abbott lacks Howard’s restraining sense of staying close to voters, and the latter’s understanding that they were tools to a political end. For Abbott, the culture war is an end in itself, a raison d’etre, his defining purpose. Judging by the government’s current “agenda”, he has no other purpose. 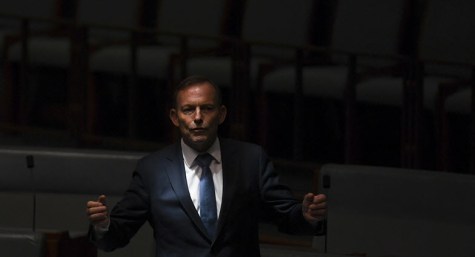 That reminds me. Whatever happened to the original Mohammed Saeed al-Sahhaf?

The only agenda I can see is about attacking Labour. Every question time, every policy etc etc always includes an attack on Labour and/or the Greens.
Maybe its time to try rising above it all and actually governing – you know, making decisions, introducing policies, having a discussion?

The enemy of the greenhouse is not coal, it is carbon. Even the conservative IPCC advises that it is our carbon emissions that must halve every 15 years to the end of the century. Contrarily, the ALP is willing to increase our consumption of gas in order to power the grid while their “50% renewables” decorate the hillsides.

Seems that way doesn’t it?

Waleed Aly did a great bit in SMH today (along with a cracking cartoon from Simon Letch) where those that would protect the future are the new communists. And indeed the Mccarthyism shown at the Senate inquiry into green group’s tax-extempt status bears that out.

Will Abbott ever have a come-to-Jesus-moment? More likely it’ll just more excoriating from the pulpit.

The only rational explanation for Abbott’s stance on coal (and related issues) is that he and/or the Liberal Party have been bought by the mining industry through substantial donations that they dread will dry up if the government loses its evangelical fervour in favour of their products.