Dutton a no-show. The Migration and Settlement Awards were held in Canberra on Tuesday night, but a tipster tells us that Immigration Minister Peter Dutton was “noticeably absent”:

“In attendance were the Prime Minister, Bill Shorten, ex-Minister for Immigration and Border Protection Scott Morrison and Assistant Minister for Immigration and Border Protection Michaelia Cash. He was instead having dinner with 3 others at Portia’s Place Chinese Restaurant in Kingston. Does this mean that the Minister would like to be seen to talk tough on border protection but not involved in celebrating those who’ve had a positive impact of migration and multiculturalism?”

We also hear that Concetta Fierravanti-Wells was in attendance in her role as parliamentary secretary to the Social Services Minister and Attorney-General, and another tipster tells us she was ticked off that she wasn’t invited to speak on the night (she was last year), and was placated when Morrison invited her up on stage during his own speech. We called Dutton’s office this morning, but didn’t hear back by deadline.

Gamergate meet-up gets sexy. Two weeks ago we reported that the Melbourne chapter of Gamergate, the group that began in August last year in response to women raising concerns about sexism in video game culture, would be having a meet-up at the end of this month, promising the attendance of a Victorian politician. The group says its main focus is to call out ethical standards in video game journalism, but its members have also been accused of harassing high-profile women such as Anita Sarkeesian and Zoe Quinn. Now the group has revealed which politicians they are courting and who is due to attend their meet-up in a Melbourne pub next weekend. The Reddit post about the event reads:

“#GGinMelb is excited to announce that the Federal Director of the Australian Sex Party, Douglas Leitch will be attending the #GGinMelb between 1pm and 2pm to meet with #Gamergate membership and have a chat about ethics, and the issues facing gamers in Australia.

“Fiona Pattern [sic], the current sitting member in the upper chamber of the Victorian State Senate, was unable to attend due to being out of the city that day for another event.”

Leitch ran for the Sex Party in the seat of Gippsland in 2013, getting 2% of the vote, and was made federal director this year. This is the invite, if any Crikey readers feel like they don’t know enough about ethics in video game journalism:

Of course, being Gamergate, that’s not just any woman to illustrate their invite. The character is Vivian James — a creation of anti-feminist gamers on 4chan, and her green-and-purple outfit is a reference to an explicit meme about rape (link NSFW — or life really). We called both Fiona Patten and Douglas Leitch this morning to ask their position on the group, but didn’t hear back by deadline.

Where’s Greg Hunt? That’s the question one tipster asked as the Prime Minister has spent this week  telling Australians that green groups are waging “lawfare” against resources projects and jobs. While most would think this would be an issue for the Environment Minister to comment on, it hasn’t been so. Hunt has been in Papua New Guinea, announcing Australian government initiatives on pursuing a World Heritage Listing for the Kokoda Track and rainforest conservation. We wonder what he’ll have to say now he’s back in Parliament. 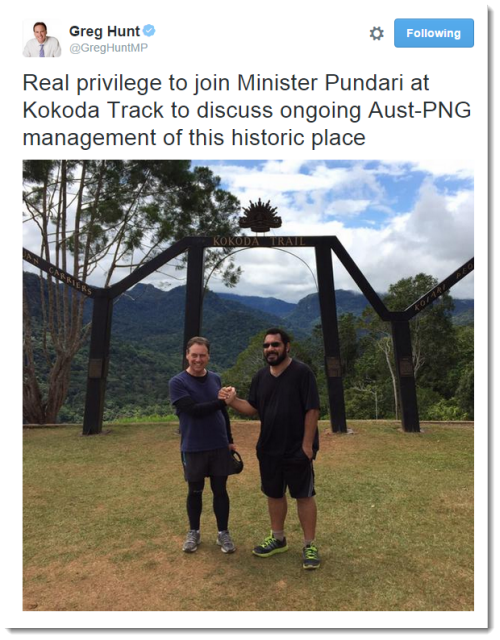 Project Pursuit nears launch. What’s Rupert Murdoch’s former key Melbourne lieutenant Phil Gardner been doing at Melbourne University? When we asked last month we were told he was mainly working on lit mag Meanjin. But several university insiders were sceptical, saying work was well advanced on a “secret project” the university was launching. Crikey now understands “Project Pursuit” will launch in September. Pursuit isn’t likely to be the name of the publication, but hey, it’s not much of a secret project without a code name. The publication will try to parlay the university’s research output into the broader public sphere. Watch this space.

Career after politics? Foreign Minister Julie Bishop is one of the few metaphorical goal kickers in the government, and she showed off her skills yesterday at the National Press Club, where she put not one, but three questions to AFL chief Gillon McLachlan. After pressuring McLachlan to predict when the AFL grand final would be played in Perth (2039, according to McLachlan), she asked how the league was looking after its base, and whether the league was looking at changing the rules to penalise players who kick backwards, holding up the game and raising the blood pressure of frustrated fans. McLachlan brushed off the question, telling her to ask AFL chairman Mike Fitzpatrick. Ms Tips wonders if JBish is also wishing her captain Tony Abbott would stop kicking the ball backwards — he wore a GWS scarf to last night’s Parliamentary Friends of the AFL event, so he doesn’t really know how to pick a winning side.

Show us your Post-Its. We’ve had freedom of information laws under the microscope this week, after reports that senior public servants were using Post It notes to give ministers advice in an attempt to get around FOI laws, but a tipster tells us the sticky squares aren’t exempt in Victoria: “Re the claim that public servants are using sticky/post-it-notes to avoid FOI laws. I can assure you that in Victoria at least, sticky notes are FOI-able, something drummed into all new public servants.” Maybe that plan isn’t so foolproof after all.

Halal inquiry starts hearings. Tomorrow marks the first public hearings of the Inquiry into Third Party Certification of Food (otherwise known as Cory Bernardi’s halal inquiry) will be held tomorrow in Canberra, but following on from the 1300 submissions made, the line-up looks quite disappointing. It looks like the witch who was “devastated” that meat she had bought to offer to her goddess had “been slaughtered according to the rituals of an Abrahamic religion” didn’t get an invite to the hearing, or the submission that used purple Comic Sans font to express opposition to the “death cult”. Instead, the committee will hear from the Australian Food and Grocery Council, Kosher Australia and Australian Organic Limited, among others. That sounds way too sensible to be interesting.

Nice to see GHunt in fetching black tights (pity they’re not fishnet a’la Lord Bunter the Downer) but unfortunate that the sign above them uses the amerikanism Kokoda ‘Trail.
Sigh.

Homer No-show : Do they have D’oh-nuts at Portia’s Place?