Who's writing for free on The Huffington Post? And other media tidbits of the day.

Before she started editing the AWW, McCabe spent 12 years at News Corp, where she worked at The Daily Telegraph and The Australian, and spent a period as a foreign correspondent in London. She’d never worked in magazines when she took over the AWW in 2009, but since then has been hailed by competitors as bringing a keen interest in current affairs and news to the 82-year-old title (Crikey’s Power Index crowned her the ninth most powerful person in media in 2012).

In the announcement this morning, ABC managing director Mark Scott said McCabe had had an “outstanding career across the media, as a political journalist for television and newspapers, as a foreign correspondent and as a very successful editor. Under her guidance, the Australian Women’s Weekly has become a compulsory read for its gripping stories about the lives of Australians, let alone those fantastic recipes for chocolate ganache.

“There are important lessons for the entire industry in how as editor-in-chief she has reinvented that great icon of Australian publishing. I’m looking forward to her delivery of the Andrew Olle lecture and the insights about our industry she will share with us.”

McCabe will be the third woman in a row to deliver the lecture, after Lisa Wilkinson in 2013 and Kate McClymont last year. The lecture is delivered annually in honour of ABC Radio broadcaster Andrew Olle, who died in 1995 of a brain tumour — funds raised from the lecture go towards medical research into the condition. — Myriam Robin

Who writes on HuffPo anyway? The Huffington Post doesn’t ask journalists to write for free, editor Tory Maguire has said, because the people it publishes on its unpaid “blogs” platform aren’t journalists.

“The blog platform is not for journalists,” she told Mumbrella. “We’re not going out and asking people to work for us for free, we’re inviting anyone who has something they would like to share with other Australians to use our platform if they so chose.”

So who does chose to write for free on HuffPo‘s blog platform?

Between its Tuesday morning launch and yesterday afternoon, Huffington Post Australia‘s blogs site had published 20 pieces. Four of these pieces were by people in some way employed by the Huffington Post. Another two pieces are by people who can be described as journalists but who are not on The Huffington Post‘s payroll. Three pieces were by politicians, writing about the policy of their choice, and two pieces were republications from personal blogs. Most of the other pieces were by people who use the media in various ways to promote themselves or their businesses. For example, Emma Watson, the “yellow Wiggle”, is on tour soon. Paul Mercurio has a new cookbook out. Sofie Laguna will appear in a few days at the Melbourne Writers Festival. Gabi Hollows is the cofounder of a charity, the Fred Hollows foundation.

The exception was, perhaps, a piece by Jeff O’Halloran, writing about Sydney house prices, who describes himself only as “a Sydney-sider pissed off about property prices”. He doesn’t appear to be a professional writer or media professional and didn’t have an online profile Crikey could find — perhaps his post is thus a good example of someone using the platform to share a view in the manner they choose.

Two of the 20 pieces were written by people who could presumably quite easily be paid for their work should they choose. Cassie White, who wrote about work-life balance, describes herself as a “personal trainer, yoga coach and health journalist” — her website shows she’s been published in a range of women’s magazines and websites, as well as on the ABC. Meanwhile Nasya Bahfen is a former ABC journalist, and currently a senior journalism lecturer at Monash University. She’s also an AFL multicultural ambassador. (Multiculturalism in the AFL was the topic of her piece.)

Asked why she’d chosen to write for The Huffington Post for free, Bahfen told Crikey this morning that as someone who is primarily an academic now, The Huffington Post‘s model was one she was familiar with — like, for example, at The Conversation, which doesn’t pay academics but publishes them under a creative commons license. The Huffington Post also allows republication of things published on its blog, with the writer retaining copyright.

“The pieces I’ve done for the Conversation get mileage when they are picked up — mine have been republished by SBS, the Straits Times and the Jakarta Globe for example,” Bahfen said. “I am also in a position where I am not seeking employment, so am happy to blog for a recognised site with an established audience. If I was seeking paid media work I’d weigh up the pros and cons.”

The Huffington Post is far from unique in asking some people to write for free, established business sites, some owned by major publishers, for example, very rarely pay for op-eds by businesspeople, who are seen as having something to promote. Politicians and academics are likewise rarely paid for op-eds.

Many are nonetheless sceptical of HuffPo‘s model, which draws large revenues while benefiting from people who write for free, often in hope of being offered paid journalistic work. The journalism union is currently working on a campaign about unpaid writing, which will likely focus on the new outlet. — Myriam Robin

Read The Chronicle, get the Post? Amid a huge profit downgrade this morning, APN formally launched its new paid subscription package. It’s launching it masthead-by-masthead, starting with The Chronicle in Toowoomba, which will launch a metered paywall in five days.

For an introductory offer of $3 a week for the first 12 weeks, rising to $8 a week after that, APN is promising subscribers a wealth of reading and viewing material, the company revealed this morning. Those who sign up will get:

Needless to say, it looks like APN has pulled out all the stops to make this as attractive an offer as it can. — Myriam Robin

Front page of the day. Did the internet kill creative careers? The New York Times Magazine argues it gave them wings … 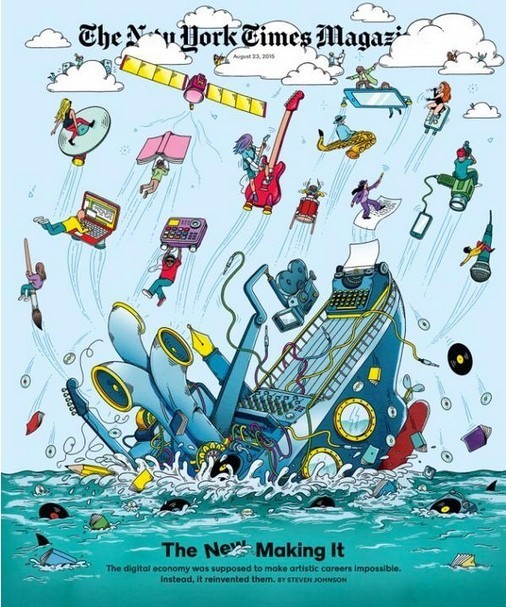 Somehow, composing takes a lot of time, especially if it’s dedicated to any academic thematic. Do not waste time and check first this recommendations: http://www.denguedenguedengue.com/simple-tips-to-compose-the-mba-admissions-essay-acceptable-for-harvard-four-top-recommendations/, hope it’s gonna be usefull for you!