It makes sense to fund major arts companies and not small ones because the large ones do most of the touring, says Arts Minister George Brandis. Except that is blatantly false. Crikey arts writer Ben Eltham and Crikey intern Joely Mitchell crunch the numbers. 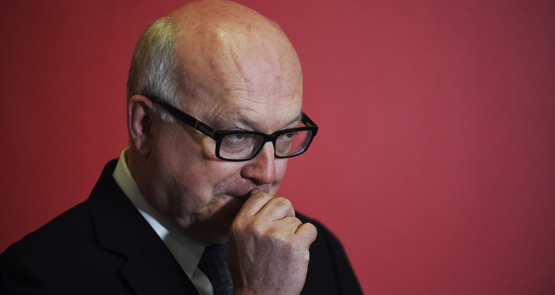 One of the most interesting moments in the first hearing of the Senate inquiry into George Brandis’ arts funding changes came midway through the first afternoon.

That was when the Performing Arts Touring Alliance’s Merryn Carter told Senator Glenn Lazarus and his colleagues that the major performing arts companies do not, in fact, do the most touring — far from it.

According to Carter, the major performing arts sector carried out only 18% of the international touring in the years 2010-14, while 82% was undertaken by the small-to-medium sector. She also pointed out that national and regional touring followed the same pattern: in 2013 and 2014, 32 of 44 tours funded by the federal program Playing Australia were from small-to-medium organisations.

These figures were important, because they directly contradict Arts Minister George Brandis. In justifying his National Program for Excellence in the Arts, Brandis has consistently asserted that the major companies are the ones that have the largest audiences and do the most touring.

The idea that the majors are simply bigger and more important than the smaller companies appears to be an underlying tenet of Brandis’ obsession with “excellence”. At Senate estimates, for instance, Brandis made the following claim:

This sounds impressive. Unfortunately for Brandis, there’s no evidence for it.

Taken together, the available evidence suggests that the many hundreds of smaller companies that make up the small-to-medium sector employ more artists, undertake more touring and reach a greater audience than the 28 major performing arts companies.

Unfortunately, we don’t really know for sure. High-quality data comparing the small-to-medium sector to the majors is simply not available.

That’s why the Senate inquiry testimony was so interesting.

Crikey has seen the aggregated data — in spreadsheet form — to which the Performing Arts Touring Alliance referred during the hearing. Crikey understands it was compiled from both publicly available major performing arts data and internal Australia Council databases. 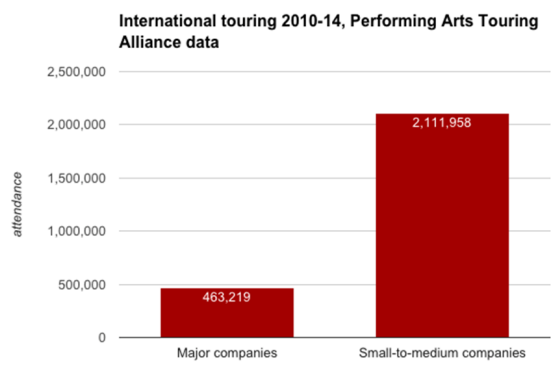 One small-to-medium company, Circa, had a higher figure for international attendance in that period than the entire major performing arts sector.

How can we assess this data? It’s important to state that this is not official Australia Council data, although we have repeatedly requested confirmation from the council.

But it is possible to get a snapshot of the inequities in Commonwealth arts policy by examining the output of a number of the largest performing arts companies against some of their smaller cousins. 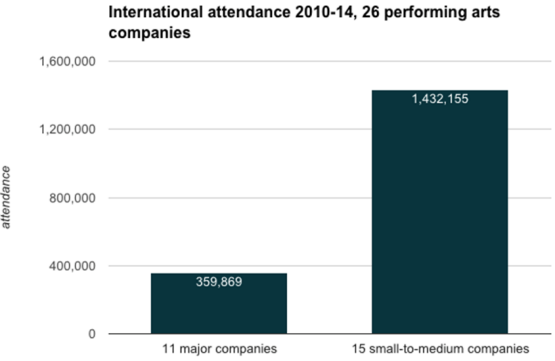 About a third of these attendances were from world-beating Brisbane company Circa, whose total attendance was 528,773. The Snuff Puppets, a small but lively puppetry company, reported 486,000 attendees. Smaller performing arts companies also toured well. Stalker Theatre had 42,850, Monkey Baa Theatre had 42,149, Patch Theatre had 40,690, and Windmill Theatre had 35,442.

The majority of these small-to-medium companies toured internationally every year. While some shows were niche affairs for an audience of 50, others were outdoor tours reaching more than 100,000 people.

During that same time frame, the total number of attendees at international performances for 11 major performing arts companies was 359,869. That’s about a quarter of the figures from the smaller companies.

The major company with the largest international figures was the Sydney Theatre Company, which had 120,381 attendees on the back of its very successful US tours. The widely travelled Circus Oz had 100,496, the Australian Chamber Orchestra had 59,766 and Belvoir had 51,369.

The figures for Opera Australia are particularly interesting. Its 2014 figures are not yet available, but between 2010-13 it sold only 21,331 tickets outside Australia. Based on the data available, Opera Australia’s international touring is less than 1% of the output of the Australia Council’s small-to-medium sector.

This would appear to shoot down Brandis’ claim that the major companies do most of the touring.

And yet Opera Australia is the largest major company and the single largest recipient of Australia Council funding. It will receive more federal funding in 2015 than the entire small-to-medium sector put together.

The disparity between the performance of the majors and the smaller companies is now a highly contentious issue in the cultural industries. As the Senate inquiry heard from a number of witnesses, George Brandis’ Excellence raid will hammer the small-to-medium sector, while the major companies will benefit.

The shake-out is already underway. Brandis announced $600,000 in new touring grants last Friday. They went only to companies from the major performing arts sector. No smaller companies were supported.

What the heck is ‘excellence’? Arts community tries govt in absentia

I believe the statistics are in our bones. Congrats, Circa. Does the Minister think excellence is pure or applied? If pure, where’s the theory? If applied, where are the theory and the practice? If he knows, why doesn’t he tell us?

Bring back the Borgias, say I. At least they knew quality art when they ordered it.
The Arser… sorry, arts tzar, is comfy in odd swearters reading cod larrikan doggerel.

So is Brandis lying or incompetent? Or both?