Don't believe the hype; all is not what seems when it comes to The Economist's city-by-city liveability Index.

Melbourne came first in The Economist‘s Global Liveability Index released yesterday. This is Melbourne’s fifth “win” in a row. Adelaide, Sydney and Perth ranked fifth, seventh and ninth respectively, as they did last year. Brisbane came in 20th again.

I’ve reviewed each release of the Economist Intelligence Unit’s (EIU) Global Liveability Index for the last five years. Here’s a summary of the key points:

Whatever its usefulness for companies sending executives on assignment might be, the index has little relevance for permanent residents of a city or for urban policymakers.

Of course, politicians won’t be able to resist making political capital from the survey, but the rest of us should understand it means almost nothing in terms of informing policy.

“We should be very proud of our city being named World’s Most Liveable City for the fifth year in a row. It is unprecedented for Melbourne and is particularly pleasing in a year when the Economist Intelligence Unit notes that many cities lost ground.

“We must be doing something right in our cities in this part of the world: half of the top 10 most liveable cities are in Australia and New Zealand.”

You’ve got to admire Doyle’s front: the City of Melbourne occupies just 1.4% of Melbourne’s urbanised area and has 2.4% of the population. As far as I’m aware, the municipality doesn’t administer a police force, run hospitals and schools, or build railway lines, motorways, sewage treatment plants or power stations.

The attributes that make Melbourne attractive to expatriates and consequently won it the EIU’s gong owe much, much more to state and federal policy than they do to the actions of the City of Melbourne.

Brisbane’s lord mayor, Graham Quirk, has a stronger claim to the rankings, since his municipality has a population around 10 times larger than Doyle’s, and runs a big fleet of buses and ferries. He made the best of Brisbane’s (relatively) low score, arguing the old “they don’t know what they’re missing” line:

“I’m sure these survey authors would change their mind if they paid us a visit, to see how we really weigh up to the criteria.”

The EIU’s report is at its most interesting when it explains why cities like Melbourne are preferred for expatriates over arguably more exciting cities such as Paris:

“Those that score best tend to be mid-sized cities in wealthier countries with a relatively low population density. These can foster a range of recreational activities without leading to high crime levels or overburdened infrastructure …

“Global business centres tend to be victims of their own success. The ‘big city buzz’ that they enjoy can overstretch infrastructure and cause higher crime rates. New York, London, Paris and Tokyo are all prestigious hubs with a wealth of recreational activity, but all suffer from higher levels of crime, congestion and public transport problems than would be deemed comfortable.”

I get the distinct impression few readers of The Urbanist think public transport is better in Australian cities than in New York, London, Paris and Tokyo!

There’s a lot more in my previous discussions of this topic, including consideration of an alternative measure that isn’t so kind to Australian cities.

Having said all that, Melbourne does do a lot of things really well. And while it pertains to conditions in 2011, this Crikey piece by Possum Comitatus on “Australian Exceptionalism” shows that we can work pretty well as a nation, too. 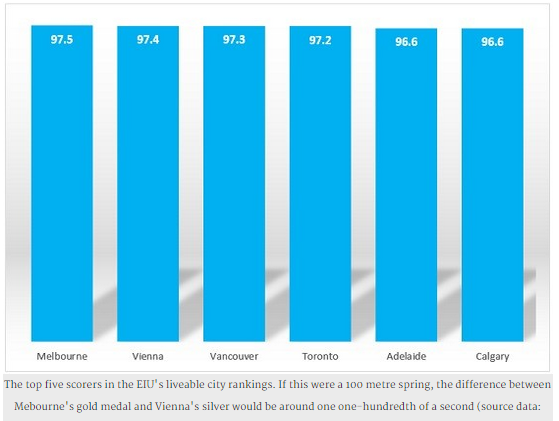