Rupert's dinner deal ... why is ScoMo courting Xenophon? ... who are Sharri's sources? ...

A spot of tea. It’s the “deal of the decade”, according to the papers this morning — the record $2.5 billion that will flow into AFL coffers from the broadcasters that won the rights to Australia’s greatest sport. The press conference yesterday looked like a line-up of power, with AFL chief Gillon McLachlan flanked by Seven’s Kerry Stokes as well as News Corp’s Rupert Murdoch — media mogul central. The Australian Financial Review writes this morning that negotiations “accelerated rapidly” once Murdoch was in town, but when it came to the actual presser everything seemed to slow right down. It was scheduled for 4.30, but the large crowd of journos was kept waiting for an hour to hear the big news, getting closer and closer to deadline for the 6pm news bulletins, according to the Oz, because negotiations went right down to the wire. So what was the hold-up? 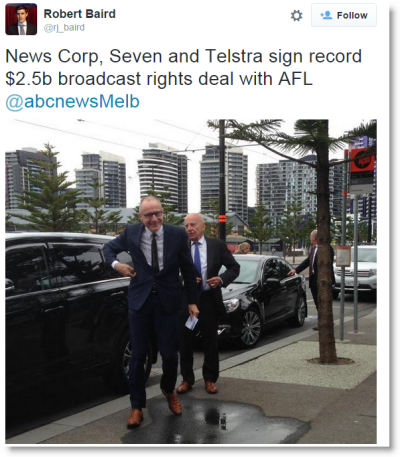 Murdoch and News Corp CEO Robert Thomson arrived in nearly matching outfits around 4pm and Stokes soon after, but it wasn’t the fine print that held them up — journos were told that the group was busy having dinner before facing questions. While we understand that it’s hard to think when you’re hungry, surely it could have waited? When a journo asked who picked up the tab, McLachlan said the AFL would be covering it — the league is about to come into some money, after all.

Having done the AFL deal and slung a few barbs at the NRL, the 84-year-old Murdoch family patriarch flew out of Australia last night for the Los Angeles on his new $84 million corporate jet. Now we have to wait to see if there will be any musical chairs among the editor class of News Corp papers. From the pictures of the AFL press conference, it was Rupert and News CEO Robert Thomson, plus Kerry Stokes. No sign of the co-executive chair of News, Lachlan Murdoch.

Pollie watch. A little birdie in Adelaide tells us: “I spotted Scott Morrison and Simon Birmingham poised to enter Nick Xenophon’s Adelaide office on Friday morning at 7.30 or so.” Social Services Minister Morrison was in Adelaide on Friday, promoting the government’s introduction of the Basics Card in South Australia, so did he use the opportunity to drop in on the crossbencher? Xenophon’s office tells us that Morrison and Xenophon did have a meeting on Friday morning to discuss legislation, but that Birmingham wasn’t there (we understand that one of Morrison’s staffers does bear a likeness to him, though). That’s a long way to go for a chit-chat — what could Morrison want Xenophon’s vote for?

Watching the watchers. We reported on Monday that The Australian‘s media editor Sharri Markson had been forced to revise her gossip column after the AFR reported directly opposing news regarding the contract of Tim Worner at Channel Seven. One tipster tells us the column raised more than just our eyebrows:

“Crikey wasn’t the only one bemused by Sharri Markson’s column on Monday — about Worner and Leckie. ABC insiders were guffawing abut her item on who might replace ABC News Director Kate Torney. Markson professed to know a short list from the headhunters, who somehow we don’t think would be [sending] anonymous emails to Ms Markson. No, it smacked of a wannabe placing his/her name cloaked in cover of a so-called contenders list. The list was so laughable it gave away Sharri’s real lack of knowledge about such things and potentially gave away her prized informant …

“Then there was this line about a possible Managing Diector-News Director team: ‘If we had to bet on a successor, we’d say Frangopoulos and Raschke could be a pretty good combination. The pair worked together setting up Sky in its early days around 1996.’ That’s Angelos Frangopolous (Sky CEO) and Rob Raschke Seven’s network news director who’s just been superseded by his network’s hiring of Ch9’s Craig McPherson as Director of both News and Current Affairs. We’re not suggesting Raschke himself is the leak but someone with great empathy for him may be.”

In a previous Diary column from a few weeks ago (by Darren Davidson and Michael Bodey), Raschke was also mentioned in connection with the ABC news director job, calling him “sharp”. Our tipster adds “everyone’s guessing at the ABC but Gaven Morris is widely tipped as the possible insider and there’s talk of a BBC type being the outsider.Someone who previously worked in the Australian TV scene quite a few years ago.”

Abbott and Heydon’s long history. The connections between Prime Minister Tony Abbott and embattled royal commissioner Dyson Heydon continue, with an enterprising scribe digging up this article from 1993. It shows that Heydon was a member of the  legal committee for the Australians for Constitutional Monarchy, of which Abbott was the executive director. While it’s not surprising — Heydon’s conservatism is no secret — it’s another straw. Will one break the camel’s back? 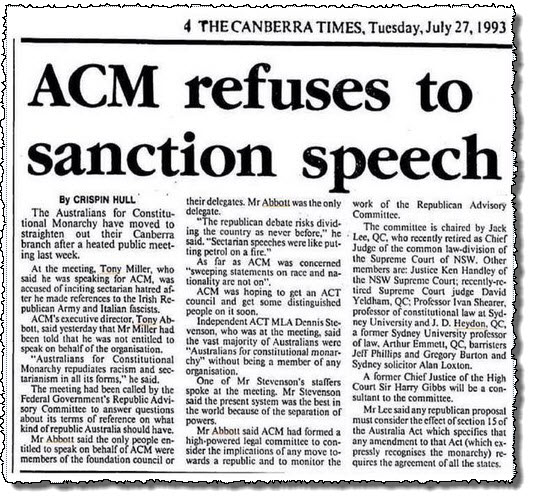 No Wickr correspondence. We know Communications Minister Malcolm Turnbull is in constant correspondence with ABC managing director Mark Scott, but is he trying to have any of those conversations on the down low? The Mandarin recently reported that public service employees are increasingly writing notes on Post-Its in order to avoid advice to government being released under freedom of information laws. We have been wondering whether Turnbull would like some of his conversations with the heads of the agencies he is responsible for to be a bit more covert.

We filed a freedom of information request with the ABC last month asking whether Turnbull’s office had sent any emails to either Scott or his assistant mentioning Turnbull’s favourite self-destructing messaging app, Wickr. Alas, it appears if Scott and Turnbull are communicating over Wickr, it wasn’t mentioned in any emails between the two. We’ve got similar inquiries in with SBS, NBN and Australia Post, but the ABC was prompt with its response.

Battle of the Holding the Man screenings. The Australian film Holding the Man is getting rave reviews all around as a coming-of-age and coming-out film based on the 1996 memoir by the late Timothy Conigrave. Perhaps unsurprisingly a few of the candidates for the 2016 federal election are looking to hitch their stars to the Holding the Man bandwagon. Earlier this month Melbourne Labor hopeful Sophie Ismail announced she would be holding a fundraiser screening the film for $30 on September 1, and this week the Greens candidate for Higgins, Jason Ball,  is holding his own screening on August 27 for $25 (or $50 for a “Keen Green”).