No rights for trees: how Abbott will gut environmental protection

The government's proposal to strip public interest litigation from the Environment Protection and Biodiversity Conservation Act will gut the act by removing a key enforcement mechanism. 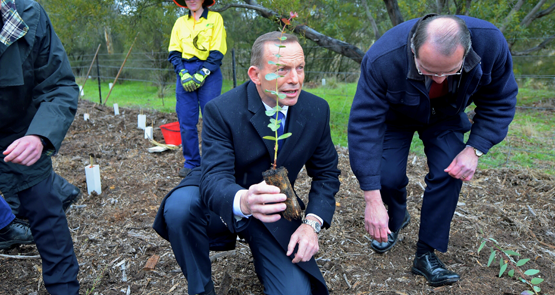 You may remember it if you ever studied law — American legal academic Christopher D. Stone wondered in 1972 “Should Trees Have Standing?”, an essay on why the environment should be given basic rights so that it could be better protected. If a legal fiction like a corporation could be given rights and thus have standing to bring legal action, Stone reasoned, why couldn’t natural objects like trees, rivers and other environmental features under threat from human activities?

The status quo in the US when Stone wrote that essay was that only property rights provided a basis for environmental litigation. One of Stone’s most compelling arguments was that property rights are a poor mechanism to protect the environment: extensive environmental damage caused by human activity may affect nearby property owners to only a limited extent, perhaps too small to make it worthwhile litigating against the party causing it, especially if the party is a large corporation with significant legal resources at its disposal; in any event, such litigation is no guarantee that the damage will be repaired. There’s also the problem that courts might decide that your right to a property unpolluted by the activities of a nearby property owner is subordinate to their right to use their property to make money.

That’s why public interest litigation is a critical means of protecting the environment. “Public interest litigation is one of the most significant means of enforcing environmental law and in enhancing the transparency, integrity and rigour of government decision-making about activities which impact on the environment,” veteran Howard-era public servant Allan Hawke wrote in his extensive review of the Environment Protection and Biodiversity Conservation Act in 2009 (10 years after Howard’s environment minister Robert Hill had introduced it). Hawke directly addressed the issue of standing:

“The Act contains expanded legal standing for third party applications which goes beyond that which is provided under many other Acts. In particular, access to judicial review through the extended standing arrangements under s.487(2) of the Act allows individuals and organisations who engage in environmental protection and/or conservation activities to commence judicial review applications. In the absence of s.487, some individuals and organisations may not have otherwise had standing to bring an application for judicial review under the general rules … These provisions have created no difficulties and should be maintained. The question is whether these provisions should be expanded further.”

That is the exact provision that the Abbott government now wants to remove, as part of an elaborate straw man exercise by which the threat of “vigilante litigants” and “militant green groups” is hyped into a threat to jobs. As Crikey has noted before, the government is incapable of selling any narrative that isn’t prefaced with the word “stop”. Its complete lack of an economic agenda or narrative of any kind has reduced it to Stop The Lawyers.

Has s.487(2) caused rampant vigilante litigation? “Despite all the fears that the above types of provisions would engender a ‘flood’ of litigation, they have been unproblematic. There is no evidence of them being abused and the number of cases to date has been modest,” Hawke found. As my colleague Josh Taylor writes today, the Australia Institute’s numbers bear this out: it says only 33 out of 5500 projects assessed under EPBC have been taken to court since 2000. In that period, around $560 billion have been invested in mining, including $380 billion in the last five years, and Australia is ranked as the world’s second-best destination for mining investment behind Canada (under Labor it was the best destination). In 2014, mining analyst Behre Dolbear gave Australia one of the best scores in terms of minimising permit delays.

In short, the idea of “vigilante litigation” is a lie. And without public interest litigation, enforcement of the act becomes problematic. Last year, the Australian National Audit Office examined the Environment Department’s enforcement of the EPBC approvals system and monitoring of approved (or “controlled) actions. The report was damning, and confirmed Hawke’s finding the public interest litigation was a significant enforcement tool. This is just a selection of comments by the auditors:

“…nearly 14 years after the enactment of the EPBC Act, Environment is yet to establish mature administrative arrangements to effectively discharge its regulatory responsibilities in relation to approved controlled actions … Environment is not well placed to demonstrate that it is effectively targeting its compliance monitoring activities to the areas of greatest risk … The increasing workload on compliance monitoring staff over time has resulted in Environment adopting a generally passive approach to monitoring proponents’ compliance with most approval conditions. As a consequence, the department has limited awareness of the progress of many approved controlled actions … Environment’s passive approach has also been evident in its approach to the management of non‐compliance.”

Without the public interest litigation that the government wants to kill, EPBC would be enforced by an under-resourced, passive, ignorant collection of Canberra bureaucrats under the direction of Environment Minister Greg Hunt. The government’s changes are nothing less than an effort to gut the EPBC by eliminating one of the most important means by which it can be enforced. It will restore a legal world in which corporations and other legal fictions have their rights fiercely protected, while environmental laws can be ignored without legal recourse.

How to beat the Leppington rap: first review, then review, and then… er, you get the picture

On car park rorts, the fix was in from the very start — and the bureaucrats knew it

Abbott, prepared to gamble our future against his?

The Liberal Party, and all those who support it, are dancing on the edge of insanity.

The difficulty is lack of jobs. In the absence of a real industry policy, only mining appears likely to produce jobs (although not too many). So mining must have a clear run.

But what if Australia had innovative manufacturers and service providers that, with some research and incentives, could enter export markets? Or is that picking (non-mining) winners?

While the Crikey Pack is at it, what about considering [merely as a start of course] rights for cockroaches, Ebola, rocks, viruses and other sentient / non sentient entities?
I must point out the order in which these entities is listed is not an expression of any perceived basis for such ranking.