Literary insiders have been left reeling as guest editors give Meanjin a new feel.

What happens when a university vice-chancellor and a tabloid editor come together to produce a literary magazine. Is the result … The Australian Financial Review? 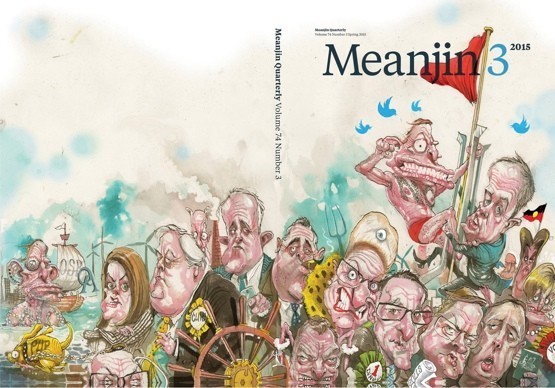 The lastest issue of Melbourne Uni lit mag Meanjin is being edited by the VC Glyn Davis, and former Herald and Weekly Times boss Phil Gardner is, as Crikey revealed, also helping out. While the issue isn’t out till September 15, the cover was released on social media yesterday, and has drawn a rather negative reaction from parts of Melbourne’s arts community, who are used to seeing Meanjin‘s covers be, well, rather more experimental. This time, the cover art was created by the Fin‘s in-house Walkley-winning cartoonist David Rowe.

One Melbourne literary insider says the magazine, under the guidance of Louise Adler (at Melbourne University Publishing), has always served as a “kind of bizarre quarterly for politicians — a testing-ground for their awful go-nowhere memoirs”, but also also provided “an extremely important space for new writers”. “They have completely squandered this year with a nonsensical line up of guest editors,” our source states. “My hope is they change ship very quickly in 2016 under Jonathan Green.”

The quarterly journal has been going through a period of “guest editors” this year since Zora Sanders stepped down as editor — new editor Green doesn’t actually take over the publication until December.