Another week of media outrage directed at the government kept Coalition ministers at the forefront of the conversation.

It was all same-sex marriage late last week and then the delayed Adani Carmichael mine project early this week, with Attorney-General George Brandis getting coverage on both issues, with Brandis describing section 487 (2) of the Environment Protection and Biodiversity Act as a “red carpet for radical activists” and introducing an amendment to the Act this week limiting third party applications to the court. Meanwhile, somewhat conversely, the government continues to seek greater regulation of wind farms.

Brandis also commented on same-sex marriage, Brandis ridiculed Social Services Minister Scott Morrison’s call for a referendum as unnecessary, saying a plebiscite was more than ample, while Liberal MP Warren Entsch ended up 27 places into fourth after he introduced his cross-party legislation, and PM Tony Abbott finished the week by reportedly telling those of his ministers who support a conscience vote on the issue to “pull their heads in”.

With new Speaker Tony Smith settling in and dropping from fifth place last week out of our top 20 today, the media spotlight has turned to Opposition Leader Bill Shorten, up one place into third, as he calls for former Justice Dyson Heydon to step down from the Royal Commission into trade union governance and corruption after admitting he knew an event he agreed to address was an organised Liberal Party fundraiser. Justice Minister Michael Keenan confirmed IS published some personal details of Australians after a Fairfax investigation, bumping him up 27 places this week into thirteenth, while Communications Minister Malcolm Turnbull was up seven places into fifth as leadership polls continue to drive discussion. 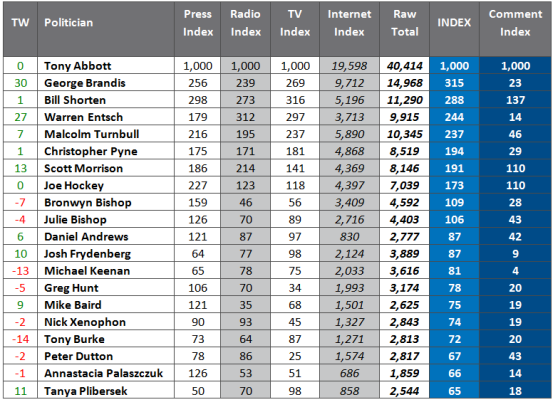 The PM received similar numbers on social media in the past week as back during the #libspill in February, with same-sex marriage at the forefront of discussions.

Tony Abbott was miles ahead on talkback, getting plenty of support for his stance opposing same-sex marriage, but a few critics as well.

With #putoutyourpeptides and headlines including “nobody gives two sh*ts”, the difference between the social media response to the outgoing Essendon Coach compared to Michael Clarke is stark.