A plebiscite on marriage equality will bring all of the wingnuts and homophobes out into the open in the spirit of "public debate". Don't make gay people beg for their right to equality because our Parliament is too cowardly to legislate it, writes freelance journalist Amy Coopes. 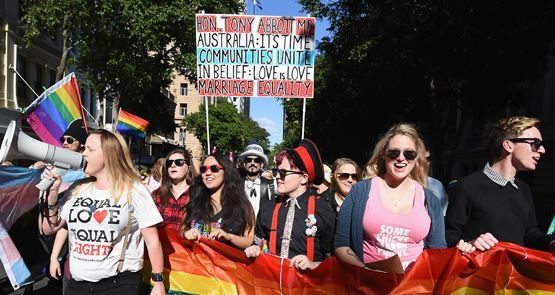 The Senate crossbench has decided not to wait until after the next election for the issue of marriage equality to be settled, and they are introducing a motion for a plebiscite on gay marriage today.

But when I think about having to live through this plebiscite, I feel ill. I imagine sitting on the bus, talkback radio blaring, averting my eyes and hoping that no one will read me as gay.

For me, and hundreds of thousands of Australians, the political is personal. The crossbench senators could scarcely imagine the humiliation implicit in their motion to have us beg the public for equality before the law. How it will force those already terrified and disgusted by who they are further into their closet of self-loathing. That it will embolden those who already think nothing of spitting at me and my partner in the street, of threatening us with rape to remind us that “women are for men”. To run this debate in full view and voice of anyone with a grievance to air will come at a steep personal cost.

Make no mistake, homophobia is not dead, buried and cremated. There are still many who believe we should get over it. Although the ALP abolished most discrimination against same-sex couples in federal legislation, for many of us, the issue of marriage equality isn’t about marriage per se, it’s about what withholding it represents. While we are unable to wed we are lesser citizens in a liberal democracy. This is no small thing. It’s emblematic of every small agony we repress: the estranged parent; the colleague who won’t make eye contact in the kitchen at work. It’s carte blanche for schoolyard bullies or the blind hatred of total strangers. How do we make sense of this to our children?

You don’t just come out once as gay, you do it almost every moment of every day of your life. You confess your sexuality to employers, to new friends, potential lovers; you come out to doctors and psychologists. Many of us come out to our family over and over, because they keep expecting — or hoping — we’ll change. We are expected, in every encounter, every waking moment, to expose ourselves in the most intimate of ways, and we are constantly vulnerable. To be openly gay, lesbian, bisexual, transgender, intersex or queer requires a deep reservoir of courage. But now we face another round of accounting for ourselves, appealing for charity, accepting the blows. Another failed bid for equality on the hill, in the High Court. Now a plebiscite to render the humiliation complete.

I was 17 when the Howard government first started the ideological wars over my existence; by the time I was 21 I was officially a second-class citizen, singled out by the 2004 amendment to the Marriage Act, which passed Parliament with the support of both major parties with no public consultation. That amendment specifically excludes me, stating:

Certain unions are not marriages

A union solemnised in a foreign country between:

must not be recognised as a marriage in Australia.

This debate has raged my entire adult life, and as the obsolescent have grown more desperate, the stakes have mounted, the tenor more vicious. I can’t imagine what it would be like coming out as a teenager today, raised on the shrill discourse of senators Cory Bernardi and Eric Abetz. Hatred kills and it’s dismissed as collateral.

To invite the public to settle this is political cowardice and hypocrisy writ large by those who can’t even bring themselves to hold a conscience vote.

We didn’t need a plebiscite in 2004, and we don’t need one now. Please, hear us. Before the damage is done.

Thank you. You are spot on.

Notwithstanding it is the opinion of the High Court that our Parliament has the constitutional authority to decide this matter through a change to existing legislation (the Marriage Act) – thus making ANY vote unnecessary – such a vote is gut-churning to me because any campaign associated with it is designed to give a formal platform to the “NO” crowd.

It will be horrendous. A chorus of Bernardi-Abetz’s will sing from high and the likes of Katy Faust will all, under the guise of free speech, take their tax-payer funded megaphones and say really horrible things about gay people; they will cloud the issue with red herrings about the rights of children and if we’re **really** lucky, we’ll, again, have a chance to hear Bernardi’s thesis about homosexuality and bestiality.

How dare the government contemplate such a horrible pathway to “equality”. This issue underscores their divisions and their weaknesses as much as it underscores their obsession with petty culture wars. They aren’t here for all Australians; they’re only here for the dwindling, bigoted Christian base. We gay people are merely a soft target for them -as we always have been – and we just can’t rely on our hetero brothers and sisters to look out for us because the issue isn’t personal for them.

No need to beg, don’t vote LNP next election. The change in attitude you seek has more chance of happening.

Dear Amy, do you realise that by admitting that the flat Earthers are hurting you, you have given them a great deal of satisfaction and as long as this Government is in power, you will be whistling in the wind? However, this flat Earther government are on their last legs and you will not have to wait much longer for justice.
I, too, have been subject to discrimination, but in my case the other mob had all the guns and I survived only by disappearing from the face of the Earth for a while.
All the best.

Amy – Please don’t think that ALL heteros are against you. It is simply not true.
I am a very senior citizen, female, who has a much loved nephew and his male partner who are completely accepted by us and their extended families. This has been the situation for decades.
I really can’t even comprehend where all these hateful people are coming from. Who cares what sexual orientation someone is – its all religious bulls+it. I know its easy to say, but try to ignore these awful people. They are the ones who are diminished by their attitudes, NOT YOU!!!

Amy, I’m really sorry that my comment has been moderated, because I wrote to support you.
Please read what I had to say when the comment is released.