Call in the Green Army! Threat of ‘green lawfare’ takes down … wait … only two projects?

Is "green lawfare" really destroying our economy and way of life? Er ... 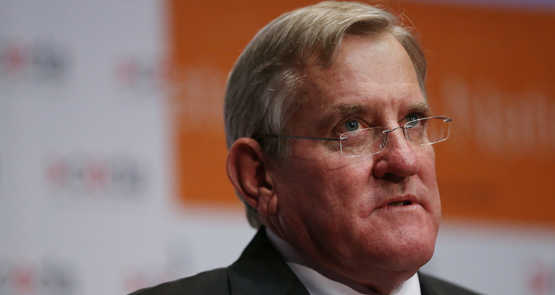 The government’s rush to pass a law to prevent environmental groups from challenging mining projects in the court seems to be centred around just one case — Adani’s Carmichael Mine — and is despite the fact that there is no evidence that mining companies are under attack by “green lawfare”.

Brandis said the provision was “a red carpet for radical activists who have a political, but not a legal interest, in a development to use aggressive litigation tactics to disrupt and sabotage important projects”.

Appearing on ABC’s 7.30 last night, Industry Minister Ian Macfarlane evaded questions on how many projects had been delayed or stopped by the legislation.

Macfarlane: Well, this is the first case in Queensland where there is a clear and deliberate pattern …

Sales: … But I mean overall, because you said project after project?

Macfarlane: Well, we’re seeing projects in NSW held up in environment courts for six and eight years. They are out of our jurisdiction. The issues relating to the EPBC Act in this specific case are in our jurisdiction and we are going to address it. So we have a common sense approach to environmental permitting in Australia. We have the highest level of environmental permitting in the world, we need to make sure the system works, and isn’t plagued by those environmentalists who don’t want to see any economic development in Australia.

The provision in the law, enacted in July 2000 by the then-Howard government, has been used 33 times in the last 15 years, according to an analysis by The Australia Institute. This is out of 5500 projects referred to the minister under the environmental impact assessment provision, with 1500 requiring formal assessment and approval.

Of the 33 court cases, proceedings by third parties only related to 22 projects, meaning just 0.4% of all projects referred to the minister under the legislation were affected.

The Australian Institute found that of the 33 actions, four were discontinued or resolved, six were successful in obtaining a judgment or orders in their favour. The institute said in just two of these cases did the third party achieve its desired outcome.

Crikey asked Macfarlane’s office if he disputed The Australia Institute’s findings. We were directed to Environment Minister Greg Hunt’s office and did not receive a response by deadline.

The latest “successful” case listed by the institute was the Mackay Conservation Group’s case against the government over the Carmichael coal project planned by Adani in Queensland.

This court overturned Hunt’s approval of the project because it found that the Environment Department had failed to adequately assess the impact of the project on the yakka skink and the ornamental snake (The Daily Telegraph was so incensed by these creatures it shamed them with photoshopped hard hats). 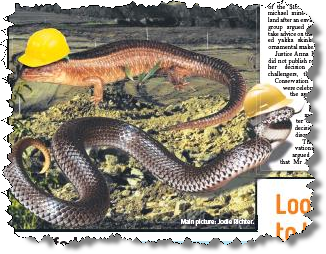 Why is the government so intensely focused on changing the law, seemingly based on just one case?

The government is arguing the change is about protecting jobs and the economy, in particular for a project the size and value of the Carmichael coal project. Ministers, including Macfarlane, have cited the importance of the project for employment and the economy by claiming it is “a $20 billion project with 10,000 jobs” despite evidence that the project’s value is closer to $7.8 billion, and it is estimated it will create just 1464 jobs per year.

While not a certainty, Adani’s lobbying efforts may have had some influence. It has been reported that Adani has hired former Liberals, Nationals, and Labor staffers to lobby the politicians over its Australian projects.

Although no impropriety is being suggested, it is worth noting that Adani donated $49,500 to the Liberal Party prior to the 2013 federal election.

Macfarlane also suggested that the Carmichael challenge is just the start for environmental “vigilante litigants”.

“Well what it has to fear is as I say, this manual that has been released by the environmentalists, which clearly states, this is how we’re going to stop coal exports in Australia. We believe that this is the beginning of a very well-orchestrated and highly funded campaign that will see the end of coal mining development in Australia, and then they’ll move to the next project and the next project, because it’s more than just a coal mine. It’s a whole economic proposal for Central and North-eastern Queensland.”

Crikey asked Mackay Conservation Group, the environmental group that challenged the government on the Carmichael Mine, if it had a “manual” on how to stop coal exports in Australia. The group said it had no such manual, but believed that Macfarlane was referring to a three-year-old leaked draft document from Greenpeace regarding how to stop coal mining in Australia.

“We will lodge legal challenges to the approval of all of the major new coal ports, as well as key rail links (where possible), the mega-mines and several other mines chosen for strategic campaign purposes. Legal challenges will draw on a range of arguments relating to local impacts on wetlands, endangered species, aquifers and the World Heritage Listed Great Barrier Reef Marine Park, as well as global climate impacts. Only legitimate arguable cases will be run.”

The document itself doesn’t appear to provide an explanation on how to lodge cases using the EPBC Act, and the proposed litigation only relates to projects between 2011 and 2013.

The government’s legislation to prevent third-party environmental groups from challenging the projects is expected to be introduced into Parliament later this week, and while the government would be keen to see it pass, it is likely to run into trouble in the Senate. Independent Senator Glenn Lazarus, who has form in challenging mining projects, told the ABC this morning he wasn’t inclined to vote in favour of the legislation.

The government is attempting to wedge Labor on the issue, with a split over the “green thumb and the blue collar”, to quote Assistant Treasurer Josh Frydenberg, but Labor doesn’t appear to be biting yet. Labor MP Ed Husic told Sky News this morning that it was unlikely the legislation would pass given it was being led by Brandis.

“Legislation by a government – to cover it’s own inept mess”?
[Ever watched a cat cover it’s shit – this government obviously has, and it’s learned from it.]

As Keith Cousins said this morning on Radio National, it’s not lawfare but fair law

Love that last sentence – well done Mr Husic.
Echos of Di Natale on Q&A “none of the Abbott cabinet got there on merit….”

I hope they bring their shovels.
It is good to see that some things remain the same, such as the Daily Telegraph’s puerile subservience to the carbon lobby.
The government has all the usual suspects pushing this barrow; on AM this morning Eric Abetz was showing his ignorance…I note he was suspiciously quiet on the SMS sackings of the Sydney waterside workers.
This is a test for the Labour party not to be cowed by these bullies; they could start by this government throwing the car workers on the dole queues.

How refreshing to see ornamental snakes rather than cabinet ministers wearing hard hats. Not the same species but doubtless of the same genus.