Exclusive watch. Here at Crikey we enjoy monitoring the liberal use of the “exclusive” tag at the News Corp papers, especially at The Australian, where quoting a blog (which has already been quoted in Crikey) will have editors reaching for the red ink. A source tells us the News Corp love for exclusivity extends throughout all areas of operation — right down to the cleaners. This picture was taken at News Corp’s Melbourne offices, showing the contractors know what business name gets the work rolling in: 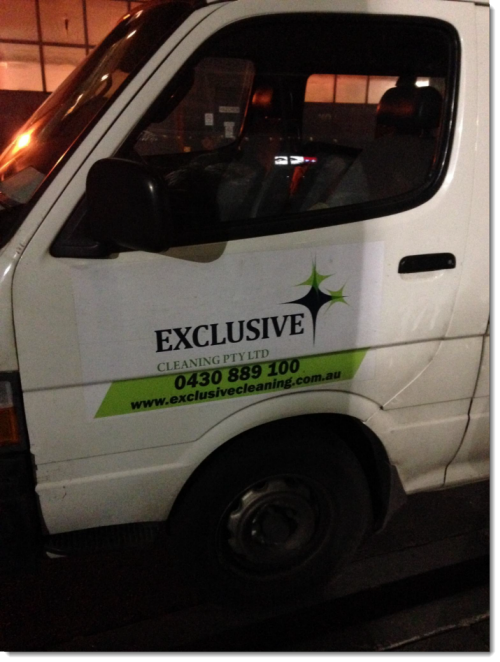 Redundancy toll at Toll. In February we reported that Toll was about to start outsourcing its IT services, or as Toll calls them global information systems, which would result in job losses. At the time we heard that Optus and Infosys were the partners being considered, which Toll confirmed today. We were also told by a tipster that the IT department would be shedding almost half its staff, from around 700 to 350 people in waves over the coming months. We asked Toll how many jobs would go and when, and were told the numbers were yet to be confirmed. A Toll Group spokesman told us that the redundancy process was “rolling process”, with staff informed of their futures as each department was reviewed over the next 12 months. “We’ve also got redeployment opportunities … where possible we’ll redeploy people,” the spokesman said. The spokesman said the true number of job losses will be known at the end of the redundancy process.

Sticks and stones. New Speaker Tony Smith seems to have settled into the job quite well, ejecting fewer MPs than his predecessor. While much has been said of Smith’s penchant for classic cars and the Carlton football club, one bit of history that hasn’t been rehashed is a former nickname. We hear from a Canberra veteran that in his days as a press secretary to Peter Costello, to whom he was “incredibly loyal”, Smith once had the nickname “pooper scooper”. The moniker was bestowed because of Smith’s habit of following his boss around the press gallery, mopping up whatever was said to the journos as he went through — or less eloquently, “cleaning up shit”.

Anyway, here’s Wonderwall.  A tipster discovered an Oasis in Parliament House last night, and by that we mean not a water source in a desert but the sounds of the ’90s Britpop band. A singalong to the classic Wonderwall could be heard coming from the office of NSW Labor Senator Deb O’Neill — report is that it was rocking, but we don’t know who exactly was taking part. Wonderwall is of course the popular favourite, but Ms Tips prefers Don’t Look Back in Anger — perhaps that would be too much to ask of the residents of APH.

Glitter bombed. Activist group GetUp expressed its displeasure with Coalition MPs who voted against same-sex marriage in their party room meeting last week by sending them envelopes full of glitter. The craft substance, while associated with kindergarten, has previously been used by start-up “Ship your enemies glitter”, because it gets everywhere and takes months to remove. A quirky idea from the lefty group, but Liberal MP Craig Laundy thought they took it too far. On opening the letter, his staff were concerned about what the envelope contained and called emergency services yesterday. Thirteen response vehicles later, it turned out just to be glitter. Laundy was less than impressed: 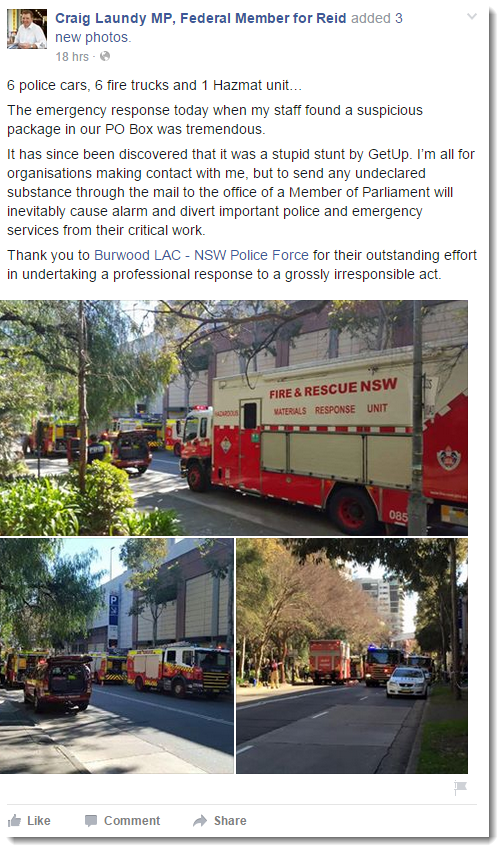 Higgins shenanigans. It’s been just over a week since both the Greens and Labor announced their candidates to take on Kelly O’Dwyer in the blue-ribbon seat of Higgins in Melbourne’s inner-eastern suburbs, and we hear that the reporting on the challenge from the Greens’ Jason Ball and Labor’s Carl Katter has already ruffled some feathers. One tipster tells us that Labor has already decided to preference the Liberals over the Greens in order to push Ball out of the race, saying that it is seen as payback for the Victorian seat of Prahran, where the Greens’ Sam Hibbins won the seat from Liberal Clem Newton-Brown. It seems far-fetched to be talking about preferences so early, but we put the call in to the ALP anyway, to no reply. We also hear from a blogger and activist who says he was blocked from Facebook after posting  a link to a previous Crikey article on Katter to a group on the site. The blogger, Michael Barnett, also posted screenshots of offensive messages that he says were from Katter. Also in the democracy of Facebook, in the short time since Ball was preselected, he has overtaken O’Dwyer in Facebook “likes” — obviously not scientific polling, but interesting all the same.

I’m an ALP member and I have heard rumblings about Labor preferencing the Liberals over the Greens in Higgins such as what happened in Melbourne Ports last election. Although there is a general detestment of the Greens by many inner city ALP supporters I think it is extremely stupid, for a myriad of reasons, and the view it is payback for Prahran is stupid, as Labor would have lost the seat and it is completely justifiable how the Greens used preferences to win. The general view from most ALP supporters in suburban branches is that the ALP would prefer a Green MP over a Liberal MP.

Not really of interest (re: Ball and Higgins). He has as much chance of winning in Higgins as I do winning he lottery. That is, almost zero.

I doubt the Liberals will lose Higgins but it will be a lot closer than same people think. The Greens will come second, that is almost certain, although even a Liberal source stated in the Herald Sun said that polling was dire and that O’Dwyer could lose. Whether or not I believe that is something completely separate although I wouldn’t rule anything out.

Smith was Jelly-back’s “Groom of the Stool”?

As you seem informed on the speaker’s performance during question time, is he easier going than his predecessor or are the ALP better behaved?