Batten down the hatches, HuffPo is here. Plus other media tidbits of the day.

HuffPo lands. After years of delays, The Huffington Post has finally landed in Australia.

It launched with an exclusive interview with Foreign Minister Julie Bishop. In the interview, Bishop signalled her support for a same-sex marriage plebiscite, saying the issue “hadn’t been fully debated” in Australia. The front page also includes an opinion piece by federal Liberal Ewen Jones explaining why he’ll cross the floor to vote on for a same-sex marriage bill, provided it has exemptions for religious institutions, and another piece by Anthony Albanese on his passion, public transport. 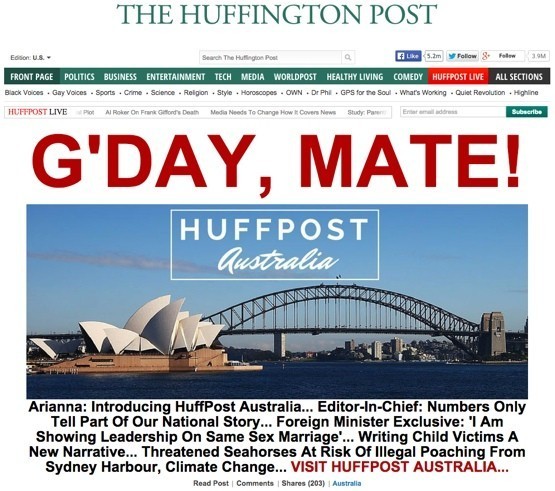 The rest of the website has the same mix of news and lifestyle content jumbled together in the style the Huffington Post is famous for. Interestingly, one item on the front page, which looks exactly like a HuffPo story, actually links to a piece on The Guardian. Crikey understands this is intentional — which is an unusually generous approach to content produced by a rival.

“Finally, I’m thrilled that we’re launching HuffPost in Australia in partnership with Fairfax Media, a leading independent, digitally-led media business and publisher of the Sydney Morning Herald, among many other publications,” Huffington continues. “I especially want to thank Fairfax CEO Greg Hywood and Group Director of Digital Ventures Guy Reypert. We couldn’t have asked for better partners as we’ve gone about the work of building HuffPost Australia.”

Interestingly, Fairfax’s leading website, The Sydney Morning Herald, hasn’t teased or taken copy from the HuffPo’s Julie Bishop scoop, at least not yet. While Fairfax owns an array of digital sites, Huffington Post is the first non-niche joint venture. How it exists with Fairfax’s largest mass-audience websites will be interesting to watch.

Earlier this year, media buyers and analysts told Crikey HuffPo would probably cannibalise Fairfax’s readership to some extent. But, by giving the company a financial stake in a competitor likely to do well, they figured it was probably worth it. — Myriam Robin

Three cheers or three fears? Ad-blocking software is loved by internet users the world over, but it is also the single biggest danger to the myriad companies and organisations depending on ad revenues on the net. Now a study has concluded the slowing rate of growth in revenues from the likes of net giants Bing, Google and Yahoo this year has resulted from the rapid growth in ad-blocking software use on the net. The now annual study, from Adobe and Page Fair, released in the US last week, reveals the loss from this software this year will reach an estimated US$21.8 billion and almost double to more than US$41 billion by the end of next year.

The study estimates that the number of people using ad-blocking software jumped 41% in the six months to June to 198 million monthly active users. The number is certain to soar later in the year when the new operating system update for iPhones is released (in either September or October) with an ad-blocking feature included. The survey estimates that 45 million active users in the US use ad-blocking software (up 41% in the first half of this year).

The growth in mobile blocking expected after Apple’s new IOS 9 is introduced is perhaps the biggest danger to advertisers. Mobile is thew fastest-growing area of ad spending. The Interactive Advertising Bureau in the US said last week mobile ad revenues jumped nearly 65% in 2014 to just on US$32 billion. Mobile display advertising overtook search as the dominant segment and accounted for 47.4% of the total global mobile advertising revenue in 2014 at just over US$15 billion. Mobile search accounted to US$14.7 billion. For advertisers looking for a pay off redirecting ad spending away from TV, radio, newspapers and other print options and to mobile, the forecast is a rapid growth in mobile ad blocking will be bad news. It will be interesting to see if the IOS 9 feature acts on the ads embedded in Facebook news feeds. Now that would be a dramatic move if it does. — Glenn Dyer

Business Daily to take on Business Day? News Corp’s tabloids have launched a new unified business section. Business Daily will run in the The Daily Telegraph, Herald Sun, The Courier-Mail and The Advertiser.

The Australian’s CEO Nicholas Gray is quoted in the release saying between Business Spectator, the Australian Business Review (in the Oz) and Business Daily, “it’s now easier than ever for advertisers to access Australia’s largest and most influential business audience”. “The formula which drove the success of Alan Kohler’s Business Spectator — fast straight breaking business news and quality commentary tailored to the audience — has now been applied to News Corp Australia’s metro publications.”

Murdoch-funded rubbish. Every time The Australian refers to our national broadcaster it does so as the “taxpayer-funded ABC”. Yesterday’s edition carried three such mentions, all intended as disparaging. But why single out Aunty for this specific appellation? Why not also apply it to the “taxpayer-funded army”, the “taxpayer-funded High Court”, or the “taxpayer-funded Australian Taxation Office”, for that matter? The ABC has been around since 1932. The fact that it is funded by government is hardly news. Just under 20% of the workforce are directly employed by our state and federal governments, and at least as many again must rely largely on public service custom and contracts for their jobs. Federal government spending now exceeds $400 billion annually. The ABC’s share of that total “taxpayer funding” is miniscule. — Former Media Watch executive producer David Salter

Faine files. Occasional moments from, Jon Faine, Australia’s most irrasci …most invaluable public broadcaster. On Monday, Faine was speaking to Victorian Health Minister Jill Hennessy, who was talking about a new health report that would identify inefficiencies in the system. Faine interrupted: Another report! When are we going to cut bureaucracy and red tape and let doctors and nurses do their jobs!

Then on Tuesday, a caller announced the problem with education was red tape. Sayeth Faine: What is this mania for cutting red tape! We need proper regulation! 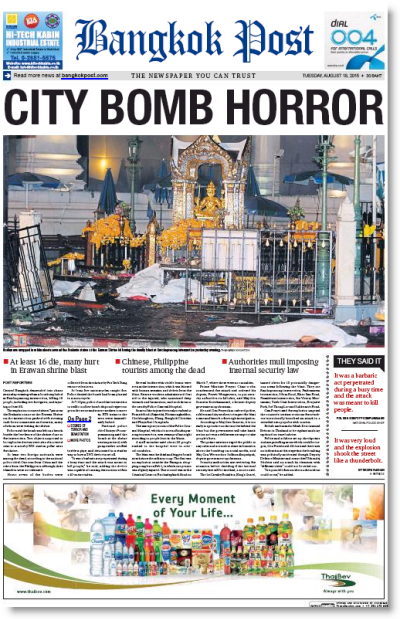 Every time The Australian refers to our national broadcaster it does so as the “taxpayer-funded ABC”.

Many people are saying that so too, as with the ABC, there should be a reference to the taxpayer funded $800 million to which the NewsCrap organisation was a beneficiary.

Lady Penelope – when will we know when SSM is “fully debated”? When Toady says so, or when Whyalla is under water?

Was going to suggest, given that New Corp seems to pay very little tax, and that the Australian never makes any money, that it be designated as the ‘Taxpayer subsidised Australian.’

I love the irony of the Australian right wing nutter opinion writers referring to “the tax payer funded” ABC. They who seem to have a job for life in a News Corp subsidised paper that has never paid its own way. They Publish their right wing bile courtesy of Uncle Rupert’s continued patronidge. Once he goes, I think the OZ will be dead in the water. No great loss politically but it will be a loss that there is no national paper that can tackle national issues. The OZ in my mind failed that test too often and will pay the price.

They want it all – Murdoch’s “Ministry of Misinformation and Obfuscation”.