Even before last night's bomb attack in Bangkok, Thailand's political economy was on shaky ground. 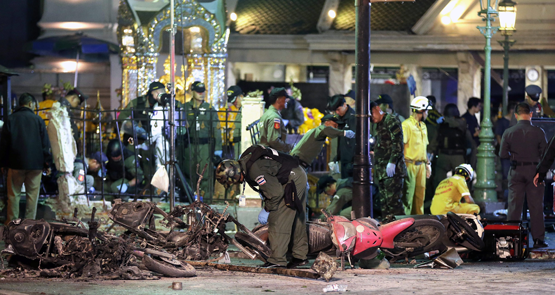 Caught up in the blast was the Hindu Erawan temple, a major tourist attraction, and Central World, one of the city’s biggest shopping malls, in an attack clearly designed to cause maximum carnage and international attention. CNN has dramatically called the Ratchaprasong Intersection — where the Erawan temple was located — the Times Square of Bangkok. That’s not far off.

In what looks to be brazen challenge, the attackers, as yet unknown, chose a target that is also opposite Bangkok’s Police Hospital, which is attached to the headquarters of the Royal Thai Police.

Thailand’s government is battling on two fronts: one in the country’s south, where a decade-old civil war between the military and the separatists in the nation’s three most southern and predominately Muslim provinces has killed 6000 people since 2004.

It’s Thailand dirty and not-so-little secret war, where motorcycle bombs, the apparent modus operandi of last night’s murderous assault on an unsuspecting city, have been common. A distressing number of children have been the victims of attacks by insurgents  — as ruthless and unnecessary as the military force has been — with little respect for the lives of their own people.

The other is a cold war — at least for now — but is also being waged by Thailand’s military, now installed in Bangkok’s Government House, at least semi-permanently. This war is fought against the so-called Red Shirt forces loyal to the government of exiled prime minister Thaksin Shinawatra and his sister, Yingluck, also a former prime minister. Thaksin was overthrown in 2006, and Yingluck was forced from power on May 22, 2014 — the 13th successful coup d’etat since 1932.

Thaksin’s supporters have been remarkably restrained since the coup, giving the junta every opportunity to deliver on its promise of a return to democracy with fresh elections — originally slated for the end of 2015 but now the subject of serial delays, the latest timetable commits to an election by 2017. And last week, Thaksin, who kicked off his career as a policeman, was ignominiously stripped of his police rank by the junta.

It’s worth noting that Central World was burned down during the political unrest that swept across Bangkok in 2010 and left 90 people dead.

Current Prime Minister and then-coup leader General Prayuth Chan-ocha also appears to be in an increasingly shaky position, he is said to be considering appointing his younger brother as army chief amid reports of factionalism in the armed forces, rife with growing concerns of a second coup.

One other option, although a longer shot, for the blame could be radical Islamist groups, as Bangkok has long been considered a “soft” target — in much the way that Bali was — due to the millions of tourists who pass through each year.

One more adjacent theory that was doing the rounds in Bangkok this morning was that the attack might be related to the Thai government’s repatriation of about 100 ethnic Muslim Uighurs back to China last month. The Chinese government is locked in battle with Uighurs who hail from the north-west province of Xinjiang. Chinese nationals in tour groups tend to visit the temple in the evenings, industry sources said, after buying goods at a nearby hyper-mart.

Politics are not Thailand’s only problem right now given its export-led economy in an increasingly deep funk. A police spokesman said only hours after the blast that the immediate target of last night’s attack was to “disrupt the economy”. Frankly, it wouldn’t take much.

In a research note issued on the day of the tragedy by ANZ, entitled Thailand: Land of Frowns Unlikely to Cheer Soon, the bank’s analysts joined other economists in a growing chorus of concern for an economy that is, by any measure, now the sick man of south-east Asia. Tourism, which has recovered since it was pummelled by protests and the coup,  is set to take another hit with reports last night that at least three foreigners were among the people who lost their lives. More than 120 others were injured. Two of the dead were from China, a country that has almost single-handedly lifted Thailand’s tourist sector.

In the hours after the blast, a jumpy city was startled by a thunder and lightning storm, an oddly rare event in in a remarkably dry “rainy season” so far — the legacy of the increasingly fierce El Nino weather event, which has caused the country’s biggest drought in 30 years.

The unseasonal dry weather has hit Thailand’s north, the stronghold of the Red Shirts, cutting the nation’s main rice crop and causing added pain to farmers already struggling under an increasing burden of consumer and small-business debt.

The attack has cast doubt over the imminent visit of South Australian Premier Jay Weatherill and his 100-strong business delegation, who had an official dinner scheduled for this Thursday night in Bangkok.

This would have continued the recent rapprochement between Australia and Thailand, whose relationship was sternly tested by Australia’s aggressive stance against last year’s coup, one matched in the Western world only by the United States.

After holding its breath for 10 months, the Abbott government finally eased its opposition to the junta, with Foreign Minister Julie Bishop visiting in March to meet with Prayuth.

Two weeks ago, Industry Minister Ian Macfarlane finally rescheduled a visit that was cancelled last December as street protests began to roil the city and would eventually pave the way for the coup. Macfarlane’s main purpose this month, as last year, is to find whether there is a natural home for Australia’s tech-savvy auto parts-makers in Thailand, the world’s seventh-largest car maker.

But the Australian government’s biggest concerns right now are for the tens of thousands of Aussies citizens in Thailand at any given time. There are police alerts out for about a dozen busy city intersections, with fears of a follow-up attack in what is now an officially unpredictable and potentially quite unstable situation.

Seeing the ocean through the trees in Gunns debate

The Erawan Shrine is always busy, night and day. I doubt that the Malay insurgents are responsible, they have done nothing in Bangkok yet so why would they start now?
More likely for me is the red shirts, a lot of people were murdered my the army around there. I remember seeing the Central World being rebuilt after the fire. I was astonished that they had to demolish concrete columns and beams on the facade, such was the heat of the fire. A little reminder of the ignorance of those who dont believe that a fire could bring down a steel building like the Twin Towers.
I doubt that the Uighers were responsible even though Chinese tourists visit the site in droves.