What do we want? Marriage equality! When do we want it? Yesterday! 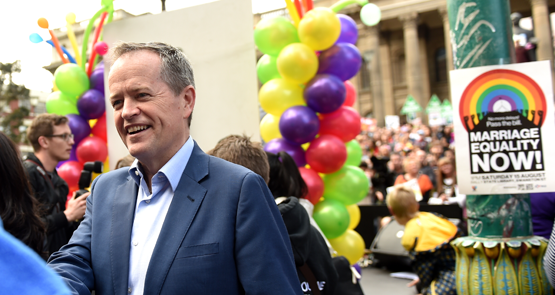 The general theme of a pro-marriage equality rally on the steps of the Victorian State Library at the weekend  was “why are we still here?”.

Alas, it wasn’t to be. When backbench Liberal MP and marriage equality supporter Warren Entsch brought up the issue in the Liberal party room, a special six-hour meeting of the Liberals and the Nationals attempted to put the issue to bed at least until the next election.

The Melbourne rally still went ahead, but rather than a call for those MPs still sitting on the fence or those yet to “evolve” in favour of same-sex marriage, it became one of exhaustion, and one centred directly on Prime Minister Tony Abbott and those within the party determined to stonewall movement towards marriage equality for as long as possible.

Labor and the Greens were both well represented, with both claiming the issue as their own (the Sex Party was there too). It is no surprise that the moderates of the Liberal Party who support same-sex marriage, such as Kelly O’Dwyer, would want to avoid this event this time. O’Dwyer’s two opponents were represented, with Labor’s candidate in Higgins Carl Katter in attendance, while Greens candidate Jason Ball was represented by large “equality” signs in the style of the Obama “hope” campaign (he was unable to attend under doctor’s orders after a recent knee reconstruction).

While many signs mocked the Prime Minister for his stance — and his choice of swimwear — one sign simply put the issue into context, simply stating: “It is 2015.”

There was no new argument to be advanced at the rally, but that is not the rally’s fault. Everyone knew every argument to argue against same-sex marriage had been well debunked. Children need a mother and a father? Tell that to Maya Newell, the director of Gayby Baby, a documentary on four same-sex couples who are raising well-adjusted children even without the ability to get married.

Gay people don’t want to be married? Tell that to gay rights campaigner Dennis Altman, who spoke in favour of passing marriage equality despite often being quoted by the Australian Christian Lobby and others as being an example of a gay man who doesn’t want to get married.

Opposition Leader Bill Shorten did his best impression of Malcolm Turnbull circa the republic debate, stating that “Mr Abbott and his right-wing Liberals” had broken Australia’s heart in deciding against a free vote on same-sex marriage before the next election.

“He’s given into the extreme right-wing voices in his party. He has betrayed the trust of Australians,” he said.

“The referendum is already organised for next year, it is called the federal election,” shadow attorney-general Mark Dreyfus told the rally.

It is this point where the Greens and Labor, increasingly on the same page as regards same-sex marriage, begin to diverge. Last week the Greens joined crossbench senators to back a plebiscite at the time of the 2016 federal election, if a plebiscite is the only option on the table. Labor has said it won’t back a plebiscite.

The Greens want the Senate to be able to choose the phrasing of the question, to ensure that the government can’t word it in such a way that it would be doomed to fail.

The Greens’ willingness — along with Australians for Marriage Equality — to even consider entertaining the idea of a plebiscite has confused some. While it is a potential circuit-breaker for an issue that isn’t going anywhere until the next election, many have warned that a plebiscite could be more damaging and more expensive than it is worth, when pressure can continue to be mounted on the “wet liberals” to force the PM’s hand for a vote before the election.

As Shorten noted in his speech, a plebiscite would lead to a divisive campaign.

“It will unleash a divisive debate. We want to support marriage equality because I do not want another generation of Australians growing up feeling stigma because of their sexuality. I have no doubt that a majority of Australians would vote for marriage equality, but the price this community pays as the debate in some parts become so dreadful,” Shorten said.

“It would be a $150 million taxpayer-funded opinion poll to tell us what we already know.”

MC Anthony Wallace at one point said that Abbott could “stick his plebiscite where the sun don’t shine.”

The issue of the timing of a plebiscite or a referendum is likely to come up in a cabinet meeting this afternoon. Many Liberals would like the issue to be sorted sooner rather than later, with Communications Minister Malcolm Turnbull and Attorney-General George Brandis indicating it should be conducted at the same time as the next election.

After introducing the cross-party legislation this morning in the House of Representatives, Entsch was asked when he would like to see the matter dealt with.

I notice that a recent survey ( I think by the Marriage Alliance) shows a 70% vote for a plebiscite. I think the question was along the lines should the people decide or the pollies.

Perhaps there should be two questions in the next survey

1) Do you want to waste $80 million that could be spent on schools health etc on a plebiscite rather than having our elected officials do the task they were contracted and well paid for?

2) Do you support a simple amendment of a few words to Marriage act so that same sex adults can marry?