Which pollies fly the most? ... drink-air traffic controlling? ... went to a garden party to reminisce with old friends ...

Leaving on a jet plane. Our politicians’ flying habits have inspired many headlines over the last two months. Details such as where they go, how they get there, who goes with them and how much they spend have all been raked over with a fine-tooth comb. Now, procurement agency Acquire Procurement Services has created a graphic representation of all the domestic scheduled flights taken by politicians between July 1 and December 31 last year. Called Poli Flight, the platform allows users to look at individual politicians, airports and routes and even ranks politicians on cost and distance travelled.

West Australian Greens Senator Rachel Siewert comes out on top, with $77,877 worth of flights in six months covering 177,428 kilometers on 75 flights. Mathias Cormann comes in second with $76,521 worth of flights over 168,249 — it’s no surprise the big spenders are Western Australians. Of course if international flights were included we’d be looking at some very different names. The project only covers non-chartered flights — so we don’t get to see Bronwyn Bishop fly from Melbourne to Geelong in her chopper, but it does show that overall $5.9 million was spent by our pollies on domestic commercial flights in six months — almost a million dollars a month. The Sydney-to-Canberra corridor accounted for almost 1500 of our pollies’ flights 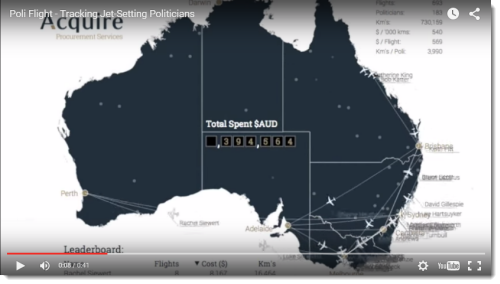 Hobart air traffic. We hear from a tipster that things have been a bit wobbly at Hobart’s air traffic control recently:

“Recently in Hobart an Air Traffic Controller was caught and charged with drink driving on the way to a early morning shift in Hobart control tower. The flying public should be worried that if he did arrive at work that morning he would have been controlling and separating aircraft while legally drunk.”

We put that to Airservices Australia, asking what restrictions there were for the blood-alcohol level of air traffic controllers, and received this response:

“A member of staff has been stood down from duty while we investigate a matter in Hobart on Saturday, 25 July. It would not be appropriate to comment further while this matter is investigated. Public safety is our first priority and we are following established procedures to ensure safety and to appropriately manage staff welfare.”

Paul Fletcher’s garden party. How do you raise funds when there are no royal commissioners available? Hold a garden party, like member for Bradfield Paul Fletcher and Foreign Minister Julie Bishop will next month. The Bradfield garden party will take place at a private home in Wahroonga, where we are sure the Sydney weather will put on a great show. 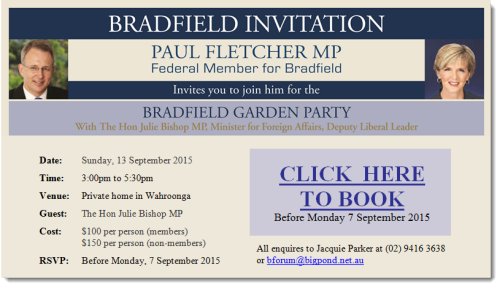 Bananas, in pyjamas, ruling the country. While there have been cuts throughout the public service, it sounds like some of our senior mandarins have been putting their minds towards other ways to make some cash. At a public lecture by Finance Secretary Jane Halton at Parliament House on Friday on the public sector management reforms, Rosemary Laing, Clerk of the Senate, asked: “It’s always been my dream to come up with a parliamentary equivalent, a merchandising equivalent, of B1 and B2. Now, under PGPA (Public Governance, Performance and Accountability Act) would I be allowed to keep the profits?”

Halton replied: “We do have a variety of policies, don’t we, about cost recovery and then there’s a negotiation to be had. So it depends on how successful [the Parliamentary equivalent of] B1 and B2 are. If they’re incredibly successful, we may have to take a dividend, Rosemary.”

We wonder who would be the parliamentary B1 and B2? Tony Abbott and Christopher Pyne?

Stop the cones. Speaking of merchandise, a tipster has informed us that a company that specialises in smoking paraphernalia has released a new product, which it calls TonyBong: 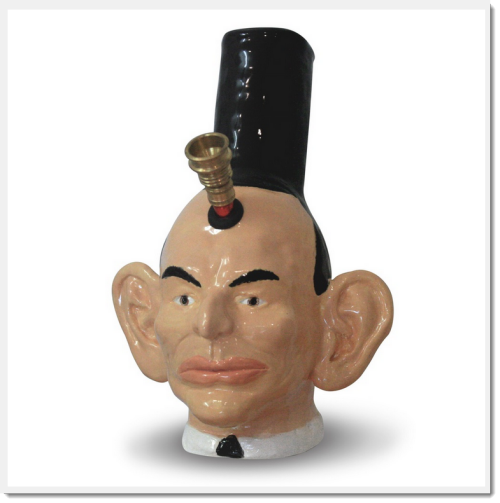 It’s not the first time that the Prime Minister’s face has been added to a questionable product, with Tony Abbott toilet paper, condoms, underwear and dartboards already available to be purchased online. While Ms Tips is waiting for a line of Killing Season merchandise, it seems that Abbott is not the first one to be imagined in such a way — John Howard’s face also made it to a bong.

The only truly effective involvement by the PM is reducing drug use. All his other involvements are merely for persona aggrandisement, distraction from the issue he should get involved in , to hide that he is not up to the job and to give the impression of leadership.