The rich irony of crying ‘lawfare’ while surrendering our sovereignty

The government is complaining about "lawfare" against mining projects while inviting multinationals to sue it and score generous payouts. 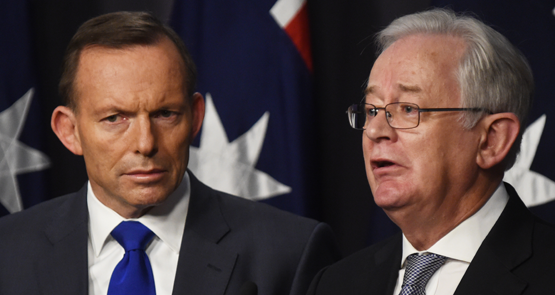 Although there may not be a coherent economic strategy from the government, it is working to establish an alternative narrative to allocate blame for damaging the economy on conservation and farming groups. It’s the “lawfare” narrative.

Andrew Robb was the first to employ the word in relation to the Carmichael coal mining project last week. On the weekend Attorney-General George Brandis — echoing Greg Hunt, who flagged changes to Environment Protection and Biodiversity Conservation Act to prevent groups from challenging project approvals, or perhaps simply give himself retrospective immunity when he’s broken the law — also referred to “lawfare” and went further, invoking the oxymoronic term “vigilante litigation”. Presumably the label “legal terrorism” can’t be far away from the collective lips of the government.

Brandis opined that “we should keep political disputes in the Parliament and leave the courts to resolve legitimate, bona fide legal disputes.’’ The problem is, the challenge to the approval of the Carmichael project was indeed a bona fide legal dispute, because the government broke the law when it approved the project without considering what it is required by law to consider. That’s why the government pre-emptively withdrew the approval itself before the court could rule on it. If there was any “lawfare” going on, Hunt surrendered before a shot was fired.

Brandis went on to  say the economic consequences of the Carmichael decision would be “devastating”, the result of “people who are ­determined to wipe out Queensland’s biggest industry, the coal industry’’. The problem is, the project will provide just 1400 permanent jobs and at current and projected coal prices is simply unviable. It won’t be lawfare that kills Carmichael, it will be the price of coal.

By way of context for the claim about “lawfare”, the EPBC Act is actually a creation of the Howard government. There’s been long-term criticism, including from the Australian National Audit Office, that the act is too weak and poorly enforced, rather than being too strong. In 2009, public service veteran Allan Hawke conducted a lengthy and detailed review of the EPBC and recommended that some barriers to public interest litigation actually be reduced, not raised. “Public interest litigation is one of the most significant means of enforcing environmental law,” Hawke concluded, “and in enhancing the transparency, integrity and rigour of government decision-making about activities which impact on the environment. Often the cases are ‘test cases’, concerning questions of law that have not previously been considered judicially. Because public interest litigation plays this role, it is important that the law facilitate it.” The Rudd government, however, disagreed with Hawke’s recommendations. Now the Abbott government wants to create more barriers to public interest litigation or kill it altogether.

The deep irony of this government — and especially Andrew Robb — complaining about lawfare is that lawfare is exactly what the government is enabling via its acquiescence to US demands for a investor-state dispute settlement mechanism in the Trans-Pacific Partnership, which would give multinational corporations the ability to sue the Australian government for any policy change that affected their profits.

As Crikey has previously explained, ISDS does not involve the use of courts, but artificial “arbitration fora” run by hand-picked lawyers who are not bound by precedent or existing jurisprudence, meaning every new case of “private interest litigation” against a government is in effect a lottery that could deliver some lucky company, and its litigation funders, hundreds of millions of dollars.

But the irony goes further. One of the most widespread criticisms of ISDS is that costs don’t follow the result — rather, each side has to pay its own costs, meaning that even if a corporation brings a vexatious or frivolous case and loses, the government it has sued can’t claim its legal costs against the other litigant, leaving it out of pocket by, on average, US$8 million a case — and often far more.

When it comes to “lawfare”, not all battlefields are even.

“Lawfare” :- the art of concentrating on one piece of a jig-saw puzzle rather than the bigger picture?

If our Govt does not respect the law ( or even follow it or respect it) then on what basis is it a legitimate Govt?

As for our “Environment Minister” Greg “Stark” Hunt … having read Ben Elton’s book?

Would be interested to know exactly how many “vigilante litigants” have actually been successful in bringing a case – I imagine very few. And even fewer who have been successful.

On a side note – interesting that the EPBC Act has only denied approval for 18 out of 806 projects since 2000 – not exactly the sign of an overly-zealous piece of legislation: http://www.theguardian.com/environment/2015/aug/12/australia-has-denied-environmental-approval-to-just-11-projects-since-2000

No one doubts the Crikey Land Denizens READ books, but when it comes to whether they UNDERSTAND what they read, the Jury came back a long time ago, and sadly the answer is “No.
Perhaps fortunately for many of Crikey’s more fervent acolytes, it seems likely that state of affairs will change.