There now isn't any good reason for the pro-gay marriage campaign not to get behind a "Plebiscite Now" push. 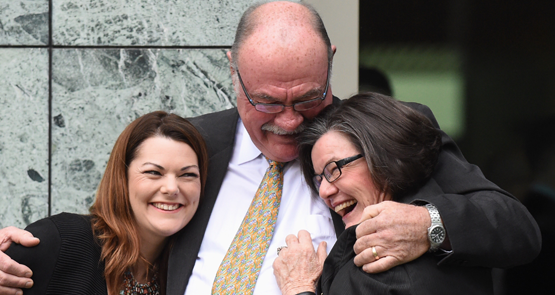 Tony Abbott is being alternately praised and cursed for shunting the same-sex marriage issue to a public vote — whether referendum or plebiscite. The jubilation on the part of those who want it delayed at all costs would seem to be wishful thinking. The bizarre suspension of whatever the vote would be until next term simply emphasises the growing public apprehension of this government — that it is deceitful, sly and holds the intelligence of the public in contempt.

That is, of course, Mr Tony’s doing. The man is not merely willing to play fast and loose to get what he wants, he is addicted to it. He leaks against his own cabinet on issues such as removing citizenship, he stacks against his own party room on an issue like same-sex marriage. There is a strong sense that he can’t help himself but do these things. Conservative Catholicism, and especially the seminary, has given him two things: a belief that the Christian order is being threatened by nihilistic secularism, and a confidence that the doctrine of Original Sin gives you carte blanche to lie and scheme in the service of a higher cause.

Genuine liberals in the Coalition appear willing to be dragged along this path, even though Abbott now offers no advantage with the voters — and indeed, may be less popular than any post-spill leader would be, memories of Rudd/Gillard or no. Well, rather you than us. At some point, circumspection becomes simple cowardice, and that is not a good way to go out backwards, as seems increasingly likely.

But should Mr Tony stay, what then for same-sex marriage? From those campaigning for it, there was initial frustration that a parliamentary vote had been forestalled. But over the weekend, it started to become clear to people that this was a gift, not a problem. If there really is a solid majority for same-sex marriage out there, then a plebiscite would give it a legitimacy that could not be questioned.

Abbott’s move to a plebiscite had more than one purpose, but one was to jam up the pro-gay marriage movement, based on the last triumph — that of Ireland, where same-sex marriage was achieved by a referendum on a constitutional amendment. That referendum was a plebiscite as well, a straight majority win on a “yes” or “no” question. The support given to it by the pro-gay marriage movement across the world — as the first popular achievement of same-sex marriage — had a patronising touch about it, at times. Priest-ridden old Ireland, lookatem, etc, etc, became plucky old Ireland, a modern people staring down the old establishment. So to disregard a plebiscite here is not a good look, no matter how it came about.

In fact the pro-gay marriage movement should not only get behind a plebiscite, they should demand one in this term of Parliament. There’s no reason why it couldn’t be done in November — organising one isn’t rocket science, and the question to put would be straightforward. But if not November, March would be the go. Of course, to actually have a plebiscite requires a majority in Parliament, which isn’t there. But Abbott has opened the gate for the campaign for same-sex marriage to become a campaign for a plebiscite.

This would appear to be a massive own goal for the conservative right. For years, their insistence has been that the same-sex marriage push is a cause manufactured by the elites to be foisted on the wider population. Leaks from the 191-hour party room meeting suggested that some cultural rightists, such as Senator Concetta Fierravanti-Wells, argued that polling showing 72% support for same-sex marriage was soft and disguised a silent majority. That’s been rubbished by people such as political strategist and pollster Mark Textor. And they’d have to be not merely soft but marshmallow to disguise a secret trad-marriage majority. In such calls one hears the same wistful thinking as was present in the 2012 US election — that the polls were skewed, and Obama could not possibly have a majority. It is the old world painfully adjusting to the new reality.

Now things have been reversed. The conservative right are trying to delay and frustrate the verdict of the people. The pro-gay marriage campaign has become a democratic campaign. Introducing the entirely new element of a plebiscite — presumably with a view to turning it into referendum, to be defeated by Queensland, Western Australia and Tasmania — has given the pro-gay marriage campaign an opportunity to make a final fusion of their cause with the mainstream. It’s a gift and should be regarded as such.

There now isn’t any good reason for the pro-gay marriage campaign not to get behind a “Plebiscite Now” push. Yes, the easier path would be a conscience vote by all parties. But the rationale for the conscience vote underlines the rationale for a plebiscite. The issue of marriage is an “incommensurable” one — it doesn’t map onto any simple left-right, or even liberal-conservative division. Cute phrases like “marriage equality” don’t disguise the fact that redefining the essence of marriage is a major cultural event. Marriage predates the state and just about everything else in cultures.

For those who see same-sex marriage as the flagship of progressivism, a plebiscite in a country like Australia would be a major milestone. Ireland is a country where religious and secular forces have fought themselves to a draw; abortion remains near-totally illegal, divorce is difficult, the Church retains substantial control over education. There was no other path to same-sex marriage but a popular vote. In Australia, a secular irreligious country, it is not politically necessary — and, in that respect, it would serve as an extra gazumping to the conservative forces. The “silent majority” model would be instantly dispelled; a victory would entirely re-situate cultural politics in this country.

Personally, I’ve got no dog in this fight. I don’t think same-sex marriage — as opposed to fully equal civil unions — means anything much, least of all a genuinely progressive or radical cause. But one is always interested to see the conservative forces suffer a fresh blow. It might also force some of them to dig out some better arguments than the people-will-group-marry-fuschias sort of thing, and to make clear some of the notions that would underpin a conservative case for marriage.

The difficulty for them is that once you’ve talked about traditional marriage in material terms — that, focused on procreation, it is the means by which cultures anchor themselves in nature, and put the miracle of life at their centre — you’re halfway down the road towards abolishing it. Indeed, once same-sex marriage becomes thinkable by a proportion of the population, it is halfway on the way to being won.

So what do the pro-gay marriage crowd have to fear? I suspect many understand that the right are well organised at their grassroots, while the pro-gay marriage movement has been far more sporadic. Much of the initial push, years ago, was done by the Democratic Socialist Party, the most cultural-social-movement of the Trot groups, and organised old-skool, i.e. with people willing to work hard to make change. Without a core force to push this forward during a campaign, the right could well steal a surprise victory, in a vote in which getting the turnout would be as vital as making the argument.

Of course, the easiest solution would be a new Labor government and a free vote in the house. But a “Plebiscite Now” campaign would assist that too, especially as the Abbott government will use what remains of the credibility of the Royal Commission into Trade Union Governance and Corruption to paint Labor as a bunch of gangsters which, heh, of course they aren’t, I was never there, heard nothing. Having a constant reminder of Abbott’s duplicity in the lead-up to the election would add a few points to the splendidly developing loathing of him that is currently underway. Whether conceived as an offensive or defensive strategy, there really isn’t any alternative but to demand a plebiscite, now.

Yeah……let’s waste $80-$150M right now plus the effective waste of having a Parliament not doing what it was put into place to do.

As somebody has pointed out the Greeks were able to organise a vote on a few weeks. The fact that the Abbott Govt can’t just shows how incompetent they are.

Normally they are in a hurry to waste money

Vote on it and get on with trying to run the country. FFS how hard is it?

Can we also have a pleb next time the US wants us to join in one of their oil wars – after all the people have a right to decide.

Guy, doesn’t it worry you that the campaign for the plebiscite will be ugly and divisive? We’ll be handing every homophobe in the country a soapbox and a megaphone from which they can spew forth their hatred of gay people as ‘unnatural’, ‘sick’, ‘perverted’, etc etc. for months, all in the name ‘public debate’. All while vulnerable gay teenagers, who already commit suicide at 5-6 times the rate of their peers, watch and listen and absorb the message that a significant minority of people, led by the Prime Minister, do not see them as fellow human beings. How many kids will have to die so that Tony Abbott can get out of a tight political fix?