Will the real Mark Latham please stand up? And other media tidbits of the day.

Chasing Latham. A quick catch-up for those who don’t spend their weekends glued to Twitter. BuzzFeed’s new political editor Mark Di Stefano on Friday alleged that a Twitter account entitled “Real Mark Latham” had been sending abuse to prominent Australian women, including Australian of the Year Rosie Batty and transgender serving defence force member and cricket writer Catherine McGregor (referring to her as “he/she”). Latham has also mentioned both women in his Australian Financial Review columns, leading BuzzFeed to speculate he was the one behind the account.

This morning, BuzzFeed used Twitter’s “find your friends” function to confirm the email address linked to the account is one Latham has sometimes put at the bottom of his AFR columns. BuzzFeed says it’s been trying all weekend to get comment out of Latham and Fairfax — Crikey also tried to get onto both parties this morning. As Crikey went to deadline, the account tweeted that “poor Latho” had been sacked and was now retiring to the Mount Hunter lodge for a rump stake. The account implored followers to “Maintain The Page”. Confirmation out of Fairfax was not, as Crikey reached deadline, forthcoming.

While Latham is lying low, Crikey has confirmed he’s still due to appear next Saturday at the Melbourne Writers Festival, in conversation with Jonathan Green on the topic “Politicians as Journalists”. Green has said he’ll ask Latham about the account. Festival CEO Lisa Dempster confirmed to Crikey that recent controversy aside, the event is going ahead. “Mark Latham’s appearance at the festival will be an opportunity to engage with him on a variety of subjects around the theme of politicians as journalists.” No doubt it’ll be a packed house.

In November, Spectator Australia pulled its regular Latham column, according to the Oz. He described it at the time as a “disgraceful act of censorship”. It was reported that the column had been pulled after he had a go at Oz media editor Sharri Markson. Apparently, Spectator editor Rowan Dean wanted Latham to focus on more deserving targets, like Clive Palmer. — Myriam Robin

Redoing Media Diary. Speaking of Markson, today in the Oz‘s Media Diary came word of a difference of opinion between Seven chief Tim Worner and his predecessor (now consultant to the network) David Leckie. That won’t be surprising to Crikey readers — we covered it ourselves last week — but the Oz‘s report went a little further, saying Leckie could well replace Worner at Seven, as Worner wants to spend “more time with his family”, according to “close friends”. 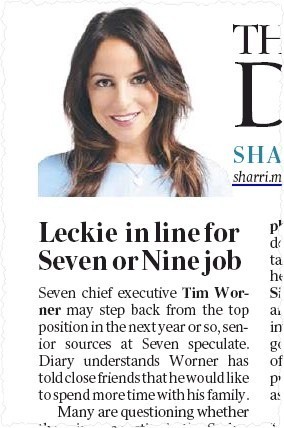 It wasn’t a great day for it, as this morning’s Australian Financial Review has an exclusive on Worner extending his contract to 2018. Suggestions that he’s looking to step down today look, well, a little unlikely (at best). Evidently someone at the Oz thought so too, as here’s how the story was changed online this morning …

There’s no note saying the story has been updated. Given today’s Fin scoop undermines the opening of the whole column, surely one was warranted? No doubt it’ll be in the paper tomorrow — we wait with bated breath … — Myriam Robin

Lunch watch. By the by, it’s the first Media Diary written by Markson in some time — and, oh, how we’ve missed her! Today’s column had a dozen paragraphs on Rupert Murdoch’s lunch decisions in Sydney, and informs us that the service at Catalina restaurant for the Sun King’s Tuesday lunch was pretty average (“some guests left before their mains were served and dessert did not arrive in time for almost all attendees”). The last time such a slight was inflicted on the Sun King and his court was back at the 2000 Sydney Olympics when the transport back to the CBD failed to arrive on time after the opening ceremony. That was a career-ender for one or two folk. But things were repaired by Lachie and Sarah Murdoch who hosted the News Corp board and their partners to “an elegant dinner at their new Bellevue Hill home.”

“After four years of renovations, the houses is said to be stunning …” we are told. Markson’s review of the Murdoch’s progress continued “The dinner was beautiful and an improvement on lunch at Catalina … The fresh lobster had been caught by a friend of Lachlan from NSW waters. It was exquisite and went down a treat with the board, as did the NSW lamb.”

To continue from the Diary:

“Rupert ordered the barramundi, a healthier option on the menu. Murdoch father and son are said to be health conscious … Most ate steak for their mains and Lachlan and Devine shared the roast chicken. At the lunch Sheridan spoke about his new book, When We Were foolish, and the coverage he had received on the ABC. The awful Fairfax results, released that day, were discussed.”

But Fairfax’s results were better than News Corp’s, at least when it comes to Australian newspapers. The Fairfax figures weren’t brilliant, but they weren’t as miserable as they were a year or more ago. And remember, News Corp’s chief beancounter Bedi Singh had told last week’s profit briefing that the News Corp Australian papers cited a 23% fall in ad revenues in the fourth quarter (in US dollar terms) and an 8% drop in local currency (Australian dollar) terms. That’s a nasty ouch. Enough to force the staff back to Australian wine for the next function! — Glenn Dyer

Your correspondent feared Fairfax’s awful clickbait habit had made it to its newspapers too, but now thinks it might be some sort of meta-comment about recent criticisms. The article the teaser refers to is about how to avoid spoilers in the age of streaming services. — Myriam Robin

Sorry, Foxtel shareholders. A bit of belt tightening at Foxtel amid signs that times are a bit tougher for the pay TV giant, controlled by the Murdoch clan’s News Corp and Telstra. As it spends on the Presto streaming joint venture with Seven West Media and finances its move to take de facto control of the Ten Network, as well as meeting the extra costs of the IQ3 PVR debacle, Foxtel’s shareholders key distribution was cut in the year to June to a three-year low.

But there was no reduction in the other way News and Telstra have constructed to pay themselves tax-free distributions from Foxtel, thanks to the partners’ loan of US$902.5 million (which was taken on as part of the Austar and Cons Media acquisition financing). The two partners received a total of US$108.3 million in interest payments on the loan (equal to a very fat 11.9%), or US$54.15 million each. That took the total distributions from Foxtel to each partner to US$179 million, down 18.2% from the US$219 million in 2013-14.

The other thing of interest about Foxtel not acknowledged by News is the inclusion of subscribers to its Presto streaming service into its subscriber growth figures for the year of 230,000 for the year and 84,000 for the fourth quarter. Presto is a joint venture with Seven West Media, and we have no way of knowing what sort of services they buy from Foxtel. We don’t also know whether these figures including full paying Presto subscribers, or also include people on the free month’s trial. That’s a very rubbery accounting of subscriber growth during the year. — Glenn Dyer

“Diary understands” – now there’s a foxy moron.
And Dean censoring his writers – rather than embarrass any of the sacred cows on his side of the fence – there’s a surprise?

Re: Sharri Markson’s ramblings.
Wasn’t there something about John Howard interviewing Rupert Murdoch for the ABC in that column?
Notice that you didn’t think it important enough to comment on. So much for trash on the ABC – going from bad to worse!!!

Retiring for a “rump stake” – that would be painful & unusual.