How could Dyson Heydon possibly have know the lecture he was to give was a fundraiser for the Liberals? Let's start with the numerous emails he replied to that said so ... 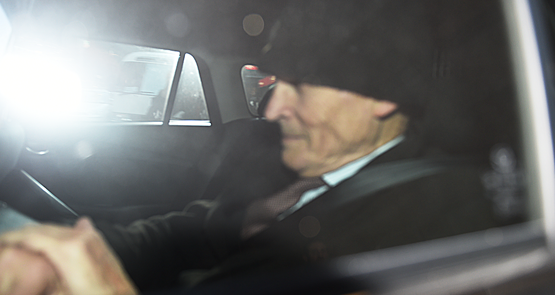 Former High Court Justice Dyson Heydon this morning claimed he had overlooked initial emails stating that the annual Sir Garfield Barwick Address he had agreed to give was a Liberal Party event, despite several emails mentioning the party’s association with the event.

Heydon, currently overseeing the Royal Commission into Trade Union Corruption, is facing pressure to resign his role after Fairfax revealed last week that Heydon would be delivering the address later this month.

Emails released last week initially indicated Heydon had pulled out of the address on the day the story broke — but before publication — because the dinner event could be seen to be a party political event. The government argues it is not a fundraiser because at $80 a head, it isn’t raising much in the way of funds for the New South Wales branch of the Liberal Party.

The Australian Council of Trade Unions is seeking to have Heydon removed from the commission and today sought other emails related to Heydon’s decision to give the lecture. This morning Heydon argued he had “overlooked the connection between the person or persons organising the event and the Liberal Party of Australia” in a March 2015 confirmation email. Heydon agreed to speak in April 2014, at which time the royal commission was expected to finish up in December 2014. The commission is now due to report in December 2015.

The April 2014 email reveals a number of mentions of the Liberal Party’s association with the event.

“I am chair of one of the lawyer branches of the Liberal Party NSW Division,” the third paragraph of Gregory Burton’s email states. “Although we are formally a branch of the party, our aim is to be a liberal-minded ‘bridge’ to the profession rather than overtly party-political (although we trust we show the party in a favourable light!)”.

The email goes on to state that Attorney-General George Brandis and former prime minister John Howard have given the address in the past.

Heydon began scoping topics of discussion for the speech in March this year. The event will be held in August, and he wanted to give the address around the topics of “the judicial stature of Chief Justice Barwick  viewed in the modern perspective”.

In June, after the date had been settled, Burton sent Heydon a copy of the “save the date” invitation. The subject of the email started with “FW: Liberal Party of Australia (NSW Division)-Lawyers’ Branch and Legal Policy Branch”. Heydon has said he did not see the attachment to the email, which includes a prominent logo for the Liberal Party. 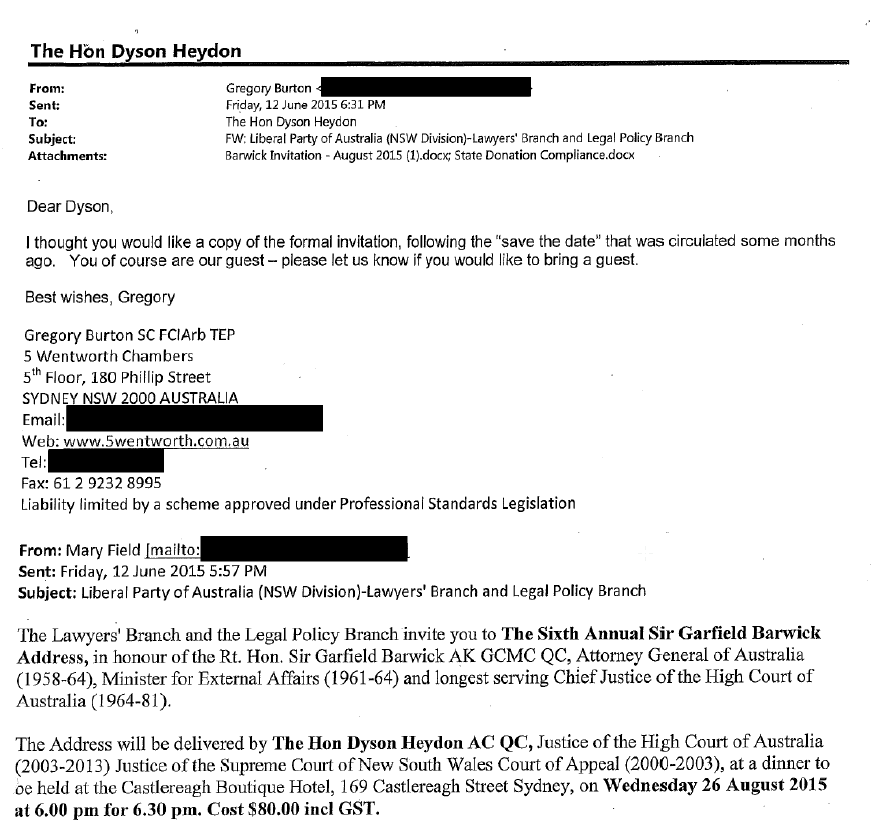 The event invite also allows for people unable to attend the dinner to make a donation to the Liberal Party.

Heydon is expected to address the issue at a hearing of the commission at 4pm today. The ACTU has written to the Prime Minister calling for Heydon to be sacked. In the meantime, Labor is using question time to put pressure on the federal government to sack Heydon from the commission.

Does anyone know if the Hon. is a member of the Liberal Party? This is one line of questioning that seems not have been pursued yet needs to be asked.

The bar is low here. Even if Heydon had no idea of the link with the Liberal Party — which, more and more, seems to strain credulity — by his own standards he should stand down because of the perception of partiality. You’ve talked the talk, Dyson, it’s time to walk the walk.

Didn’t Brandis get an invite and declined, due to workload. What did Brandis think when he saw who the guest speaker would be. “Oh look, it’s my man!”

Dyson Heydon is, not to put too fine a point on it, an unmitigated liar. Am I seriously being asked to believe this organisation-had it been held by a fundamentalist pro-Marxist Party, with an address in Lubyanka prison, Dyson Heydon would have turned up to deliver the evening’s entertainment? Give over Mr Heydon.

Dyson Heydon is, not to put too fine a point on it, a questionable evader of the truth. Am I seriously being asked to believe this organisation-had it been held by a fundamentalist pro-Marxist Party, with an address in Lubyanka prison, Dyson Heydon would have turned up to deliver the evening’s entertainment? Give over Mr Heydon.