Most Australian newspapers continue to bleed readers, but the weekend edition of Fairfax's business title has held its ground.

The quarterly Audit Bureau newspaper circulation figures have been a uniform sea of red for several years now. But this time, there’s something surprising. The Australian Financial Review Weekend  appears to have defied expectations of its demise, posting a 1% year-on-year increase in circulation in an era where the best performers have experienced small declines.

The conventional wisdom is that given the AFR owes much of its circulation to businesses looking to impress their clients and secure a tax write-off, there’s little need for a weekend edition when people are relaxing at home. But the AFR Weekend now sells nearly 5000 more copies than its weekday edition (circulation 57,243, down 6.5%), with a circulation of 62,643 — which is 600 more copies than it was a year ago.

Under youngish editor Matthew Drummond, the paper has prioritised quirky colour stories and features to try to differentiate itself from its more straight-laced Monday-to-Friday edition.

The slight boost in circulation was helped along by the Weekend AFR increasing the number of discounted copies it gives airlines. Without the average 1139 extra daily copies given to airlines in the past financial year, circulation would have declined 0.9%. The paper gave hotels 164 fewer copies each day, but this was eclipsed by the rise in airline copies. Still, a 0.9% circulation fall is an impressive result in this media climate.

The Weekend Australian posted a 3% decline in circulation — the good performances of both papers suggests there may still be an appetite for high-brow national weekend papers.

The Sunday Telegraph circulation dropped 9.9%, or 50,000 copies, year-on-year — though it still has the highest daily circulation of any newspaper in the country. Fairfax cross-town rival the Sun-Herald lost 13.9% of its circulation. In Melbourne, the Sunday Age went down  8.8% — the Sunday Herald Sun lost 8.6%.

Saturday papers fared about the same as the Sunday ones. Sydney’s Saturday Daily Telegraph has less than half the circulation of its Sunday edition, but it managed to hold on a bit better — it lost 7.9% if its circulations, as compared to the Saturday Sydney Morning Herald‘s 9.4%. In Melbourne, The Saturday Age was down 7.3% — less than the Saturday Herald Sun’s 7.8% decline. Perhaps the only significant aberration from this trend was the Saturday West Australian — down just 2%. 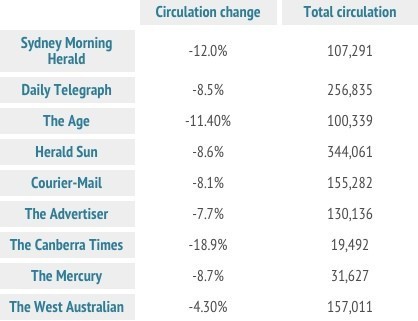 The Monday-to-Friday circulations of the major metropolitan papers

Overall, circulations declines have eased across the board since the June 2013 catastrophe audit, when total circulations fell 11.02%. We’re now seeing slightly smaller falls of about 8.5% a year, with metropolitan papers continuing to suffer more than their national cousins, and Fairfax’s papers suffering the worst of all. Of course, papers can point to digital subscriptions as the future of revenue streams, and for the small number of papers that do disclose digital subscribers to the audit bureau, these are still growing. The Herald Sun had the best result this audit — growing digital subscribers by 18.5% — though it (and all of News Corp’s papers) remain a long way digitally behind Fairfax’s metros, the SMH and The Age.

Given the above article and the poor digital-media results of the major papers, I am genuinely interested to know how Crikey manages as well as it does, without revealing any trade secrets, of course. I get the impression you must be doing something very right.

It occurs to me that this information might aleady be out there, perhaps in some of Crikey’s own articles that celebrated various milestones. If so, I apologise for my lack of awareness and perhaps you’d be so good as to me, and others, in their direction.

Please continue with the great articles and the commercial success, or commericial viability at the very least.

As a lowly journalist I’m not privy to Crikey’s financials, but my impression has always been that Crikey really benefited from introducing an online paywall so early. We’ve had one for multiples longer than almost everyone else in the Aust media. And while we don’t have a massive subscriber base, and are certainly not rolling in riches, we’re also very tiny and lean – so we have far lower costs!

Thank you, Myriam, for the prompt response.