Parliament is not the place for your team spirit. Except when it is ... Spearsy v the parliamentary Sarjeant at Arms ... join the Green Army!

Scarves and attire. The Australian Diamonds will play Wales tonight in the semi-final of the Netball World Cup, but showing support for the team has sparked controversy in some corners of Parliament this week. It was a sea of green and gold scarves across the Coalition benches in the House of Representatives yesterday, but the same scarves were less than welcome in the Senate the morning before. 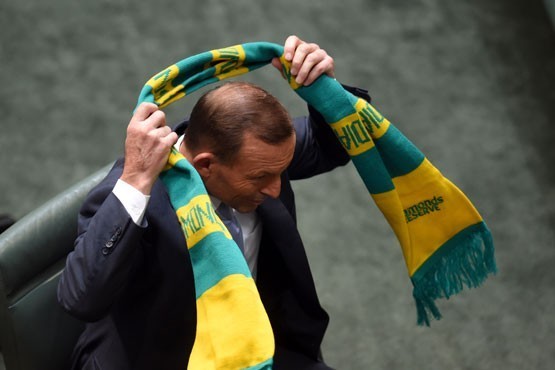 Senate president Stephen Parry had this warning for the Greens senators who had arrived on Wednesday wearing their scarves:

“Perhaps I could just address a matter that occurred at the commencement of the Senate this morning. I noticed that a number of senators were wearing sporting scarves, obviously celebrating a recent victory. I was very appreciative that the senators removed those scarves fairly soon after we commenced. But, just so that this does not escalate and we end up with people coming in of a Monday morning with their favourite football scarves on, I think we need to look at the appropriate dress standards in the chamber. I previously ruled that mining shirts cannot be worn. I have previously ruled that trophies cannot be displayed on desks. I am not going to make a definite ruling about what senators can and cannot wear into the chamber, but let’s just think about it before we do that. And let’s not let this escalate so that every second time something happens people wear something to identify that occasion. I am going to leave it to the discretion of senators. I do appreciate the Greens senators removing the scarves fairly swiftly. I will leave it at that, and I hope senators will exercise sound judgement. Thank you.”

Reporters and corridors. On Wednesday we reported that parliamentary press gallery reporters were annoyed that they had been asked to move on from outside the marathon party room meeting in which the Coalition decided not to change its position on same-sex marriage. Reporters tweeted that the orders to the Serjeant at Arms came from the Prime Minister’s Office, but when we asked the PMO why that order was made, we got crickets. In his role as press gallery president, Sky News political editor David Speers also followed up with the Serjeant at Arms to find out what the deal was, and received this reply from Deputy Serjeant at Arms at Arms James Catchpole, who encouraged him to share it with the press gallery:

“As you are aware, the Rules for Media Related Activity in Parliament House and its Precincts (the Media Rules) prohibit media related activity in the private corridors of the building (paragraph 4.6(f) of the Media Rules). Exceptions to this restriction may be negotiated prior to any ‘significant events’ after consultation between the Press Gallery and the Presiding Officers’ delegates (paragraph 5.8 of the Media Rules). However, I understand that you (Mr Speers) were advised by email at 3.00pm on the day by the Serjeant-at-Arms’ Office that there were no special media arrangements in place to cover the party room meeting.

A gathering  of media representatives in the corridor close to a party meeting in progress is reasonably characterised as media related activity under the Media Rules, regardless of whether the representatives were filming or seeking comments at that very moment. On this basis and without any special arrangements in place your colleagues were asked to move on.  In any event, anyone loitering around a party room during a meeting is routinely moved on by the Parliamentary Security Service as a security precaution, and it is expected that all parliamentary pass-holders, including media representatives, comply with these requirements.”

“Could you please explain why an unprecedented six hour party room meeting on gay marriage was not considered a ‘significant event’?  Who made this decision and on what basis?  As media representatives, we are required by our employers and the public to cover these things and we have absolutely no input on these decisions that deny us the ability to do our jobs.

Secondly, can you please explain what is now ‘reasonably characterised” as media related activity?  Does this prevent any group of journalists talking to anyone in any part of the building?  If three journalists are speaking to a politician or staffer in a corridor, is that now in breach of the rules?  I remind you MPs were happy to talk to the journalists on Tuesday night.

Thirdly, the suggestion this is a ‘security issue’ is frankly a long stretch.

Finally, could you please clarify the initial question as to whether the directive to move on the journalists came from the Prime Minister’s Office (as the Serjeant’s Office said on the night).  We have also been in discussion with the Prime Minister’s Office about this aspect and we need to ensure we can trust what we’re being told by the Serjeant’s Office.”

Over the past year bollards have been erected both in and outside parliament house, and have been criticised as a safety hazard by journalists. Armed AFP officers have also started patrolling the corridors of the gallery.

Green Army wants YOU. Prime Minister Tony Abbott visited a contingent of his Green Army in Queanbeyan on Wednesday to try to get some good press for the project, which is meant to be a big part of the government’s environmental policy. We wonder how popular the program actually is, though, as a tipster tells us that recruitment advertisements are popping up regularly on music-streaming service Spotify. The ads begin with a young man talking about how much he has learned from being a part of the Green Army and how much he enjoys the work, followed by a callout for people between the ages of 17 and 24 to sign up for the paid work. Of course there’s no mention that the rate of pay is below the minimum wage.

Unimelb boycott brewing? A tipster asks: “Which senior and highly influential Social and Political Sciences professor at the University of Melbourne is agitating to boycott the university over its murmurings on Israel/Palestine/Occupied territories?” Do you know more? Drop us a line.

When is a fundraiser not a fundraiser? A tipster has looked at the list of former speakers at the Sir Garfield Barwick Address and thinks it’s fairly obvious it’s a Liberal Party event:

Diamonds – That “typical exABC Leftie tow-rag” Sarah Henderson (sitting in Parliamentary camera shot to help make “Abbott’s Ladies Bits” look bigger than it is) on a point of order re Burke’s “prop” yesterday, from behind hers?