A debate about the merits of voluntary euthanasia filled Sydney Town Hall to capacity last night. 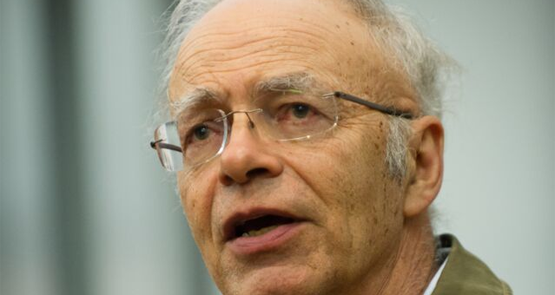 Debates about voluntary euthanasia are tricky; because it’s so emotive, everyone veers wildly off topic. While an eminent academic and speaker like Professor Peter Singer can stick to the subject at hand, just his presence on a podium seems to polarise an audience. At the Sydney Ideas debate last night, several people came to the microphone to shriek at him about abortion and disabled people and infanticide. One young woman, relating a story about her terminally ill brother, even asked Singer, “who are you to decide whether some lives are worth less than others?”, as if he were poised, needle in hand, ready to plunge it into her brother’s arm.

Luckily, the 69-year-old Australian philosopher and professor of bioethics at Princeton University is used to being harangued by people who have never read his writings. Patiently he explained to the interlocutors that this was not what they were there to debate and he would stick to the topic.

The debate, “Should Voluntary Euthanasia be Legalised?”, was hosted by the University of Sydney’s Sydney Ideas lecture program, and included the Archbishop of Sydney Anthony Fisher. The organiser, arts/law student Alessandro Cowley, was prompted to research the topic after his father’s brush with serious kidney disease a few years ago. After studying Singer’s writings in his ethics course, the president of the university’s Catholic Society was challenged to re-evaluate his views on euthanasia. Such was the interest in the forum that it had to be moved from the university’s Great Hall to the Sydney Town Hall, which was filled to its 2000-seat capacity.

Singer spoke first, saying that his definition of “voluntary euthanasia” included a situation where patients asked their doctors for a prescription for drugs that would cause them to die quickly and without distress. This is already legal in four states in the US, a few European countries and will soon be legal in Canada, owing to a recent Supreme Court decision.

It has never been legal in Australia, apart from a brief time in 1996-97 when the Northern Territory allowed it after lobbying from pro-euthanasia medico Philip Nitschke. This was later overturned by the federal government. Nitschke, incidentally, is a gift to the wider euthanasia movement in that his views are on the extreme end, making most everyone else look like a moderate.

Last night, Singer posed the question, “why do we normally consider killing an innocent person to be wrong and a crime? It’s because it’s a violation of the autonomy of the person killed.” But voluntary euthanasia supports this because it is the autonomous wish of the patient, he said, giving a person the right to die on their own terms.

The law against killing someone should not be absolute, he said, but voluntary euthanasia should apply only in the cases of terminal or irremediable illnesses.

“In those circumstances, to assist that person in ending his or her life is not morally wrong and in a free society should not be a crime.”

The Archbishop spoke next, and his views were somewhat predictable; you probably don’t get to step into Cardinal George Pell’s Italian loafers by being a radical.

“Doctors must never kill their patients,” he said, ignoring the fact that intentionally or accidentally, they do it all the time. In fact, one of the strongest arguments in favour of voluntary euthanasia is that it brings a procedure that is currently happening behind closed doors out into the open, where it can be monitored. Fisher then went into a long discussion of “bracket creep”, which made me think he’d been spending too much time with Chris Bowen. This is the “slippery slope” argument that says that if you start with the terminally ill, pretty soon you’ll be topping everyone who listens to Leonard Cohen (a mercy killing).

Fisher said that in Holland, people were applying for the procedure on the basis of “sight impairment, autism, tinnitus, dementia and loneliness”, although he offered no evidence for this assertion, adding in the example of someone who regretted a sex-change operation.

Singer, who is used to these arguments, pointed out that 5000 physician-assisted deaths in Holland a year was only 3% of the total. This meant that 97% of deaths did not involve voluntary euthanasia — hardly making it a kind of windmill-heavy Killing Fields. And the figures from Oregon (one of the US states that allows voluntary euthanasia) indicated that the patients were disproportionately white, highly educated and under 65, disproving the argument that it encouraged abuse of the elderly and vulnerable, he said. There’s overwhelming evidence to show that voluntary euthanasia “can be and has been safely practised without bracket creep”.

Like issues such as same-sex marriage and climate change, this does seem to be a topic on which the public has already made up its mind. Singer said on the weekend that “if you look at what’s happened in regards to same-sex marriage, there has been a huge shift in opinion. Why not this issue as well?” Over the past five years or so, polls have repeatedly shown the vast majority of Australians support voluntary euthanasia, with the figure hovering around 70%.

Anyway, Singer was great, and listening to him has made me want to go back and reread his groundbreaking works on animal liberation and the ethics of poverty. His latest book, The Most Good You Can Do: How Effective Altruism is Changing Ideas about Living Ethically, was selling like hotcakes last night at the book stand, with a long line of students waiting to have it signed.

The best moment of the night came at the end when the Bish went over to Singer and warmly shook his hand. Hand on his opponent’s shoulder, he gave the philosopher one of those “I forgive you for being wrong as I am a better man” looks for which the clergy is famous. Just for a second, the vegetarian, Green-voting pacifist shot him a look of pure Blue Steel. If looks could kill …

The debaters’ verdict: Rudd the winner, debating the loser

When taxes need to be raised to a sufficiently painful level to fund Australia’s ageing population the government will realise the practicality of voluntary euthanasia and legalise it. Always follow the money trail.

Thank you for this report, it is truly wonderful that there are people like Singer out there who are prepared to continue the campaign for this simple and vital reform, in the face of control-freak religious nutters and their misguided rantings.

A minor point: I thought I was pretty much aware of Nitschke’s views and I don’t find them extreme.

I think that it was misguided not to included an anti euthanasia activist who opposes it on non-religious grouds (as I myself do – and I am very familiar with Singer’s views on this issue) in this debate. The late Stella Young, for example, was both an atheist and an opponent of legalised euthanasia. As for the high number of Australians who say that they support it in opinion polls, I note that a referendum in Massachussets that was expected to vote in favour of Oregon style legislation did not do so after a well-organised awareness campaign by disability rights activists called “Second Thoughts”.

No one is asking the RWNJ religious crowd to succumb to VOLUNTARY euthanasia, so what’s their problem?
They should butt out and leave the rest of us to decide these issues for ourselves!
Perhaps we could add this question to the plebiscite list for the rAbbott…..!!