Media release: statement from the office of Dyson Heydon

A brief statement regarding the matter of Justice Dyson Heydon's connection to a Liberal Party fundraiser, as sent to writer and satirist Ben Pobjie. 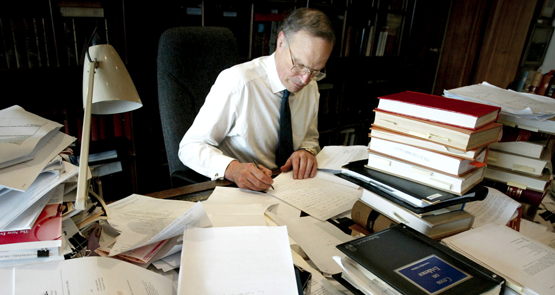 Mr Dyson Heydon would like to address the scurrilous allegations coming from the Labor Party and some sections of the media, that he has been in some way compromised in his duties as Royal Commissioner by the revelations of his inadvertent intentions to accidentally attend an unintentional event in the unforeseeable role of innocent guest speaker.

Justice Heydon, who was once a High Court Judge (which is a pretty big deal), would like to make it absolutely clear that when he accepted the invitation to give the Sir Garfield Barwick Address, he had no idea whatsoever what he had agreed to. As a busy jurist and much in-demand speaker, Justice Heydon does not have time to scrutinise, vet, or be aware of any basic facts about every invitation he receives. This is not unusual at all, and indeed just in the past month, Justice Heydon has given much-lauded speeches at more than a dozen events, the nature of which he is completely ignorant. Last year, he was the keynote speaker at Sexpo: he just doesn’t worry about these details.

In addition to this, it should be noted that there was no way for anyone to know that the Sir Garfield Barwick Address was a Liberal Party event, as the Liberal Party members who organise it keep this a closely guarded secret. Justice Heydon’s staff undertook all possible due diligence in this area, but besides the history of the event, the identity of the organisers, and the words used in the invitation, no connection to the Liberal Party was indicated, and all in the office would like to state that we are not mind readers.

Having said all this, Justice Heydon, who is quite elderly and thinks that should be taken into account, emphasises that his agreement to speak at this event was not in any way evidence of impartiality or bias. Justice Heydon has no affiliation with the Liberal Party, and in fact never even heard of the Liberal Party until this week. His accidental acceptance of speaking engagements from the party should not, Justice Heydon believes, be taken as evidence that he has any connection to it at all — as Justice Heydon’s father used to say, “A chicken may manage a McDonald’s, but that doesn’t make it a KFC”. Justice Heydon would appreciate the press gallery and assorted pundits keeping that principle in mind at this difficult time.

Most importantly, Justice Heydon would like to reaffirm that he believes he remains the best person to lead the Royal Commission into the thieving robber barons of the Australian trade union movement, in regards to whom he has always been completely unbiased. When it comes to the kleptomaniacal communists who have dedicated their worthless lives to the destruction of Australian business and the impoverishment of the Australian worker, Justice Heydon is steadfast in his conviction that he possesses the requisite combination of legal expertise and unfettered judgment to properly assess the facts surrounding the union movement’s assault on decency itself. Should he be replaced as Commission head, Justice Heydon fears a loss of the objectivity that is crucial to the proceedings.

In conclusion, Justice Heydon would like to apologise to anyone he has offended with his actions (which were fine, anyway), and reiterate that he had no reason to believe that the event he was asked to participate in was a party political event, and that it wasn’t a party political event anyway, and even if it were, it wasn’t much of a one. The Justice trusts that this will be an end to the matter.

It’s a tough, dirty job trying to satirize Dyson Heydon.
But someone’s got to do it. Well done Ben!

Perhaps Justice Heydon should have heeded the AFP caution of elderly Australians being duped into being drug mules….or perhaps the AFP should widen it to include the Liberal Party

Right now, the unswerving support of the PM would be taken by any clear-headed individual as a sign that they should rifle the stationery cupboard and head for the door.

I hope he won’t be too tied up that he can’t give his usual address to The Hellfire Club this Halloween!