The Tele, with its usual standard of journalistic excellence, photoshops the Deputy Leader of the Labor Party alongside terrorists. Plus other media tidbits of the day.

Digitally altered image. On the second page of today’s Daily Telegraph, here’s how the digital wizrads treated comments from the Labor Deputy that Australia’s main contribution to Syria should be humanitarian … 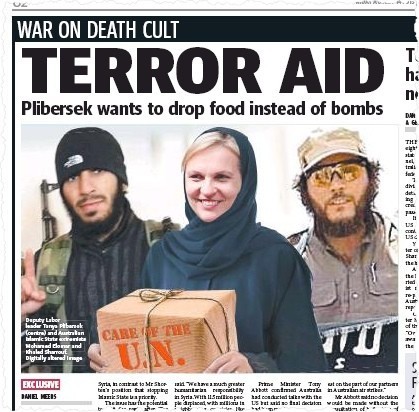 Lathaming latest. How’s Marky Mark doing this week? The Laird of Liverpool hit the jackpot this week when Marcia Langton told the Garma Festival that Abbott was bowing to “the tradies with their Eskies” in deciding not to fund an indigenous conference on recognition, rebroadcast on Sky News but nowhere else. Gahhhh, head-desk when one saw that in the Crikey office, where the newsfeed burbles through the day. Open goal for Latham, man of the people. Sure enough, in his AFR column this week, one stray classist comment by Langton has been taken as representing the views of all teh elitez. It also gave Latham a chance to join the it’s-not-racist crowd as regards the booing of Adam Goodes (whom Latham dragged into this). Booing Goodes is racist, but it is not done by any entire class of people. It’s a self-selecting miserable bunch of bastards who would rather amuse themselves by trying to mozz Goodes than they would watch a game of footy. Latham understands their resentment because he has a fair bit of it in his soul. That’s why he can’t acknowledge the racism that Goodes cops, while also attacking Langton’s snobbery. “The elite, which enjoys the luxury of high interests and cosmopolitan interests, has subdivided Australia …” writes the man who lives off taxpayer-funded super and writes book chapters on French Hegelian philosophers. Jesus. One thing we know. If he was watching Sky News on a Monday morning, the Laird of Liverpool has a lot of time on his hands. — Guy Rundle

Peak Guardian watch. Yes, it’s that time of the week when all the Engels-bearded young men and women in shiny US tenpin bowling team shirts in offices from Northcote to Newtown, to that one street in Brisbane, gather round the chart above the Chemex to see who got what in the sweep … yes, it’s Peak Guardian Ratio Friday! People clutch their tickets in anticipation. Drum roll, on the giant Rebana Ubi drum we bought back from that village stay in Sarawak … the number is … 0.425

Yes, a return to form. Judges were particularly impressed by Kristina Keneally’s “We need urgent action to prevent deaths of women and children” for urging something no one could disagree with (“Plague bad”), Keith Stewart on getting real about games designed by something arghhh gamergate whut don’t care, and Eleanor Robertson for “Dear Manchild, if you want me to look after you it’s time to pay up“, a fine example of the “note-stuck-to-fridge-with-pineapple-magnet-run-as-oped-piece”. Rhiannon Lucy Cosslett’s “I understand why an intern would live in a tent” was included for being indistinguishable from a Comment Is Weird header. Nell Frizzell’s piece on leg-shaving as political act has not been included because it is well-written, but coming after a piece on bikini-buying as a political act, well, don’t push it. The judges commented: “PGR did not hit the 0.5 mark due to the absence of Hadley Freeman, whose pieces rate automatic inclusion. See you in a fortnight!” — Guy Rundle

Magazines a disaster area … As far as magazines went, there were very few  success stories in the latest audit report. Food, wine, arts and crafts, celebrity, gardening and women’s general interest all produced the odd winner, but the results were, on the whole, bad for publishers like Pacific (owned by Seven West Media), Bauer (privately owned from Germany and NewsLife (part of News Corp Australia).

Fusion’s Steve Allen described it as a a “poor audit for magazines”, as weekly magazines’ adjusted circulation fell an average,of 5.62% while monthly magazines dropped an adjusted 11.69%.

Gardens and home improvement are off the agenda so far as buyers are concerned, Car mags lost ground. Food went sour. Even money and the making of it failed, with Money magazine reporting a 14% slide in sales. — Glenn Dyer

…  but satire sells. Meanwhile, in the UK, some magazines are doing far better. According to audit figures released overnight, the satirical magazine Private Eye is enjoying an unaccustomed success — sales are at a 29-year high and it is now the biggest-selling current affairs mag in Britain. The figures showed Eye’s sales lifted 4.6% to 228,264 a week in the six months to June from a year earlier.

Eye just pipped the UK edition of The Economist, whose circulation grew 1.9% to 227,914  in the six months to June.

Press Council targets ethnic press. The lack of ethnic publishers in the Press Council is a “glaring … inexcusable” gap in the body’s membership, new chair David Weisbrot told media in Sydney today, as he announced a major recruitment drive among Australia’s ethnic and multicultural publishers.

“People in those communities should have the same right as any other citizen to expect their news media to be accurate, fair and balanced,” he said.

The Press Council has translated its eight key standards into Chinese — it will begin by targeting Chinese publishers, followed by those in the Vietnamese, Filipino, Greek, Italian, Indian, Korean, Serbian, Turkish and Arabic communities. Australia has 300 multicultural newspapers and magazines, the Press Council believes.

Helen Sham-Ho, a former state member of the NSW Legislative Assembly (where she sat first with the Liberals and then as an independent), lauded the council’s decision to reach out to multicultural publishers. “This will not only benefit the multicultural press, but also the readers of these non-English-language publications,” she said. “The Press Council is to be congratulated for this multicultural policy initiative, an idea whose time has most definitely come given Australia’s current demographic make-up.”

The Press Council has in recent months been focussed on growing its membership. The Huffington Post Australia and the Daily Mail Australia are its newest members. — Myriam Robin

Now for what News Corp didn’t tell us. What else was in News’ fourth-quarter and financial-year reports on Thursday, and what did the staff megaphones at The Australian and other newspapers fail to pick up and retail to us readers this morning? First up The Sun in the UK is in trouble as ad revenues plunge. Australian ad revenues were again weak, especially in the fourth quarter, while Foxtel fudged its subscriber figures and slashed its distribution to News and Telstra to the lowest level in three years.

The annual report for News was filed with the US Securities and Exchange Commission and reveal details on the year’s performance not included in the profit statement yesterday (unlike the local filing for hated rival Fairfax Media, which issued a detailed set of figures and accounts yesterday). They reveal a cut in payments to Foxtel’s owners; the news that The Sun is losing $1 million or more a week in ad revenues; and the continuing drain on Australian papers from weak ad markets. News chief financial officer Bedi Singh revealed an 8% fall in ad revenues, in Aussie dollars from the Aussie papers in the June quarter. — Glenn Dyer

Video of the day. Fast Company with a supercut of Donald Trump’s ore outrageous comments … 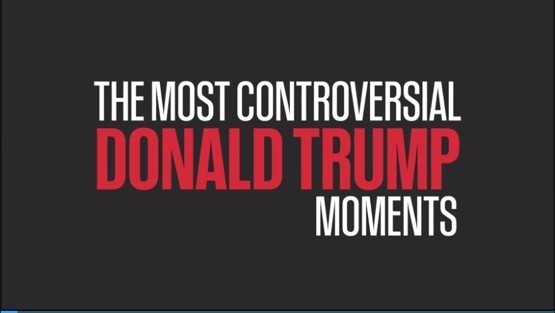 I’ve been a Private Eye reader/subscriber for a number of years – it continues to lampoon the the rich, famous and political without fear or favour and also does some damn fine investigative work as well.

Perhaps I should just anti up and subscribe to Private eye.

Is there no Australian equivalent?

Perhaps that should be ‘ante up’.

I play a bit of poker, should have got that right, still not sure. Oops.

The EYE also has an informative literary section, usually a good review plus lots of snippets.
I cannot think of an Oz euivalent unfortunately.