Australia has announced its new carbon emissions target, and most climate scientists say it's not nearly enough. Jennifer Morgan global director of the Climate Program at the World Resources Institute (WRI), explains why.

The federal government this week announced it would propose a goal of 26%-28% reduction in carbon emissions on 2005 levels by 2030 at the Paris climate change summit at the end of the year. Abbott has defended the target, which many say does not go far enough. Would a reduction of 28% be enough to prevent catastrophic climate change? The Climate Institute asked Jennifer Morgan of the World Resources Institute to explain.

Is Australia meeting its international obligations?

Australia is so vulnerable to climate change impacts, the government should make a serious offer to address the problem. With this rather meek offer, Australia is quite out of step with the rest of the world as they forge forward with clear targets to increase reliance on clean energy, become more efficient and reduce carbon pollution. It also means that other countries will have to do more to keep global average temperature below 2 degrees, and often those will be countries with much lower means to do so.

In the World Resources Institute’s analysis, how does Australia’s initial target compare to other developed countries like the United States and in the European Union?

President Barack Obama’s finalisation of the Clean Power Plan is an ambitious step to modernise the US economy while addressing both air pollution and climate change. Germany’s energy transformation has been a genuine success, with renewable energy at times powering the majority of the country’s grid and coal being phased out step by step. And this does not even take into account China, which has a target to grow non-fossil energy to 20GW by 2020 while working hard to cap coal.

These are the countries that already have a competitive advantage in the low-carbon economy. Australia is pursuing a risky pathway for its industries and its citizens. 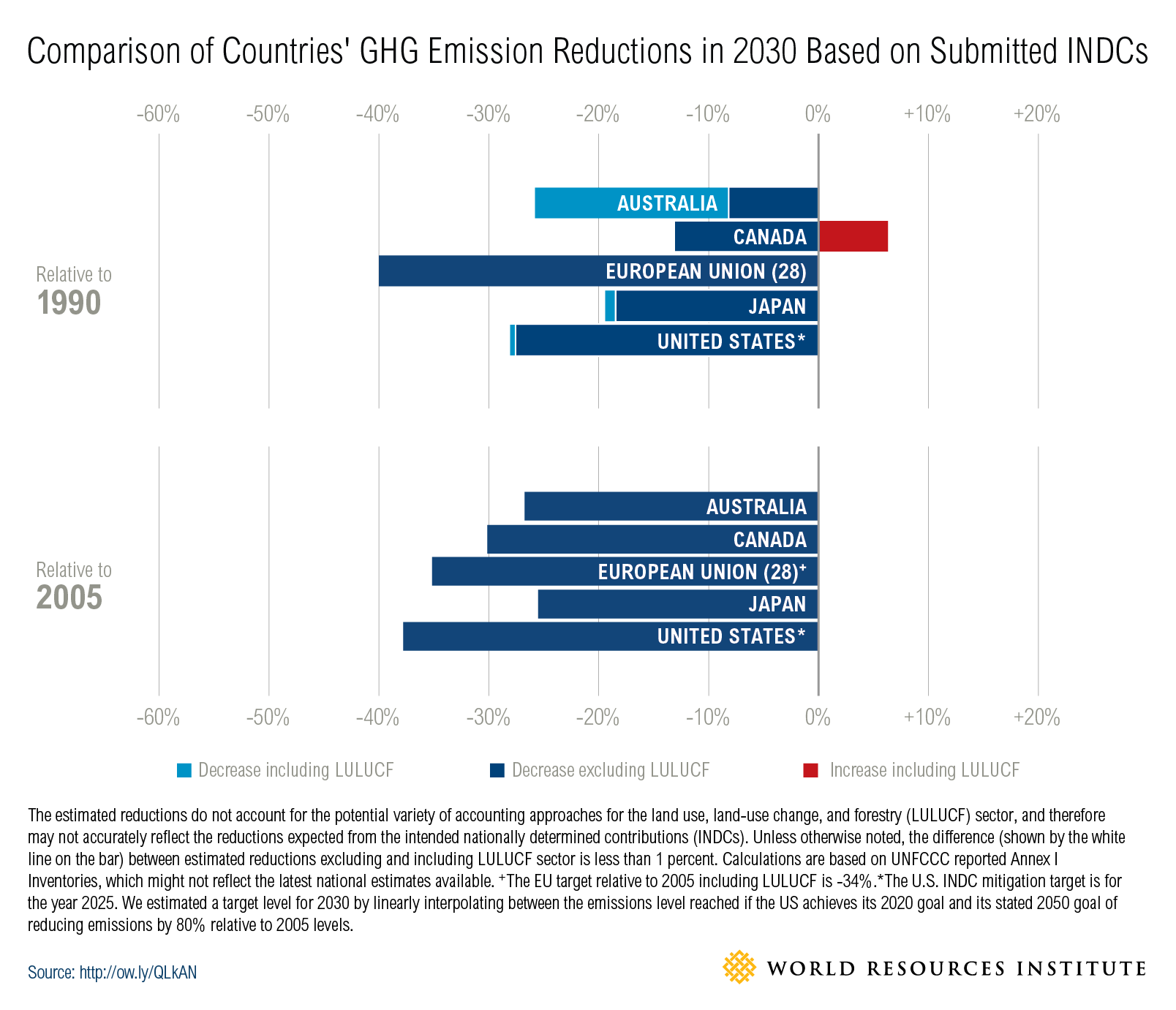 Does what Australia do matter internationally? If so, why?

Australia does matter internationally. It is a highly developed successful economy with icons like the Great Barrier Reef. People expect it to take responsible and smart action. It is also a major exporter. If Australia doesn’t go full-steam ahead in solving this problem, it allows others to take a slow path as well. We no longer have time for incremental and slow change. There is too much at stake for the people of Australia and the world. Think of all of the islands in the Pacific.

Will there be economic or diplomatic implications for Australia from the initial target it has announced?

The Paris Agreement is likely to be based on a mixture of international rules and norms and nationally determined commitments, with a more facilitative compliance system. From that perspective, there are few formal mechanisms in the agreement to address weak actions right now. The bigger issue, however, is that Australia seems to be banking on other countries also sticking to a high-carbon pathway so that it can continue to succeed in its high-resource export-driven economy.

However, as countries begin implementing their national strategies that include a shift away from high emissions energy to wind and solar, Australia could find itself ill-prepared. This will only become more pronounced as major financial institutions and faith institutions shift away from emissions intensive energy, either through financial decisions or divestment campaigns. I think the economic risks of pursuing this strategy are becoming clearer every day.

*Jennifer Morgan is responsible for day-to-day management of WRI’s global climate change program, and works closely with the WRI China, India, Brazil and Indonesia offices. In addition, Morgan is WRI’s lead representative at international climate meetings, including the UNFCCC negotiations.

The climate problem is all about carbon, carbon, carbon. So how come it is quoted only third in the above list: “clean energy, become more efficient and reduce carbon pollution” ?

China’s target of 20 GW is for wind-backed-by-gas, hardly “non-fossil” as quoted. The ten times more impressive — and non-carbon — goal of China is for 200 GW of nuclear by 2050.

It’s all about carbon.

It is also about further hamstringing this Nation’s entrepreneurs as they endeavour to access, work with LOW SPEED NBN, struggle to raise future capital, and compete with more enlightened Nations surging ahead in advancing Renewable technology. This current Government has no visional sense of world responsibility, is increasingly disconnected from the Electorate . . and is in full denial of an urgent need (two degrees warming) to address the universal challenge/opportunities of Climate Change.

Australia is walking into the past! The rest . . walking, jogging, running towards a future i.e. Germany, China . . . .

It’s another long article which avoids the key question of why Australia should make sacrifices which will not make any significant impact on Climate Change. There’s certainly no shortage of emotive appeals in Crikey Land and among the Faux Conservation Club, but rarely any attempt to mount a logical argument showing why the ‘conservationist’ proposals could be expected to work in the harsh realities of the world out there beyond our chardonnay / latte pipedreams.
Little wonder the Crikey Censorship Commissariat tries continuously to dissuade contrarian views for which they have no logical response.

Norman makes a good point. I mean, in a future world powered primarily by renewable energy, why would we want any knowledge, skills or investment in those fields ? We’ll just be able to keep doing the same thing we have been for the last couple of decades, selling off coal and land to import everything we need from the rest of the world, right ?