Why do loudmouths like Cory Bernardi get to front the National Press Club while many backbenchers languish in the pages of their local rags? Crikey investigates what it takes to get your name up in lights if you don't have a ministerial portfolio. 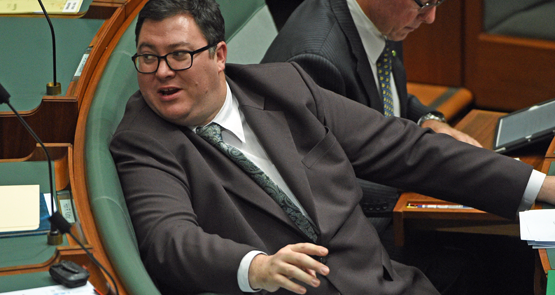 Are you a federal backbencher, quietly toiling away sitting on committees, voting on legislation and serving your constituents but never getting any press? How do you raise your profile and get your name in the media? Or are you doomed to (relative) obscurity until your party’s leader plucks you from the backbench and gives you a plum portfolio?

Crikey asked media monitoring company Isentia for a list of the 10 most talked-about backbenchers in federal Parliament over the past six months. These are the 10 men and women who, although they currently hold no ministerial position, still manage to get mentioned regularly in the media. We’ve put together some lessons from their example, in the hope that all MPs will get the public attention they so richly deserve.

1. Step down from the frontbench.

The No. 1 most-mentioned federal backbencher is Father of Australian Parliament Philip Ruddock, with 37,268 mentions across all media for the six months from early February to now. Ruddock’s fortunes have fallen significantly after he was sacked as chief government whip in the fallout from the failed leadership spill against Prime Minister Tony Abbott in early February, an event that by itself explains a lot of his coverage. Ruddock is now a mere backbencher, but he was attorney-general and immigration minister during the Howard years. Those portfolios got him a lot of coverage at the time, and Ruddock’s kept a fairly public profile (helped, no doubt, by his fondness for flashback Friday tweets and safari suits).

Wayne Swan, who comes in at No. 5 on the list, with 19,898 mentions, also gets a fair amount of press because of his previous position. The member for Lilley doesn’t go out of his way to get his name in the papers these days (he’s even been quiet on the meme front lately), but he’s invoked plenty by the government, who regularly raise the spectre of Swan’s treasurership as the Ghost of Irresponsible Spending Past. Swan was also in the news recently over his electoral chances at the next election. Although Swan has said he will renominate, a Labor strategist says it’s time to stick a fork in him.

The second most-mentioned backbencher in Isentia’s list is Labor Senator Sam Dastyari, who has only been in Parliament since the 2013 election but has made quite a name for himself. Dastyari, who got 29,000 mentions, became the general secretary of NSW Labor in 2010 and has been a factional powerbroker within the Labor Party for more than a decade. Dastyari is on numerous Senate committees, and is not backwards in coming forwards in asking tough questions during Senate estimates and committee discussions.

3. Pick an issue that’s about to blow up.

Although Liberal MP Warren Entsch did get some press earlier this year for fondling the shapely buttocks of Australia’s Foreign Affairs Minister, a lot of his media mentions come because of the member for Leichhardt’s stance on gay marriage. Entsch, who was mentioned in the media 28,344 times over the past six months, has spoken publicly about his support for marriage equality since at least way back in 2004, when he called his party’s anti-gay marriage platform “offensive” and “unnecessary”. Eleven years later, gay marriage is dominating the national agenda, and Entsch is a leading proponent within his party for it. He is expected to introduce a cross-party same-sex marriage bill in the next few days, although the Liberal Party has ruled out a conscience vote on the issue.

4. Say something offensive and stick to your guns.

In this category we have Senator Cory Bernardi (coming in at No. 4, with 21,370 mentions) and George Christensen (ninth, with 11,032). Bernardi was dumped from his parliamentary secretary position after infamously comparing homosexuality to bestiality. Unbowed, Bernardi has doubled down on his anti-gay marriage sentiments, saying society was moving in an “abhorrent and disgusting” direction if it was going to allow all people to have the same rights under the law. Homophobia is worth its weight in media mentions, though, with Bernardi offered the megaphone of the National Press Club to debate the issue of same-sex marriage with the Leader of the Opposition in the Senate, Penny Wong. Bernardi has also offered colourful (and bizarre) views on Muslims, climate change and domestic violence (he declared it was at times “appropriate” for a man to put a partner in a headlock).

But if Bernardi is somewhat off-course, Queensland MP George Christensen is at a different parade ground entirely. The member for Dawson is not only against the “Islamification” of Australia, he told Abbott “hell would freeze over” before he would pull out of attending a Reclaim Australia rally. Christensen also attended a speech by “Islam hater” Geert Wilders and labelled Greenpeace activists “terrorists” (incidentally, he supports the death penalty for terrorists, so make of that what you will). Christensen is a staunch opponent of gay marriage too, bizarrely linking same-sex marriage to gun laws.

5. Try to roll the Prime Minister.

This is the strategy for No. 6 on the list, Dennis Jensen. He has some very odd views (he doesn’t believe climate change is real but confusingly has suggested stringing a giant shade cloth between orbiting satellites to protect the Earth from global warming), but his biggest media splash came in February, when he announced he supported a Liberal leadership spill to depose Tony Abbott. That prompted plenty of “Who is Dennis Jensen?” articles and got him lots of press.

Also in this category is the seventh-ranked backbencher, Teresa Gambaro. who has had numerous clashes with the Prime Minister over everything from same-sex marriage to paid parental leave to Australia’s foreign policy blunders. She was one of the few MPs willing to openly criticise the Prime Minister for bringing February’s spill motion forward, which gave any potential challenger less time to shore up votes. For her trouble she faced the potential of a fierce preselection battle for her seat of Brisbane and risked losing LNP endorsement. All parties decided to play nice, though, with her potential challenger pulling out of the contest.

6. Secure a position of power.

In eighth spot, somewhat unsurprisingly, is Parliament’s new Speaker, Tony Smith, with 14,252 mentions over the six months. While Smith got a spike of publicity when Western Australians returned to the polls to vote for new senators (he is chair of the joint standing committee on electoral matters) earlier this year, his recent surge in popularity is due to his elevation to the Speaker’s chair after Bronwyn Bishop resigned in disgrace.

Rounding out the top 10 is Sharman Stone, coming in at 10,826 mentions for the six months to August. Stone is not afraid to speak out for causes she believes in (she vigorously defended fruit processor SPC Ardmona when the government declared the age of entitlement was over for tinned peaches), and her name has come up in the media over the past six months on two main issues: parental leave and women in Parliament. Stone used the occasion of the 2015 budget to demand the government come up with a sensible parental leave policy that would support poor women. And more recently Stone got a fair bit of press for suggesting the Liberal Party adopt quotas for female candidates for preselection. Her comments did little to endear her to the Minister for Women, but she got plenty of ink out of it.

At least I’m not a homophobe, mate

You missed out the most obvious method. That employed by the Late member for Canning

Never mind dying. (That’s a fairly extreme method for just a few mentions in the media.)
Why not do a Dan Tehan and declare war on Syria?

What about really frightening the horses and only representing the views on your constituents?
That’d shake the bejazus out of the sclerotic time servers and apparatchiks!