Behind the Abbott chaos: no agenda and a failure to do the basics

Behind the government's chaotic week there are consistent patterns at work that explain why Tony Abbott's government is dysfunctional. 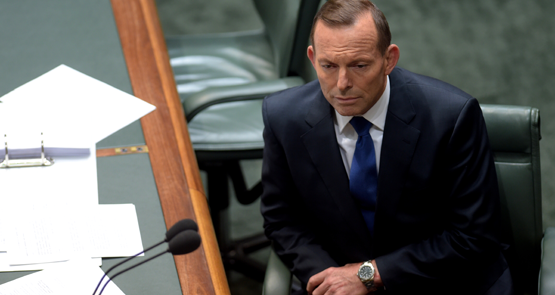 After a week in which the government appeared to be conducting a kind of bungle Olympiad, with dud policies, clunky politicking and straight incompetence on constant loop, it’s a little difficult to resist settling for the obvious analysis that this is a level of near-Whitlamesque chaos of a government that is in its death throes. But it pays to sift through events to establish exactly what’s driving the chaos.

One key factor is that doing the basics of political management appear to be beyond the capacity of the Prime Minister’s Office, which turns little problems into big problems and lets big problems turn into ones that endanger the government. For example, it’s been known for months that Warren Entsch planned to introduce a same-sex marriage bill into Parliament when it resumed, and he flagged it again at the start of the week. Entsch then “surprised” the party room by raising the issue, sparking an epic meeting that lasted much of Tuesday night, the result of which was Tony Abbott’s hastily crafted plebiscite/referendum “disposition” which became, by question time the next day, hard policy. The whole process would have played at far less chaotically had the leadership decided to manage the process around the Entsch bill rather than, apparently, hoping it would just go away.

The chaos then continued in the aftermath, with Scott Morrison declaring that a referendum was the way to go. That prompted what’s left of the moderate in George Brandis to go on the warpath: the Attorney-General drew on every ounce of his near-limitless capacity for legal pomposity to hammer Morrison back into his box and declare a plebiscite was the only rational option. Which is a problem for Abbott, who was doubtless counting on — if need be — a referendum to make it as hard as possible to ever achieve marriage equality. Sound political management would have locked down the details of the “plebiscite/referendum” idea on Tuesday night and made sure senior ministers, if not the backbench, were on the same page and didn’t go around belting each other publicly over it.

Another failure of management was apparent yesterday once Dyson Heydon’s staggering misjudgement about a Liberal Party event was revealed. The government line was surely obvious — Heydon had rightly withdrawn from the event; it was inappropriate both in terms of apprehended and actual bias that he attend any party events, whether fundraisers or not; clearly Heydon didn’t expect to still be engaged in the royal commission at this late stage but it turns out the level of union corruption is far more extensive than expected, etc, etc — simple stuff. But we ended up with the Attorney-General declaring it wasn’t a fundraiser in the Senate and Tony Abbott declaring it was a fundraiser in the Reps, then Abbott, having been asked to reconcile the differences, saying he hadn’t said any such thing, then having his own words quoted back to him, only to respond that he stood by both statements. Abbott looked a a fool, and he looked a fool because the basics of political management weren’t done.

Another key factor is that such matters are more likely to blow up catastrophically when there’s nothing else happening. And there is, literally, nothing else happening in the government: there is no government agenda, let alone a convincing narrative. Parliament has returned after a six-week break with little to do, because the government is unwilling to put forward legislation it suspects might fail in the Senate. This week Joe Hockey triumphantly announced that legislation establishing the government’s medical research fund had been passed. Even that wasn’t achieved without a bungle — in the Reps, the government had to vote down its own Senate amendments because they fell foul of the rule that the Senate can’t initiate money bills. But in terms of the government’s reform agenda, that was it for the week — the fig leaf for the abandoned GP co-payment passed 15 months after it was announced.

There was also the emissions reduction target, but that is, like the same-sex marriage plebiscite/referendum disposition/position, a political fix, not a policy, designed to create the illusion the government takes climate action seriously, while furiously giving CPR to the coal industry and attacking renewable energy; the dearth of any substance about how even its hopelessly inadequate targets were going to be met, let alone specific costings, gave the game away. If there’s any agenda here, it’s an agenda to look like the government has an agenda.

Finally, there’s the fact that increasingly Abbott is returning to fighting Liberals, which he admits he’s no good at: not merely opposing a conscience vote and failing to consult cabinet on same-sex marriage but roping in the Nationals to back him up on same-sex marriage, to the fury of Christopher Pyne and others, and sending Scott Morrison out to argue for a referendum (aka the sabotage option) — all aimed at undermining moderates, particularly on his own frontbench. That Labor ended the week asking Abbott to explain why he and George Brandis were contradicting in each other in their respective chambers was an elegant symbol of how this is a government racked with division, led by a man obsessed with saving his own leadership at the expense of his party and, most certainly, of the national interest.

“Watching the adults do it, it all looked so easy” thought little Tommy Pickles.

What rAbbott needs at this stage is another national security event requiring about four flags behind the podium on which he will stand promising Australians young and old the he will protect them.

Bernard, your last line says it all; Abbott’s last interest is the country’s welfare. It’s all about his survival, then implementing his values, and then the party. Somewhere miles further down the list is Australia, and at the very bottom of that bucket there’s Austrlia’s poor. Refugees, being impoverished non-Australians, don’t even register with the grand smuggler of budgies.

Abbott was successful electorally as an opposition leader because he created the illusion of chaos in the Govt.

And that, Bill Hilliger, is why we are suddenly talking about bombing Syria. You can’t tell me Dan Tehan is acting on his own in this whole shebang.