Hockey on the way out? He’s got one of the toughest jobs in the country, and we hear that Treasurer Joe Hockey is feeling disillusioned with politics and is looking for a way out. He’s not had the easiest run, with our tipster pointing to “his disappointments and frustrations, his defamation case and large costs, young kids, etc, no longer mentioned as a possible successor to Abbott” as reasons why Hockey is considering his future. We asked Hockey’s office if he would be contesting the next election and were told “it’s safe to assume he will”. Surely they know it’s not safe to assume anything in politics? Watch this space.

More like guidelines. Parliamentary press gallery journalists have been given their standing orders by press gallery president David Speers, who has written to members advising them of what to do when the Speaker asks that people stand for condolence motions. We understand that it was an issue before question time on Tuesday, when half the gallery stood at the condolence motion for the passing of Don Randall, others sat, and others stood after a delay. Ever knowledgeable, and with the help of Dennis Shanahan, Speersy has the answer:

“We often have some confusion in the Gallery when the Speaker calls on members/those present to stand (after a condolence motion for eg).

As several people have pointed out, it’s not a good look when half the Gallery stands and the other half sits.

Obviously it’s entirely up to you what you choose to do.”

Glad that’s all cleared up.

Marriage Alliance’s alliances. It’s already been reported that the new anti-gay marriage group Marriage Alliance has many longstanding ties with the Liberal Party. Face of the party Sophie York was a Liberal preselection candidate for the seat of Bradfield, the party is backed by former Liberal Party president Ashley Goldsworthy, and its media is managed by Nathaniel Smith, numbers man and son of former NSW attorney-general Greg Smith. A tipster has pointed that the “T. Faulkner” who authorises the group’s TV advertisements is actually Tio Faulkner, former president of the ACT Liberals and former staffer to Liberal Senator Zed Seselja, who is also against same-sex marriage. Faulkner was engulfed in controversy in 2012 when he was criticised for running the ACT Liberals while also having a taxpayer-funded job as a staffer. Faulkner is also listed as a founder of the group by biblesociety.org.au. After this week’s vote by the Liberals to bolster their position to keep the status quo, we wonder why all these Liberals feel the need to start a separate group, when their party is blocking marriage equality just fine without them.

Numbers are hard. There’s a follow-up to our tip last week about how Tony Abbott’s claim that Adani’s Carmichael mine project would generate 10,000 jobs. We pointed out at the time that Adani’s own expert witness had provided evidence that it would instead produce 1464 jobs per annum. But a check of the documents surrounding Greg Hunt’s now-withdrawn approval of the project shows that Abbott’s 10,000 figure isn’t even the government’s own number. In approving the project, Hunt’s documentation said Carmichael would produce a total of 2475 temporary constructions jobs and 3920 during the ongoing operations phase. They’re the government’s own numbers on how many temporary and long-term jobs would come out of Carmichael, and were even reported as such last year. It’s one thing for Abbott to simply make stuff up, but quite another to make something up that contradicts his own government’s numbers. 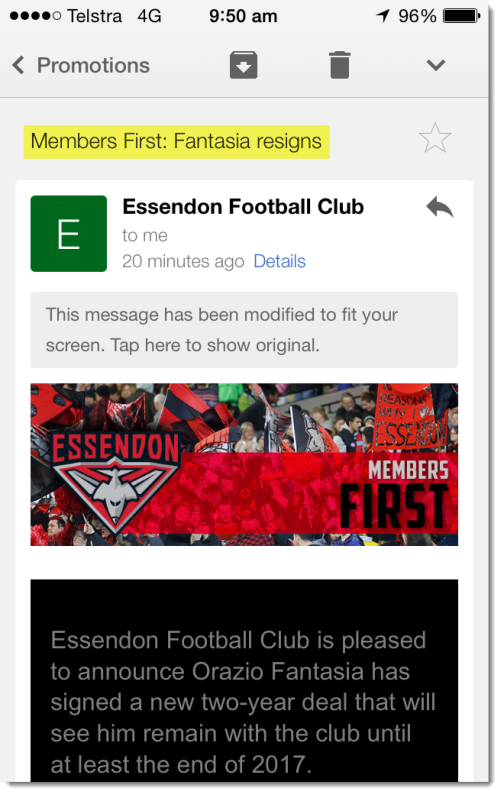 Yes, there is a player with the name Orazio Fantasia, but he didn’t end his career at the tender age of 19, instead he committed to stay with the club for another two years — re-signing a new contract. Obviously after some emails from panicked fans — and those who know how to use punctuation correctly — the club tweeted this later in the morning:

Can your very fine investigative staff ascertain how much the taxpayer is supporting the likes of Kyrgios, Tomic and the male cricket team?