Official: Australia is worse for mining investment under the Coalition

Despite the abolition of the mining tax and Tony Abbott spruiking coal, officially Australia is a poorer place for mining investment than under Labor, Bernard Keane and Glenn Dyer write. 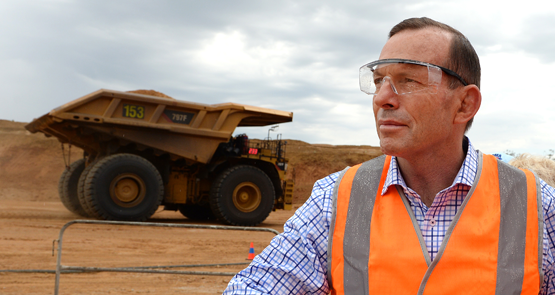 The abolition of the mining tax and the Abbott government’s strong support for the coal industry have failed to restore Australia’s position as the top destination for mining investment that it held under Labor.

Australia remains second to Canada in Behre Dolbear’s annual “Where To Invest In Mining” survey, the same ranking as 2014 from the veteran US-based mining consultants. For four years prior to 2014, however, Australia had been officially the world’s best place for mining investment — a claim remarkably at odds with the apocalyptic rhetoric of the Coalition and the mining industry about Labor’s tax regime and support for mining. Last year, despite the 2013 election of a pro-mining government, Australia was overtaken by Canada when its score on “social issues” rose by more than Australia’s score rose.

Since the 2014 Behre Dolbear analysis, the government has succeeded in repealing the mining tax, has spruiked coal as key to the future of humanity, and has tried to shut down investment in one of the resource sector’s main competitors, renewable energy. But that hasn’t been enough to recover the position Australia’s mining sector held under Labor.

And the report doesn’t do Prime Minister Tony Abbott’s performance as a resources sector stock tipster any favours. Abbott notoriously declared Australian National University’s decision to divest in resources company Santos “stupid” shortly before a precipitous dive in the company’s share price had it lose 40% of its value. Back in 2010, Abbott declared “now it is safer to invest in Argentina, in Tanzania, in Zambia, in Ghana and in Botswana than it is to invest in Australia”. The highest of those on the Behre Dolbear list is Botswana, which is eighth, followed by Ghana, 10th, and Zambia, 12th. Tanzania has fallen to 20th.

Indeed, if you’d followed Abbott’s advice in 2010 and sold your Australian mining shares and bought into Tanzanian mines, Behre Dolbear has some bad news for you:

“Tanzanian social issues have adversely impacted investor confidence, as depicted by its rank depreciation over the last three years. Modern, mechanized operations compete with small-scale artisanal efforts while foreign investors have had difficulty with training locals to work in modern, industrial settings. Inadequate infrastructure also places notable limitations on the expansion of the sector. Frustration has manifested itself in violent incidents at foreign-owned mines, such as Bulyanhulu.”

As for Argentina, “Argentina continues to disappoint foreign investors. The Argentinian national government’s fiscal budget crisis has had a costly impact on its currency, politics, and international standing, which has lead to a complete loss of investor confidence.” On the other hand, Agriculture Minister Barnaby Joyce can take some comfort from the company’s assessment that “the mining sectors of both Asia and Australia have become overly dependent on Chinese investment”.

Of course, the reality is that — as the interim results of Rio Tinto this week showed — the mining sector, even with weaker demand, lower prices and falling investment, remains a reasonable place to invest (the mining services sector is a different story, of course — that’s bleeding). Cash is still flowing in — even if it’s less than a couple of years ago — debt and costs are being cut, and the fall in the Australian dollar has also helped. On top of that, there’s the lowest wages growth on record and an industrial relations system that provides flexibility and has generated a rise in labour productivity. Admittedly, China remains a concern given the sector’s over-dependence on it, and coal appears to have an increasingly bleak future, but if the dollar maintains its current level in a year’s time, the outlook for the sector will be on the improve.

Even given poor commodity prices, mining looks a better investment right now than oil and gas, which have still to suffer the industry shakeout from the slide in prices in the past 16 months, and the latest dip in the past two months — following a rally early in the year.

All of which is entirely at odds with the constant whining from the minerals sector about how tough they’re doing it and how everyone — the greenies, the unions, Labor, the banks — are out to get them.

China needs Australia more than we need them

Keating’s quarry scenario: the Russians are coming. And the Chinese. And Japan.

Official: Australia is worse for mining investment under the Coalition.

Well bugger me, who would have thought that. The mining industry’s only wish was for the Labor government to be gone and replaced the an LNP government with the clear thinking and can do adults in charge. Alas so far after two years, it appears it’s not so, it was a just a mirage.

Many would say to the mining industry suck it up and enjoy, or cough your guts up, whatever. What was the term? Oh yes, sovereign risk.

Looks as if it was true when they wanred us that if we didn’t play nice they’d take their filthy holes elsewhere.
Myne heart breaketh NOT!

Well, golly gosh, turns out Abbott’s been bullshitting even more! I find that hard to believe. By which I mean I find it hard to believe that anyone could bullshit so much. Any other mortal would be completely depleted by now, but not our Tony. Must have been saving it up since he was a kid, or perhaps a calf.