Indonesian President Joko Widodo used a Hack poll to justify the execution of Andrew Chan and Myuran Sukumaran. Plus other media tidbits of the day.

Hack poll helped cement Widodo’s mind. In February, Triple J’s Hack aired a poll conducted by Roy Morgan research that asked respondents whether or not they supported the death penalty for Australians convicted of drug offences in other countries. Half (52%) voted in the affirmative, texting “Y” to the radio station. As it came in the midst of the ultimately unsuccessful clemency campaign for Australian drug smugglers Andrew Chan and Myuran Sukumaran, many criticised the poll for giving Indonesian authorities the ammunition they needed.

Roy Morgan (and Triple J) defended the poll, arguing it was its job to reveal public opinion, and that previous polling showed Australians were often supportive of the death penalty in such situations. But in an interview with Fairfax, former Indonesian constitutional court chief justice Jimly Asshiddiqie said the poll had been important to cementing the Indonesian government’s thinking on the issue. President Joko Widodo, he said, used the poll to conclude not all the Australian public were concerned about the executions.

“So they think this is only about Abbott’s politics, not Australia as a whole … the [Indonesian] government thinks this is not hurting the people of Australia, it’s only elites, who claim to be popular by misusing public anger,” Jimly says in a piece by former Fairfax Indonesian correspondent Michael Bachelard. The poll’s findings, he said, had “made the Indonesian government become more strong in their position”. — Myriam Robin

SBS apologises for map. SBS has apologised and vowed to update the graphic displayed online and in future airings of Go Back to Where You Came From after it accidentally left Israel off the map, reports the Australian Jewish News. 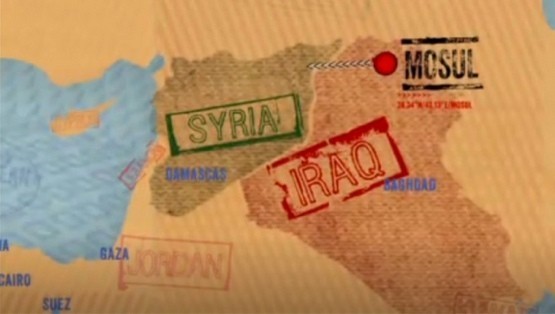 The offending graphic, which shows Gaza but makes no mention of Israel

The show aired the graphic above in its final episode. Zionist Council of Victoria president Sam Tatarka complained to SBS and got a speedy apology and promise to update the graphic online.

“Unfortunately, due to an oversight, the title ‘Israel’ on a stylised map of one of the regions visited was missing, and SBS sincerely apologises for the error,” an SBS spokesperson reportedly told the AJN. The weekly paper quotes Tatarka welcoming SBS’ swift response. “It is refreshing to have a media organisation acknowledge an error and take immediate corrective action,” he said.

Elkann branches out. Here’s a quandary for John Elkann, one of the richest people in the world and a News Corp director: should he remain a director of the Murdoch empire’s faltering print, property and pay TV business after his family company lifted its holding in The Economist to become the global newspaper’s largest shareholder? Overnight, the sale of the 50% of The Economist held by Pearson was announced (for a juicy 469 million pounds, or around A$1 billion). The move follows the sale by Pearson of The Financial Times for 844 million pounds to the Nikkei of Japan (which is Japan’s leading financial newspaper).

The buyer of most of that Economist stake holding was a company called Exor, which is the holding company of the Agnelli family and controls car maker Fiat, which in turn controls US car company Chrysler. Elkann is the heir of Fiat, which was founded by his great-great grandfather.

Exor first invested in The Economist 2009 and will increase its holding from 4.7% to 43.4%. The next largest shareholder will be Lady Lynn Forester de Rothschild and her husband, Sir Evelyn, with 26%, up from 21%. The Financial Times says:

“Exor will have the right to appoint six of the Economist Group’s 13 directors. The group’s articles of association will be amended, however, so that no single shareholder can have more than 20 per cent of the voting power, or can hold more than 50 per cent of the shares.”

Exor is now a direct competitor to News Corp’s papers such as The Times in London and The Wall Street Journal in the US. So should Elkann maintain his directorship of News? Will the rest of The Economist’s board and shareholders ask him about what he plans to do with his News Corp shareholding? — Glenn Dyer

Foxtel’s lament. Foxtel had a tough year in 2014-15, in both Australian and US dollar terms as the new price packages and greater competition, plus lower ad revenues, hit revenue and earnings growth. The News Corp annual results, released this morning, show Foxtel’s operating profit for the year to June fell 20% to US$441 million from US$554 million in 2013-14, on an 8% slide in revenues to US$2.66 billion, a fall of US$239 million.

News Corp said the fall in revenues and operating profit was “due in large part to the adverse impact of foreign currency fluctuations. In local currency, full year Foxtel revenues increased 1%, driven by subscriber gains”. Foxtel’s earnings before interest, tax, depreciation and amortisation fell 8% “due to short-term impacts related to the investment in key initiatives: the new Foxtel pricing and packaging, increased investment in Presto and the launch of Triple Play”.

News Corp chief financial officer Bedi Singh told the results briefing that Foxtel lifted subscribers by 230,000 in the year to June, with an extra 84,000 of that added in the fourth quarter:

More bad news for News. News Corp is moving to sell its loss-making online education business called Amplify (started by board member Joel Klein) after confirming a multi-million dollar write-down amid a top-to-bottom review of the faltering business. CEO Robert Thomson told a briefing this morning after the News Corp results were released, that the company was in fact at an ”advanced stage” of selling the business. In fact he told a questioner that News was “in the final stages of negotiations” to sell Amplify, whose value was written down by $US371 million in today’s report. Thomson did not name the potential acquirer.

If Amplify is sold, it will be the biggest disposal since the company was born in the Murdoch clan split of June 2013. Since the split, News has bought Harlequin (the Mills and Boon publisher for over US$400 million); Storyfill (US$25 million), the video newsagency; Move Inc (almost US$1 billion) , the US online property group similar to REA Group in Australia; and an online property site in India.

At the same time, the company’s print businesses around the world had a less-than-stellar fourth quarter, with weak ad revenues in Australia and the UK failing to be offset by a stronger performance in the US at The Wall Street Journal, while the impact of the strong US dollar again hit the bottom line. — Glenn Dyer

Front page of the day. The Gold Coast Bulletin gives the NT News a run for its money today with zombies (naughty ones, no less!) and sharks … 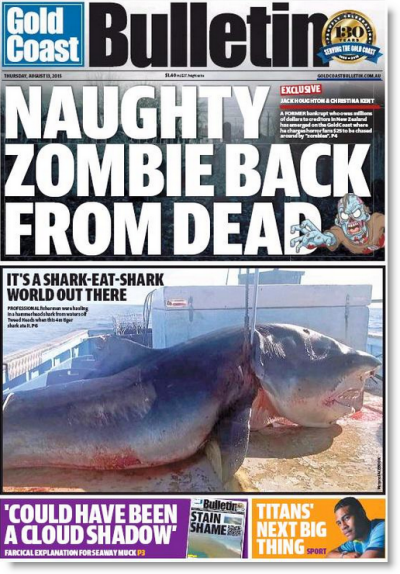