If Abbott loves plebiscites so much, here are a few more he can have

Tony Abbott's sudden enthusiasm for letting voters decide on policy issues could usefully be extended to any number of key reforms. 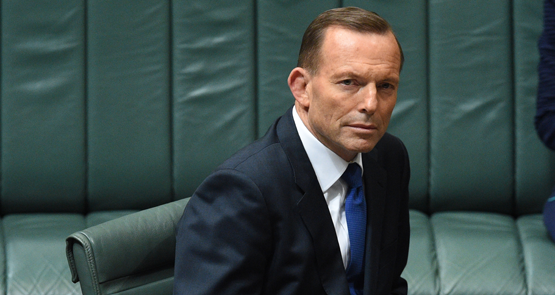 In just a few months, Tony Abbott has undergone a profound shift in position on same-sex marriage, from dismissing any popular vote in Australia in the aftermath of the Irish referendum to now embracing a referendum here as a way of solving his political difficulties on the issue and, as Phil Coorey explained in the AFR today, trying to maximise his chances of preventing marriage equality from ever happening.

Yesterday in question time what had the previous night been a mere “disposition” to conduct a referendum after the next election on the issue hardened into an actual policy, without any intervening partyroom discussion. “This government wants the people to decide,” Abbott told Parliament. “Over there they want the politicians’ choice. Over here we want the people’s choice, and what could be fairer than leaving this to the people of Australia?”

What could be fairer, indeed, than leaving major policy issues to the people of Australia, rather than having a group of politicians decide them? It’s a reprise of Abbott’s argument against the republic back in 1999, that a president appointed by Parliament was inferior to a popularly elected president. “You can’t trust politicians,” Abbott warned back then — although he took a radically different view about ministerial powers to prevent Australian women accessing RU-486, which Parliament stripped him of in 2006.

What could be fairer than leaving some other issues to the people of Australia? If Abbott thinks a plebiscite or referendum is fair and appropriate for same-sex marriage, why not for these issues?

Or perhaps economic issues are too hard for voters to properly think about and they should be left to the politicians. Maybe Abbott just wants popular votes confined to social issues. So let’s try:

And let’s see the government put the question of Australia’s repeated military interventions in the Middle East to a vote. In 2014, twice as many Australians thought the Howard government’s decision to invade Iraq was the wrong decision one as thought it was the right one, while 50% of Australians oppose sending Australian troops to help “train” Iraqi forces to fight Islamic State.

In fact, here’s a much better idea for a referendum than all of those: let’s ask voters to decide whether they actually want the extraordinarily expensive cost of having over 200 federal politicians if they’re just going to dump politically inconvenient issues off to plebiscites rather than lead the country.

The tortured logic of homophobia (or how to defend an anti-gay marriage stance, Coalition style)

Abbott’s tactics in the debate are plainly obvious but I think a referendum on this issue is not such a bad idea, given that the anticipated change in the Marriage Act to allow same-sex marriage could be attacked as unconstitutional. In addition, I think the recent Irish experience is a good example for us. As for Bernard’s long list of other plebiscite candidates, some I think would lend themselves to a direct public vote, others are not so sensible.

Sunlight in the bat cave?

Brilliant analysis of a prime minister lost in the forest of political confusion.

Not a bad list Bernard. There is one problem however, and that is that despite public opposition on many issues, it does not make any difference which of the Coalition or Labor occupy the Treasury benches. Involvement in America’s wars is a classic example. In the 1960s and 1970s the majority opposed Australia’s involvement in the Vietnam War, yet “all the way with LBJ” was the politician’s catch cry. The same is true of involvement in the illegal wars in Iraq and Syria.
May I suggest that the only path to a more representative parliament is to cease electing pink and blue Tories and choose a real alternative.

That list is all good, but it wouldn’t be much of a stretch before we are asked to vote on the reintroduction of the death penalty.