Affording equal legal status to all does not create or even promote equal social or economic status, and the deck would still be stacked against gay people even if they were legally allowed to spend days discussing bomboniere. 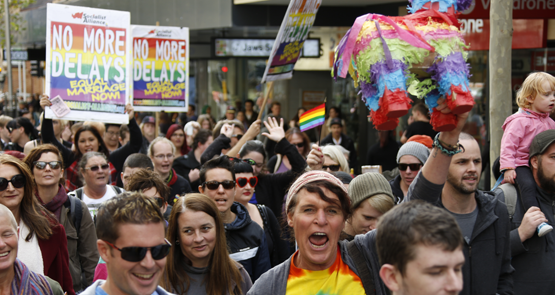 A case of potable beer to Josh Taylor, Crikey’s own decryption device, who yesterday sifted for sense through the logical debris left on the floor of the Coalition party room after its debate-slash-Mel-Gibson-fanclub-summit. Taylor patiently recounts the “arguments” that would oppose same-sex marriage legislation and a conscience vote on such, and we can only imagine that this necessary labour was about as rewarding as a full-price session of The Passion of the Christ.  Which, incidentally, is a supremely homoerotic film. There has never been a hotter, more naked Jesus.

And rarely in the history of the Coalition has there been greater effort made to dress scorching hostility in the cool garb of reason. As Taylor points out, the concealment of this hot, naked hate for homosexual practice failed on Tuesday night. Argument like “we don’t want to upset our constituents” just doesn’t work when surveys on support for same-sex marriage dependably work their way up to unanimity. Argument like “gay people don’t want to get married, anyhow” just doesn’t work because when, after all, has a Coalition government ever given a solitary fuck for what queer people want? There has, to my fair knowledge of gay lib history, never been a single piece of legislation advanced by a Coalition government on behalf of homosexual citizens. The Coalition never moved to decriminalise homosexuality. The Coalition never thought to change visa laws for same-sex partner immigration. Labor can lay claim to passing all the most significant, and even the least significant, reforms on the matter. And, while we’re hard at the political past, Liberal Philip Ruddock can be always remembered as the guy who failed to pass a recommended suite of legislative changes during his term as attorney-general and he who introduced the “Marriage is Between a Mel and a Woman” amendment to the Marriage Act in 2004. I urge all homosexual flight attendants to withhold Ruddock’s warm nuts the very next time he takes a subsidised flight to Perth.

It is not surprising that the Mels and women of the Liberal and National parties who have been for so long so formally opposed to homosexual practice should continue to argue against it. Equally, though, it’s not surprising that the arguments they use to maintain this antique opposition sound stupid, even to them. The arguments sound bad because, unlike a National, a Liberal cannot, in the current era, truly believe them. Even if Liberal parliamentarians hate the idea of homosexuality, they are ideologically bound to hate the idea of rights violations much, much more.

Sure, you can be a Liberal and be repulsed by the idea of two blokes going at it hammer-and-tongs with a blessing from the state. But you can’t ultimately be an electable Liberal and reject the idea of neutrality before the law with so many people shouting “equal love!” at your party, to which a mythic legal equality is fundamental.

It is absolutely crucial for a functioning Liberal to uphold the fairytale of equality as a solely legal matter. A Liberal must be able to not only say but believe that a program like WorkChoices is about choice and equal opportunity. You have the “right” to be screwed by your employer and there is no legal hurdle in your way. A Liberal must be able to say, with a straight face, that the fact of many individuals struggling financially is an individual fault. You have the “right” to make piles of money and there is nothing in our just and neutral law that prevents it. Our law contains no immediately visible trace of discrimination and so, if the public machinery can’t be held to blame for the shit you’re in, it must be your private fault. Why don’t you just buy a house? Loser.

The idea of the fair state that legislates chiefly to erase impediments to freedom is Liberal 101. It’s bullshit, of course, to believe that discrimination can only be meaningfully managed by government through legal means. Discrimination, in my basic fuck-the-Liberals view, is best managed in a liberal democracy by astute programs of wealth redistribution. Affording equal legal status to all does not create or even promote equal social or economic status and, if you don’t believe me, return to 1967 and come report back on how much life for Aboriginal Australians statistically improved. Spoiler: it didn’t.

This is not to support a constitutional clause explicitly exempting government from giving a shit. It is, however, to say, as a zillion critics of rights-based governance have, that the law is no guarantor of justice. In fact, the implementation of legal rights can, and often does, perform the opposite function. If the state can say it has removed all legal barriers to equality, your actual lack of it is all your fault. Why doesn’t your gender collect more superannuation? Loser.

It is difficult to remember that a rights-based approach that prizes individual liberty and says “we are all equal before the law” is malarkey. Or that legal equality was seen as antagonistic by leftist thinkers since ever there were leftist thinkers. Nowadays, even those who claim in their social media bios that they are further to the left than a fish fork love the idea of rights in law.

People really, truly think neutrality in law will make an important difference, and they recently gave praise to the US Supreme Court in rainbow colours. That they performed this liberty paint-job in the same week the Supreme Court upheld the “right” of the state to administer lethal injections and the “right” of corporations to fart their waste into the air didn’t matter. That they were celebrating the loss of domestic partnership employee entitlements to those same-sex couples who elect not to wed didn’t matter, either. That locals were rejoicing in the “freedom” of US lives that are, even for persons in homosexual relationships, far less functionally free than Australian lives was, somehow, irrelevant. Because FREEDOM.

This is not to actually oppose amendment to the Marriage Act, and it is not even to feign confusion at its popular support. Just a few minutes on YouTube looking at videos of healthy, happy, handsome, lily-white gay men crying with connubial joy makes the whole “equality” thing easy to understand. Certainly, such legislation would make some people happy, and possibly, it will create a mini-boom in sale of those same-sex cake toppers I sincerely hope the copy editor doesn’t use to illustrate this fucking story. I even occasionally find myself wishing marriage laws would change so that we can all see, for the Nth time since the Enlightenment, that people don’t become more equal just because the state makes equality legally possible. Otherwise, I don’t give a crap.

But the people who should give a crap are those 80,000 sufficiently deluded and/or aspirational to join the Liberal Party. If these twits are to prosper or even to retain power, they simply must board the rainbow train. They must not permit the moral prejudices of a previous age to impede their speed toward neoliberal evil. If they allow the illusion of legal equality to shatter, they’ll find no mirror to lie to them about their ideological beauty.

There are, as I count them, three reasons to campaign for marriage equality. I list them in ascending order of ugliness.

First, there’s the curious urge to have one’s most intimate relationship ratified by the state. And again, a rubber stamp is all that marriage will provide. Thanks to the work of the Lesbian and Gay Rights Lobby and the good sense of the Rudd government, all Commonwealth acts were emptied of material and legal discrimination toward same-sex couples in 2008.

Second, there’s the need les bourgeoises have to inject their dull lives with a spark every now and then. Just as well-to-do white people like to bring hip hop music written in parts of Los Angeles they would never visit to their Audi sound systems, well-to-do straight people like to bring charitable tolerance for transgression to their dinner table.

Finally, there’s the need neoliberalism has to seem, above all, fair and equal. If there ever were a Liberal cause, this is it. Which is to say, it’s a legal pantomime whose widow wonders where “justice” has gone while her faithful audience screams “it’s right behind you!”. This cheap and crowd-pleasing promise of absolutely nothing dressed up to look like equality is the electoral boost Abbott needs. For the sake of true equality, let’s hope his numb hate continues to thwart his public ambition. And his private defeat will be all his fault. Loser.

… and Helen Razer makes the queer case against it 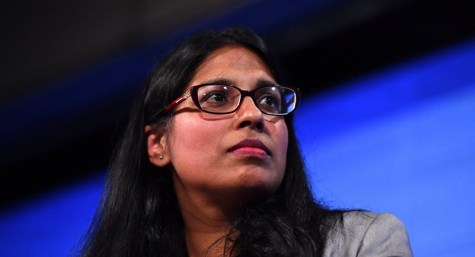 Who is Karina Okotel and why does she dislike marriage equality so much?

Great article Helen…good on you for giving their crap ideology both barrels, and then some..!!

I would like to see this treatise as part of the Ethics syllabus at my local primary school.

Here’s a neat report on a group of radical queers in Tennessee (they’re reviving the 70s and 80s Radical Faeries groups, god bless’em). One of their axioms is a total rejection of marriage as one of the root causes of evil in the capitalist world:
http://www.nytimes.com/2015/08/09/magazine/out-of-the-woods.html?action=click&contentCollection=magazine&region=rank&module=package&version=highlights&contentPlacement=1&pgtype=sectionfront&_r=1

I initially failed to see the “with” in “I urge all homosexual flight attendants to withhold Ruddock’s warm nuts the very next time he takes a subsided flight to Perth.” Which was weird because I don’t think that Ruddock’s nuts would be warm. They would be two little ice-cubes, as cold as his frozen heart.

Helen, your arguments seem logical to me: this is a ridiculous sideshow to things that have a material effect on the well-being of people. And it *is* very enjoyable to watch Tony and his crew wallow around in a vat of distilled stupidity. Watching them continue to do so might even make Bill a little more attractive to the punters at the ballot box next elections.

But the endless moaning is just so tiresome that I just wish they’d get it over with and sign something into law already.