Fairfax staunches the bleeding in metros, with Domain still its battlefield angel

Fairfax's digital revenue is making up for a fall in print advertising and circulation at The Age and The Sydney Morning Herald. 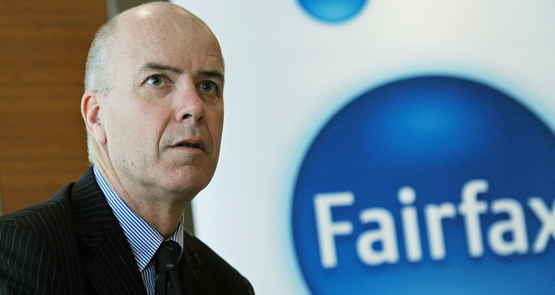 Fairfax’s underlying net profit eased nearly 4% to $143.4 million after tax, off the back of a 5.3% drop in revenues to $1.88 billion, but those who hope Fairfax’s most prestigious papers will be around for decades to come will be heartened by today’s full-year results. They show the metropolitan media publishing division, which includes The Sydney Morning Herald and The Age, has stemmed the tide of red ink. Although the division is still struggling, rising digital revenues (from its paywalls and ads) are having an impact. But tied up in that improvement is the still-surging performance of Fairfax’s Domain online and print real estate business, which is second in the market behind News Corp’s REA Group.

Metropolitan media reported a 52% increase in earnings before interest, tax, depreciation and amortisation. Metro publishing costs fell 7% for the year and 28% over the last three years, according to Hywood. In comments this morning, he credited the closure of the Tullamarine and Chullora printing sites and the adoption of “new ways of delivering our journalism and content”. On a revenue basis, the division was up 3.3% to $829.9 million — from $803.2 million last year.

According to figures provided in the investor briefing, when it comes to advertising, digital revenues for the division are drawing close to those in print. Print advertising revenues (taking into account the addition of MMP’s newspapers) fell only $1 million (or 0.5%) — from $280.7 million to $279.4 million, while digital ad revenues soared 22.6%, to $219.9 million. But digital subscriptions, while growing strongly, are still chump change in the equation. The division  grew digital subscriptions revenue by 36.2%, but it still brings in only $32.7 million. That’s with 159,000 paid digital subscribers across The Age and the SMH, as of early August. Print circulation, meanwhile, brought in 3.2% less money than it did a year ago — $197.5 million.

Adding up the the revenue from digital subscriptions and digital advertising shows digital revenue grew $54.2 million over the year — meanwhile revenues from print advertising and print circulations fell only $4.8 million. While Fairfax has been talking up the effects of its Fairfax of the Future strategic plans for some years, this year’s results show signs digital revenues in the metropolitan division are growing faster than print revenues are declining. It’s possible this rate of growth isn’t sustainable — while print advertising revenues only fell 0.5% this year, they’d have fallen 11% if not for the acquisition of Metro Media Publishing’s suburban newspapers by Domain.

Domain, housed within metropolitan media, reported full-year growth of 45%, bringing in total revenues of $223.3 million. There was a 16% increase in property listings and a 20% increase in the number of property agents who subscribed to Domain. Fairfax’s briefing states that its listings-market penetration was 85% over the year, up from 68% in June 2014, bringing it closer to total coverage of the property market. The briefing also boasts the real estate site is catching up to (majority News Corp-owned) market-leader REA — there’s now a 33% gap between the two in unique audience for their ads, according to Nielsen online rankings.

As in previous years, a great deal of detail is provided about the Domain business, including its costs of $140.3 million, which have grown at about the same rate as its revenue. Total EBITDA on the sub-division is $85.9 million, from slightly improved margins of 36% in print and 39.6% in digital. It comprises a small but quickly growing part of the total metropolitan business, helping prop up the newspapers through the fuel of the property boom.

Overall, Hywood said that — excluding closed operations and disposals — Fairfax had “reported top-line growth for continuing businesses for a full year for the first time in eight years”, with underlying revenues up 0.3% to $1.84 billion, and key to that was the 45% jump in revenue at Domain.

On the Masareti front, Fairfax’s executives didn’t get a bonus for sacking people this year. Last year, several of the company’s key executives were awarded a cumulative $2.4 million pay rise after clearing hurdles for incentive pay in Fairfax’s strategic plan, which controversially included successfully shrinking the workforce. Coming at a time the Media, Entertainment and Arts Alliance was being told the company couldn’t guarantee any enterprise bargaining agreement pay rises at all for the year, Hywood and several others were excoriated in the press. This year, Fairfax’s top executives’ total pay packets declined slightly. They weren’t awarded performance shares and options, as their incentive pay only vests “on satisfaction of performance conditions which are to be tested in future years”.

What’s the use of being a nit-picky pedant if you can’t pick a few nits now and then?