We've heard an asylum seeker has set himself on fire on Christmas Island.

No answers here. We’ve received a tip from multiple sources telling us that a mentally ill Iranian asylum seeker who was detained on Christmas Island and facing deportation set himself on fire over the weekend, and since has been refused medical attention. Though details are still sparse, we put this to the Immigration Department and received the following response:

“The Department is not aware of any incident in the past week involving a man setting himself on fire. Detainees have access to appropriate health care and medical treatment at a standard at least comparable to the health care available to the Australian community generally.”

We’re still looking for more details, if you know more, get in touch.

Move along. As last night’s party room meeting discussing the Coalition’s position on same-sex marriage wore on and reporters realised they would be missing Cats Make You Laugh Out Loud, the Serjeant at Arms began to move reporters on from the corridor outside the meeting. Many journalists complained on Twitter, and some to Crikey, that it wasn’t a good look and it wasn’t clear what rules, if any, were being broken. It was also tweeted that the order to have the reporters moved came from the Prime Minister’s Office. We asked the PMO this morning why they made the call, but didn’t receive a response by deadline.

Ready for his close-up. Rupert Murdoch has said that he thinks the time has passed for page 3 girls, but maybe not for page 3 men? In September last year Murdoch tweeted “Aren’t beautiful young women more attractive in at least some fashionable clothes?” and it looks like the Oz got the message, with lots of fashionable people on page 3 today. The paper splashed big with photos and a loving account from Darren Davidson of Murdoch’s party at exclusive restaurant Catalina in Sydney yesterday. The headline references the “good and great” who were in attendance, but we’re not sure who fits into which category in Davidson’s estimation. 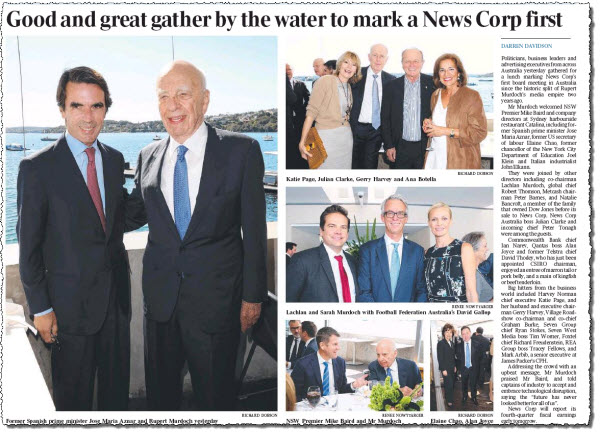 Carnival of Coal. While the federal government announced its less-than-ambitious carbon emissions reduction target yesterday, NSW MPs were invited to a Carnival of Coal, organised by Liberal MLC Peter Phelps. Greens MLC Jeremy Buckingham went along, presumably to see if there were carnival rides and fairy floss but instead it seemed to be some kind of weird coal cult, or “coalt”, as we’ve decided to call it. From Buckingham’s Facebook page, it really does look like some kind of worship ceremony: 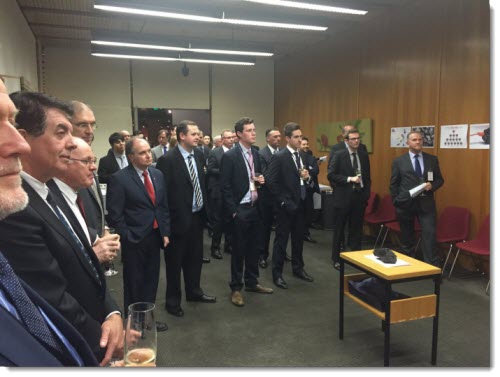 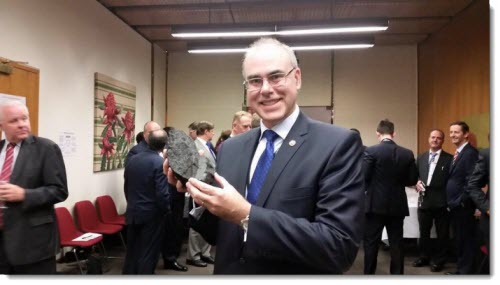 Attendees were greeted by a poster that read “I love coal” as well as another that read “a diamond is a chunk of coal that did well under pressure”. Phelps’ speech echoed Prime Minister Tony Abbott’s affection for the resource, saying “to love coal is to love humanity” and he worried that in computer game SimCity gamers are penalised when they build a coal-fired power station. Buckingham also told his Facebook followers that the event ended with three cheers for coal. And they say wind farms are ugly.

Getting around.  A Sydney-based tipster tells us she saw Sydney Theatre Company artistic director Andrew Upton riding his bike through Balmain this morning, responsibly wearing a hi-vis vest and “solid-looking helmet” while keeping in the bike lane. Our spy wondered why Upton wasn’t driving an Audi — a major sponsor of the Sydney Theatre Company.

It goes on. Following yesterday’s tip about the outcome of Victorian Young Labor’s conference, we hear from another tipster:

“There has always been a split in the right and original the SDA/NUW were working with the Left and cut out the Shortcons, then the SDA split and like half their delegates came to the Shortcons and then the Shortcons worked out a deal where they’d control the Executive but give President to the Left. Altho not ideal, everyone was just happy Josh Gilligan did not get president.”

Although we hear elsewhere that a challenge may be underway and Gilligan could still get the gig. It always seems to be the way that student pollies wheel and deal like they are running the country.

Why does everybody have the same suit on..with a soupcon of colour in the tie denoting which side of the political fence you sit or the colour of your courage.

I’d pay to see a debate between Peter Phelps and the best opponent Crikey Land could muster — provided of course the RSPCA didn’t put conditions on it to protect whichever of its bleating flock was nominated as the representative.

Ahh, “a diamond is a chunk of coal that did well under pressure”, and I suppose for drinks they served both H2O and H2O2.

Lardy – or the usual result of coal’s other main emission, sulphur, H2SO4. Mmmm…