We've lost a Speaker and the captain of our cricket team, but at least it gave people plenty to talk about, writes Isentia's Clovelle Car.

As Member for Casey Tony Smith was quickly announced as Bronwyn Bishop’s replacement as Speaker of the House on Monday morning, I’m sure non-gallery journalists were disappointed in what the World Wide Web could provide them about the new Speaker, specifically nothing, except for his stock photo and where he went to school. He’s a perfect choice really, and this week all the commotion brought him and another potential Speaker into our top 20, at fifth place for Smith and 10th for Member for McMillan Russell Broadbent. The commotion followed other MPs as further scrutiny into claimed expenses uncovered a $12,000 business class trip for Tony Burke’s family to Uluru, which was unfortunate timing given Burke’s vocal opposition to Choppergate and sees Burke move up 15 places this week to third. In more unfortunate timing, three former MPs have taken to the High Court calling for bigger allowances and better travel entitlements from the taxpayer using the same section of the constitution made famous in The Castle. Someone tell ‘em they’re dreaming.

With climate change talks in Paris set for the end of this year, Prime Minister Tony Abbott, Environment Minister Greg Hunt and Foreign Minister Julie Bishop (ninth and sixth place respectively) have announced an emissions reduction target of between 26-28% with the baseline for reductions set to 2005 levels and the PM describing it as economically responsible — “not leading, but not lagging” against other countries.

And with a free vote on same-sex marriage denied by the Coalition party room this morning, it appears this issue won’t be resolved anytime soon, with Education Minister Christopher Pyne up five places this week to seventh after reportedly warning the PM he runs the risk of ‘branch stacking’ by adding the Nationals to the decision making process. 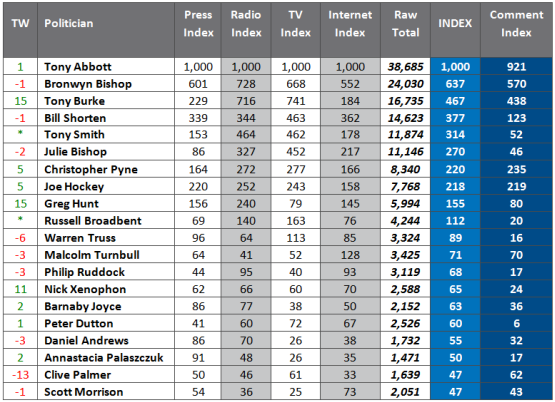 The PM skyrockets in social numbers this week, mentioned alongside most issues and some muffled reminders that it has been six months since #libspill and the “good government starts today” promise.

Will this ever blow over? Not according to talkback radio, with Bishop, Abbott and Burke all mentioned alongside one another in high numbers similar to last week’s.

I’m not one for cricket (sorry), but I’m always happy to join in with a round of Oh Captain, My Captain if anyone’s feeling nostalgic.