There is a lie at the heart of the Coalition's denialism-based climate policy -- and its proposed emissions targets make it more obvious. 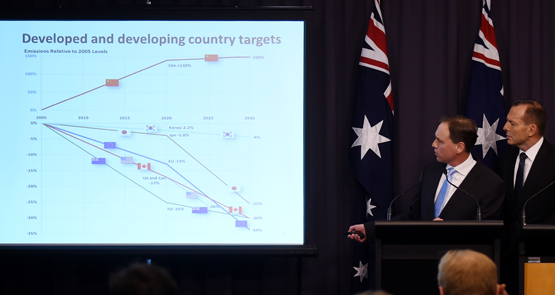 The government’s case for its carbon emissions reduction targets is already coming apart — and not because of pressure from climate action advocates, but, remarkably, from big polluters themselves.

The contradiction at the heart of the Coalition’s climate change policy ever since Tony Abbott took over the leadership has been that is a policy of what to do about climate change for people who think climate change is absolute crap. “Direct Action” is an agriculture and industry handout scheme — originally focused primarily on a personal obsession of Greg Hunt’s, “soil carbon”, before scientific reality caused him to ditch that in favour of more traditional energy efficiency measures, tree-planting, etc. As Malcolm Turnbull pointed out virtually the moment it was released, the numbers never added up — even with the original $ 10 billion price tag (later reduced to just over $2 billion) it would be unable to drive significant abatement, and would require far more money to meet even the bipartisan target of a 5% reduction in 2000 emissions.

Any increase in the emissions reduction target thus means a massive blow-out in the Direct Action budget. It logically cannot be otherwise — if Direct Action is your only climate policy, then mathematically the task of doing more with it will increase.

That’s despite the fact that the government’s target isn’t actually that big an increase. Note that yesterday’s commitment uses 2005 levels as a base for the reduction target, compared to the existing bipartisan 5% target, which is based on 2000 levels, and the Climate Change Authority’s July recommendation for a 30% reduction by 2024 and a 40-60% reduction by 2030, which is also based on 2000 levels. According to a Parliamentary Library analysis obtained by the Greens, that base year sleight-of-hand makes a significant difference: the Parliamentary Library calculates that the government’s 26% reduction is, in reality, only a 19.5% reduction on 2000 levels. That means the commitment announced yesterday is less than a half to a third of the Climate Change Authority recommendation.

Even so, the cost of achieving this increase under “Direct Action” is massive. Remember, Direct Action doesn’t differentiate between abatement initiatives businesses would have undertaken anyway and those that are only being undertaken because of the policy. And there’s no mechanism for preventing businesses from continuing to emit exactly the same level of emissions after they’ve taken taxpayer money to reduce them. And because the policy is implemented via auction, every additional dollar spent under “Direct Action” is less and less efficient, because Greg Hunt starts by buying the lowest cost abatement, then buys the next lowest-cost abatement, and so on. Expand the scheme, you expand its inefficiency, because every extra unit of abated carbon you’re buying is more expensive than the last.

So the cost of increasing the abatement target by 400% will be massive. How massive? Don’t ask climate action advocates — the Climte Institute predicts between $28 billion and $200 billion. Let’s instead ask the polluters themselves. Indeed, the Energy Supply Association — your big power generators and distributors, including the coal-fired power polluters — rejected the idea of achieving the government’s goal via Direct Action altogether, saying “we won’t be able to buy our way to 26 to 28 per cent and beyond”. And the Coalition-aligned Australian Industry Group, normally to be found demanding a hard-right economic agenda, predicted achieving it via Direct Action would cost $100 billion to $250 billion.

Strangely, Simon Benson and Co haven’t run that figure on the front page of the Daily Telegraph.

The government implicitly accepts that Direct Action isn’t up to the task of meeting even its minimalist target, saying yesterday it will be met “through policies built on the successful Direct Action plan”.  The “building” bit will include “prioritising” (whatever that means) a National Energy Productivity Plan, which will involve the states and territories doing … well, something. There will also be a “National Climate Resilience and Adaptation Strategy”, possibly as unconscious recognition that if the world adopted Australia’s emissions target, we’d face the disastrous eventuality of global warming greater than two degrees and better get used to the lower economic growth, poorer health outcomes, higher prices, lower jobs and worse infrastructure that we’ll be handing to our children as a result.

The Coalition has never been able to explain away the lie at the heart of its climate policy. With a bigger target — even the laughably inadequate 19.5% target — the lie just becomes bigger and more obvious.

“Lies, damn lies and statistics (or graphs);
The LNP is clearly not serious about attacking climate change, the announcement appeared to be only a 2 flag moment.
Even so, the Labour party got a mention (great boogey man carbon tax) on the 7.30 report from the Greg Hunt interview.

In plain English, we must reduce at a rate of halving emissions every 15 years. Saying “target” only allows the government of the day to cheat on the following 15 years halving. In particular, committing us to more gas is not a 15-year halving.

What a delightfully ironic finish to another meandering article when you say, “The Coalition has never been able to explain”. When, if ever, will YOU explain why Australian Citizens should back Climate Policies which make no significant effect on the problem, but disadvantage Australians?
Unlike you, however, I don’t use the language in such manners as did you with the use of “lie”. I accept you genuinely believe what you write. After all, you wouldn’t write such inane nonsense unless you did, would you

Big Tone said to Brissenden this morning that his party is mindful of rising electricity and gas prices for the average punter(the economy vs the environment dualism). So, slowly as she goes as far as the war on emissions is concerned.

Interestingly, my energy company sent me a letter the other week stating that my gas prices are changing… I’m guessing this means that they’re on the rise. Assuming that this has something to do with parity pricing vs zero domestic reserve, is there a little flaw in Abbott’s argument?

The purpose of the Coalition’s ‘Climate Policy’ is not to address climate change, it is to pretend to do so in order that voters concerned about climate change feel they can vote Coalition with a clear conscience, without imposing any costs on its mates, the big polluters. Looked at this way, it makes perfect sense.