Tony Abbott's strange same sex plebiscite non-policy is a clunky attempt to bridge his own refusal to accept same sex marriage with the political reality that Australians back it. 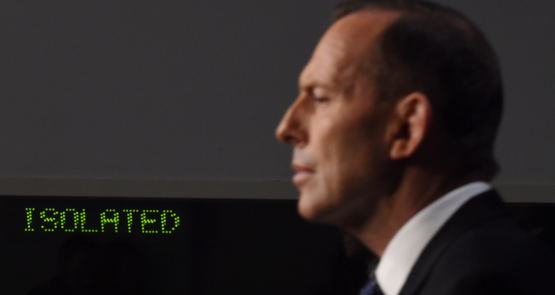 Prime Minister Tony Abbott’s bizarre plebiscite compromise on same-sex marriage is an attempt to bridge the yawning gap between his and his hard-right supporters’ homophobia and the political reality that voters not merely support same-sex marriage by two to one or more, but also support a conscience vote within Parliament on the subject.

The result is an elaborate, internally inconsistent fabrication that again demonstrates the remarkable inability of this Prime Minister to lead the country in any meaningful way.

Explaining the outcome of yesterday’s epic joint party room debate — the Liberals are now a party that wave through the most important policies on climate change, tax reform and other matters, but obsess for six hours over a social policy no-brainer — is in itself ridiculously complex. Abbott’s position is that there cannot be any change in the Coalition’s position on same-sex marriage without alienating supporters of the status quo (a minority even within Liberal ranks — Liberal voters back same-sex marriage 49% in favour, 38% against), but come the next Parliament, by operation of some strange political alchemy, Coalition MPs will be freed to do what they currently cannot — support same-sex marriage by conscience vote. Moreover, the Coalition may then conduct a plebiscite or referendum — Abbott was unclear which — on the issue. Except, to be clear, this isn’t actually a policy position. It’s merely a “disposition”. A disposition not to have a position.

The problem for Abbott and others opposed to same-sex marriage is that their homophobia is grossly out of step with community sentiment. And sorry, but yes it is homophobia. On that, we can rely on Tony Abbott’s own words: “I probably feel a bit threatened,” by homosexuality, he said in 2010, then extrapolated from his own insecurity to the rest of the population, adding “as so many people do”. This was no slip of the tongue; he confirmed his views a day later, adding “there is no doubt that it challenges, if you like, orthodox notions of the right order of things”. To give Abbott credit, his is certainly not the rank and sickening bigotry of a Cory Bernardi, who reflexively conjures bestiality whenever the subject of same-sex marriage arises, nor that of the leader of the government in the Senate, Eric Abetz, who suggests — with zero evidence — that same-sex marriage is damaging to children, but in Abbott’s own words he is scared of homosexuality and believes it isn’t “the right order of things”.

But when Abbott adds “as so many people do”, he’s wrong. So many people don’t. An Essential poll in June showed 59% of voters back same-sex marriage, while 30% oppose it. That includes 49% of Liberal voters. And Liberal voters strongly support a conscience vote (55% to 26%) on the issue as well. Worse, the Labor Party has played this issue cleverly, reconciling their own, admittedly diminishing internal differences on the issue via a clunky conscience vote-becoming-a-party-policy position, as part of their campaign to paint the Abbott government as backward-looking and out of touch.

The politician in Abbott understands this: even killing off the prospect of Parliament debating a same-sex marriage bill this term is damaging — it allows Labor to portray Abbott as out of touch, it frustrates party moderates (especially those whose seats may potentially be at risk in a close election), and it means the issue will simply periodically re-erupt onto the political agenda, depriving the government of clear air to offer its own narrative, whatever that actually is. The result: the disposition not to have a position, whereby supporters of same sex marriage can maybe, at some undefined point in the future, have a chance to bring it about.

That this mechanism — having a referendum at some point between 2016 and 2019, with the wording of the question left up to Abbott — also delays something that 60% of Australians support for as long as possible, is a bonus. Abbott and the Liberal homophobes can’t bring themselves to allow Parliament to vote for same-sex marriage, so they’ll dump the responsibility on voters.

As a jury-rigged fix to a significant political problem, it’s not bad, but the risk is it collapses under the weight of its own contradictions. Why (if not Abbott’s own homophobia) is the “promise” to a minority of Liberal voters about same sex marriage more important to keep than all the other promises Abbott has broken? Why is Abbott talking about a referendum as well as a plebiscite — something he explicitly rejected just months ago — unless he’s planning to adopt John Howard’s tactic on the republic and run a vote designed to fail? How and when will the “disposition” be converted into a specific policy, given there’s only a year until the election? When will the plebiscite/referendum be held (same sex marriage advocate Warren Entsch is already pushing for it to be held simultaneously with the next election)? Will the “same-sex marriage equals sex with animals” crowd be given public funding? And how much do Liberal MPs want to spend the next election campaign talking about same sex marriage?

Above all, it’s another example of how extraordinarily bad Tony Abbott is at leading this country when he can’t demonise Labor or stick “stop” at the start of a three-word slogan. He doesn’t even have the courage of his own convictions, to say to voters that he opposes same-sex marriage, that’s his heartfelt position and they can remove him if they disagree, which might at least garner respect. Instead, there’s this absurd confection of a policy, bought at the cost of further alienating party moderates — especially on the frontbench, where support for same-sex marriage is strongest — and being seen to recruit reactionary rural MPs from another party to shore up his own position.

How long this disposition to have a non-position holds up under the weight of political traffic remains to be seen. It might last until the election. More likely it will only last until the end of Abbott’s leadership — a bridge with nothing on the other side.

This issue is not a dealbreaker sorry!

Abbott: homophobic and yet still cuddles up with his good mate, Alan Jones! Do you think he ever tries to set Big Al up with a “nice girl”? A Catholic one, of course…but then isn’t Alan an atheist? I’m guessing it’s all a bit too much for Tone; too complicated. He’s not good with complexaty…compleksity…cumple….tricky issues.

Bohemian: It probably isn’t a deal breaker for most people, but, it could be the final straw for many. For me, it’s just another nail in the coffin.

It would be a plebiscite not a referendum, since it’s not changing the constitution. It would be similar to the two conscription plebiscites during World War I.

And let’s not forget the real homophobes; and that would be the Christian Right Nationals. Just to double make sure that the free vote gets mothballed, inject some real rednecks into the party room. Ha ha, If you didn’t laugh, you’d cry…